From the perspective of architecture, fashion show is a four-dimensional design that time and space interact closely. The third time House Fiction designed fashion show for YINGPEI STUDIO, has evolved into a minimal drama with physical calculation. It was divided into five stages.

The base of the installation was a big black box with mechanism. The 8-meter-long needle was supported by the box at a quarter of its length . The initial state showed the audience the illusion of balance maintained by the motor. 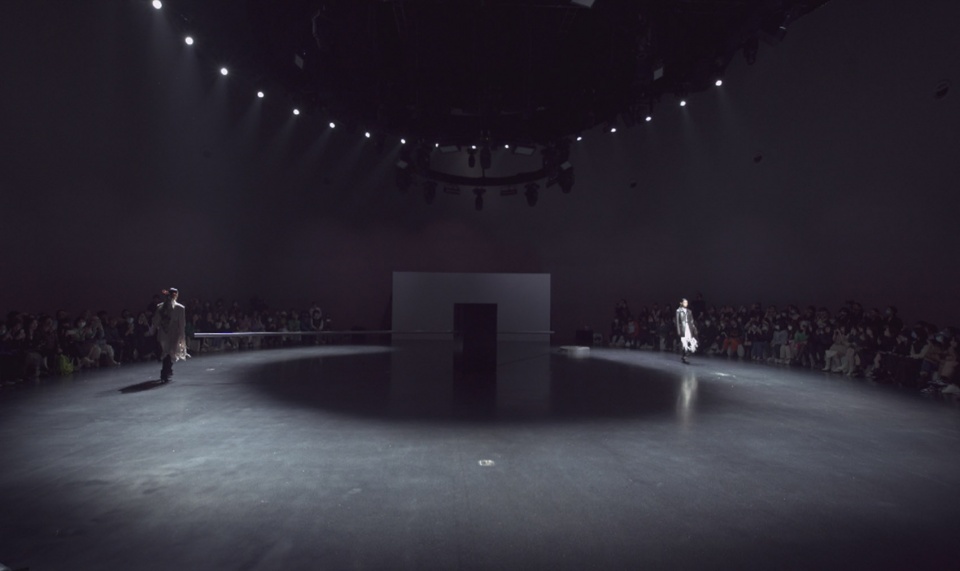 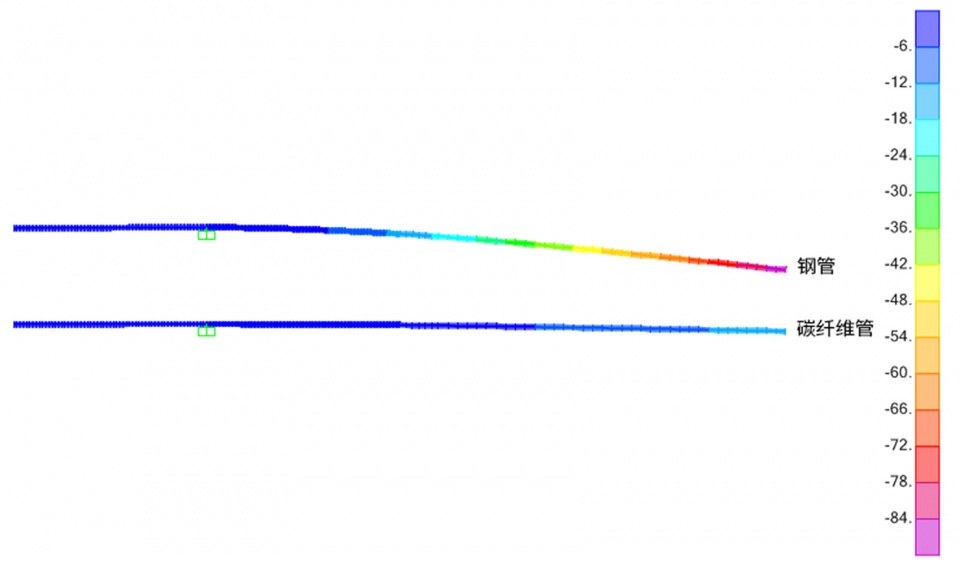 It was necessary to avoid deformation at the end of the 6-meter cantiliver rod (referred to needle).  In order to determine the deformation degree of the rod, the SAP2000 software was used to analyse the deformation of the steel rod with a cross-section of P60x1.5. The results showed that its high density caused thedeformation of the deflection at the end of the rod to be too obvious (see the first row of the diagram below),which did not meet the design requirements. In order to achieve the ideal linear appearance of the rod, carbon fiber rod was chosen because it used for aviation equipment with elastic modulus close to steel but its density is only 1/5 of steel, and the strength is 10 times that of it. After calculation, the deformation of the deflection at the end of the carbon fiber rod with the same cross-section is significantly smaller than that of the steel one (see the second row of the diagram below), which was acceptable on the appearance. The cost of an single 8-meter-long rod exceeded the budget, so four 2-meter-long ready-made rods connected by jacket tube became the solution. The volume of the installation achieved the best performance based on the space size, the height of the model, the line of sight of the audience and the comparison of its own components. 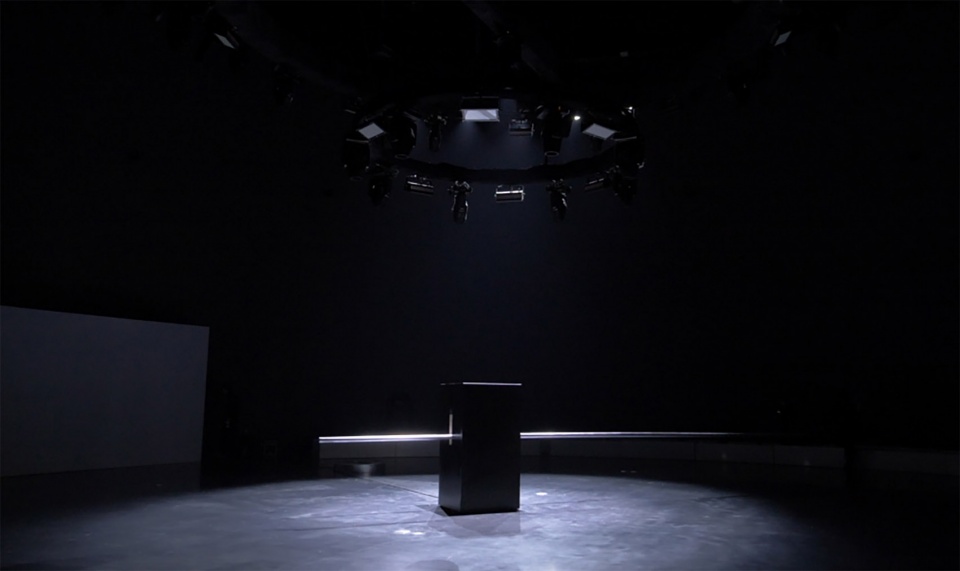 When the interior went dark and the music was turned on, the lights gradually brightened with the appearance of the first model until the runway was illuminated into a C shape. The needle rotated and ledmodels in the circular space as time went by. The movement of one line with two points happened in this 28-meter-diameter circular space. The big black box in the center of the circular space was hidden in the dark. Light was flowing with needle head. The audience became numb to this repetitive rotation in more than ten minutes. 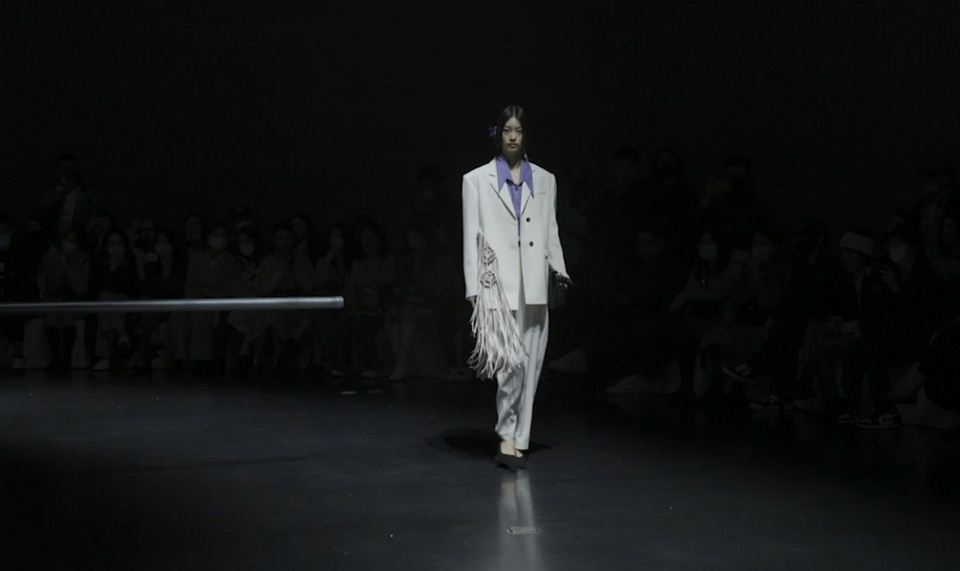 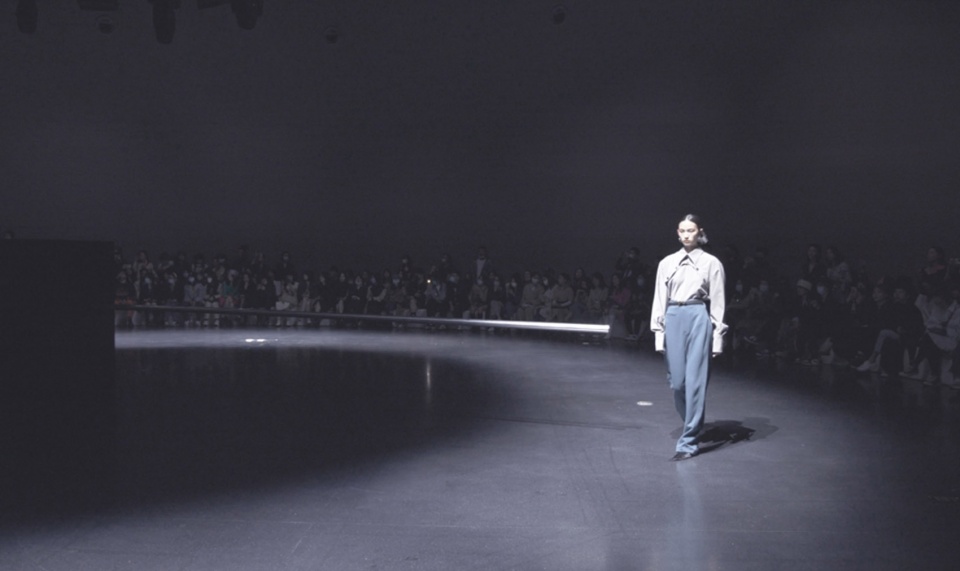 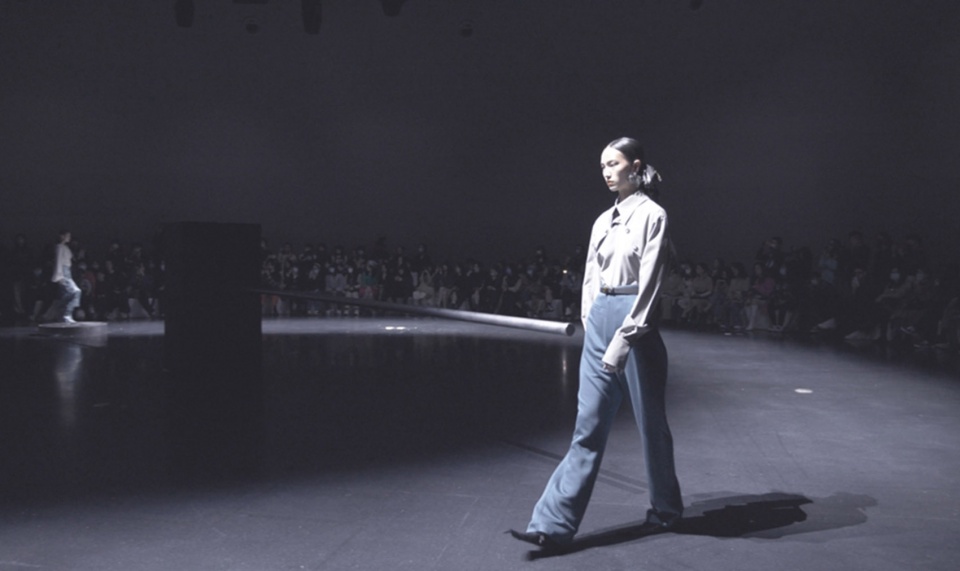 In order to prevent the long rod from shaking during rotation, when testing with a 100mm-diameter steel tube,  it is possible to adjust  with a counterweight in cavity. After changing to a thinner carbon fiber rod, it was necessary to set an extra cylinder pivot in the thickness of the big black box for stability. 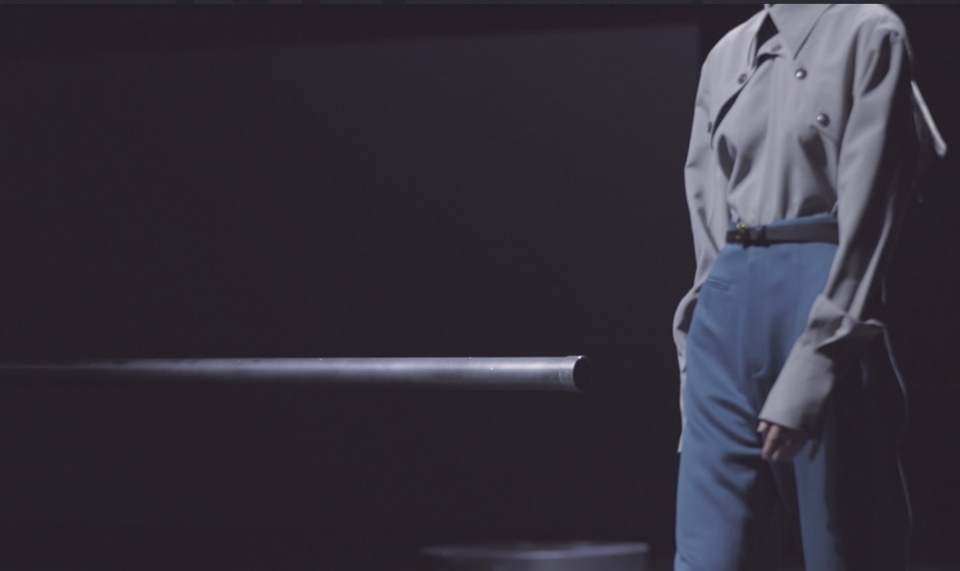 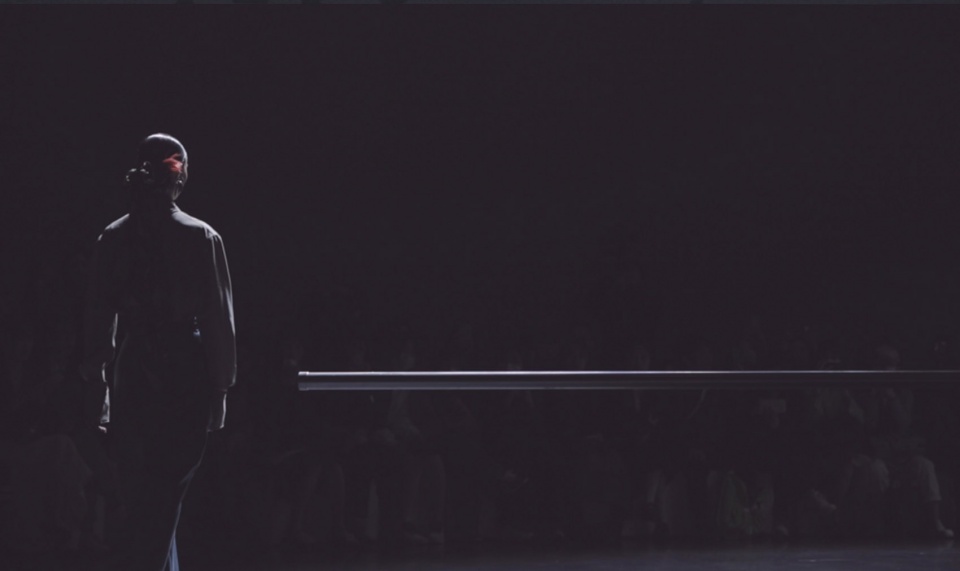 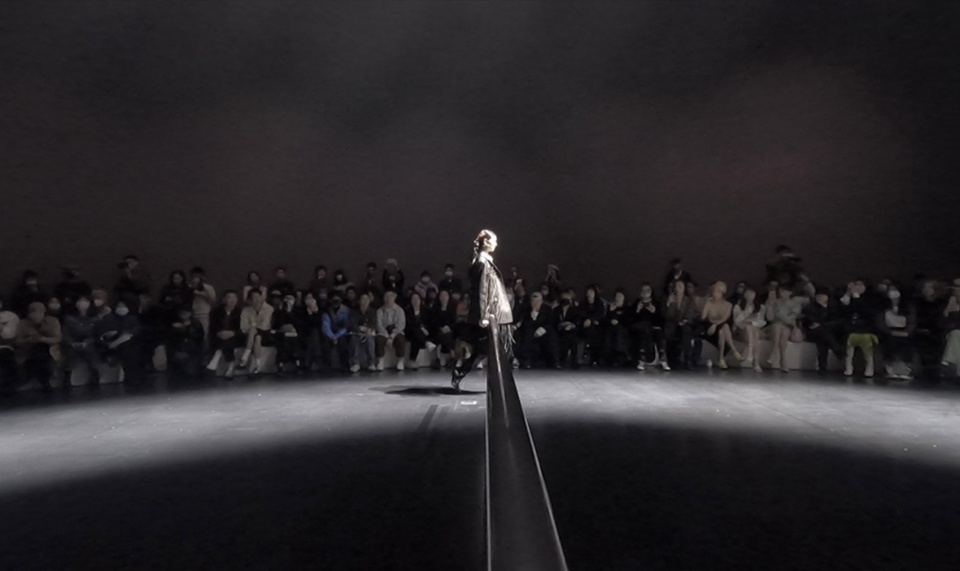 When the last model walked back, the music was turned off and the rotation of the needle stopped. The long end of the rod rose slowly from the center of the circular space with the sound of gears turning. The end of rod took 5 to 6 seconds to rose up to 2 meters height and then stayed for 2-3 seconds. The condition of leverage balance is F1·L1=F2·L2. When the lengths of the power arms (L) at the two ends of the pivot was obviously different and it seemed that there was no power (F) intervention, the rodtilted to the short end. This illusion made everyone puzzled at this time. 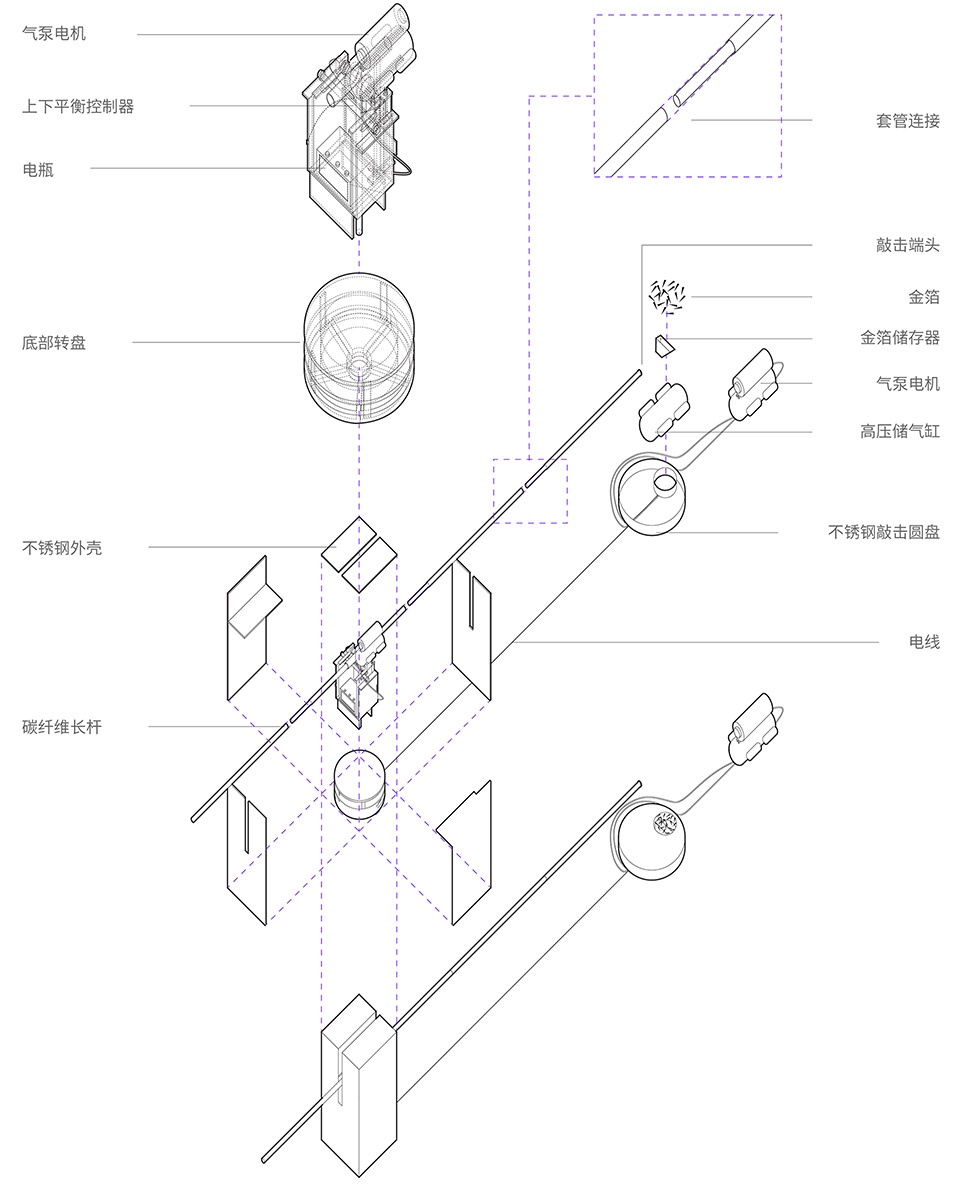 The pneumatic double-cylinder lifting valve was responsible for pushing up one end of the rod and cooperating with the chain bearing set to prevent from what would happen next that the end with the free fall motion rebounded many times, so that the knock motion could be  as nice and clean as possible.

When the scene seems frozen, suddenly the motor was powered off. Following the principle of leverage,  the needle took 0.36 second to complete the free fall motion. The shocking sound of the hitting made by the metal hollow disk hits audiences’ awareness . Physical truth broke artificial illusion,  the “sparks” were ejected and floating in the air with knocking echoes. The knocking sound was expected to reflect multiple times in the circular space and produced strong echoes. 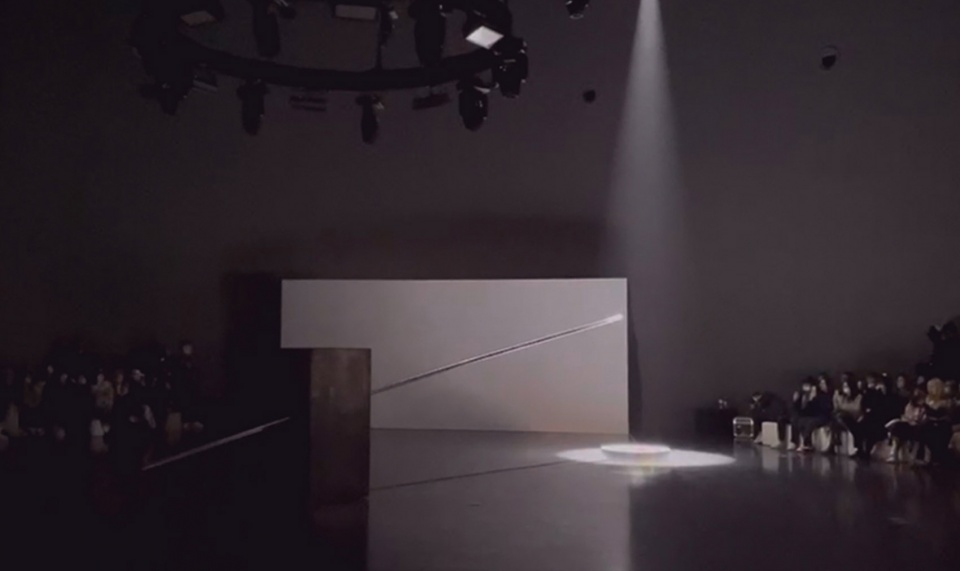 However In the sound effect simulation map, where particles overlapped would produce unexpected harsh noises. This is why there was no seat in the center of the circle where the particles obviously overlapped，and other positions might cause noises were left for passages.  When there were more than 200 audience and their seats, and existing sound-absorbing clothes hung under the ceiling, the reverberation time would be reduced, and the trailing sound would be shortened. In order to achieve shocking echoes, an amplifier was placed in the disc. its connected loudspeaker on lamps frameworkassisting in spreading the sound in the whole space.

Splashing “sparks” helped emphasize the fact that the illusion was broken.  After testing, the champagne gold foil that could stay in the air for a while, reflected the light and was not easy to be inhaled was selected. The gas cylinder under the disk was connected to the gas pump hidden in the backstage, which guaranteed gas would be enough for multiple tests, rehearsals and two consecutive fashion shows after on the same day.

The Finale music suddenly sounded. All the models passed through the splashed sparks, as the ending of the show. The state of the unbalanced needle at this time revealed the original state of unbalanced truth. The light focused from the circular runway to the center of the space. The big black box which hid mechanism took the curtain, led this short play to the end.

▼结尾，模特集体穿过被溅起的火花
all the models passed through the splashed sparks ©好似飞行 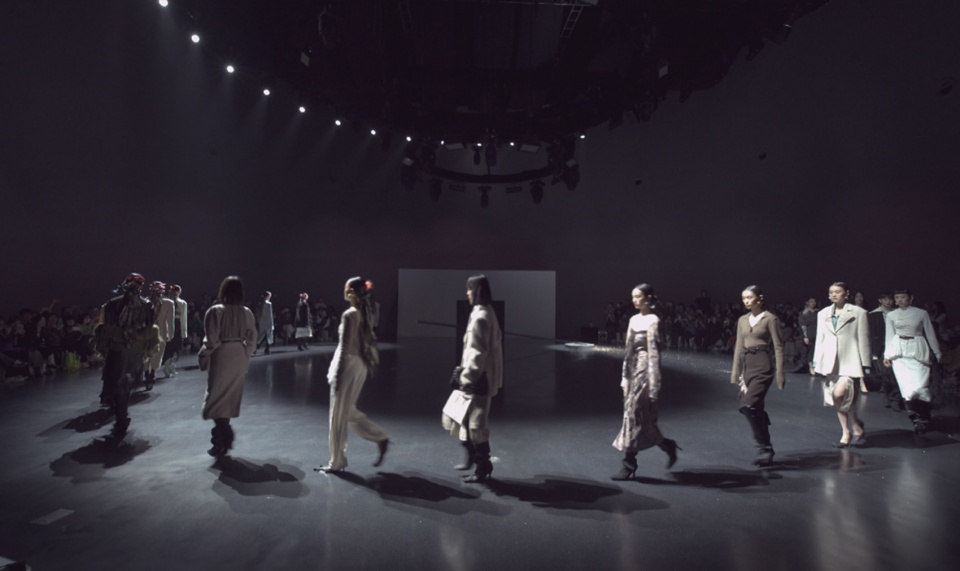 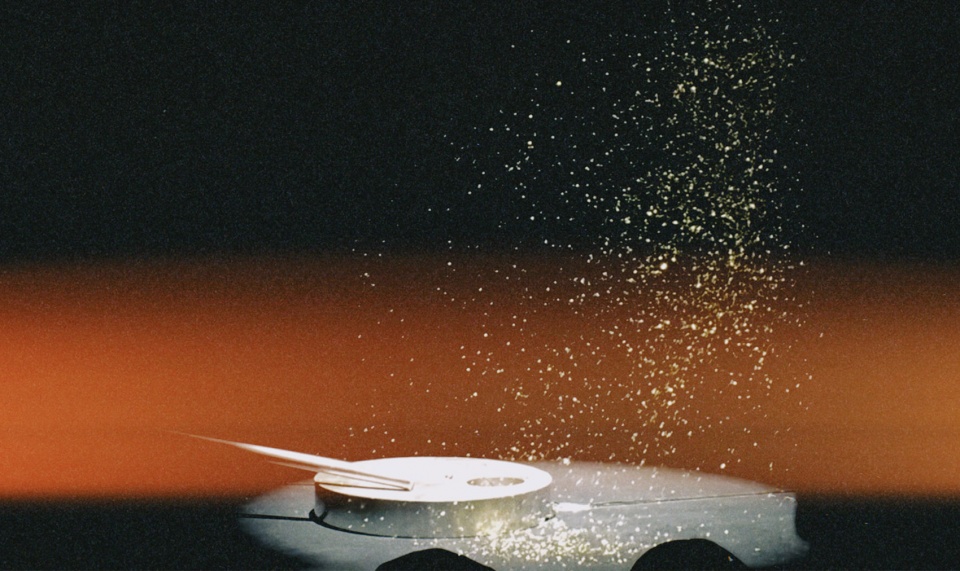 What “The Unbalanced Needle”  is trying to delivery is that being vigilant about daily phenomena and holding a clear awareness of the truth and the illusions that need to be maintained. 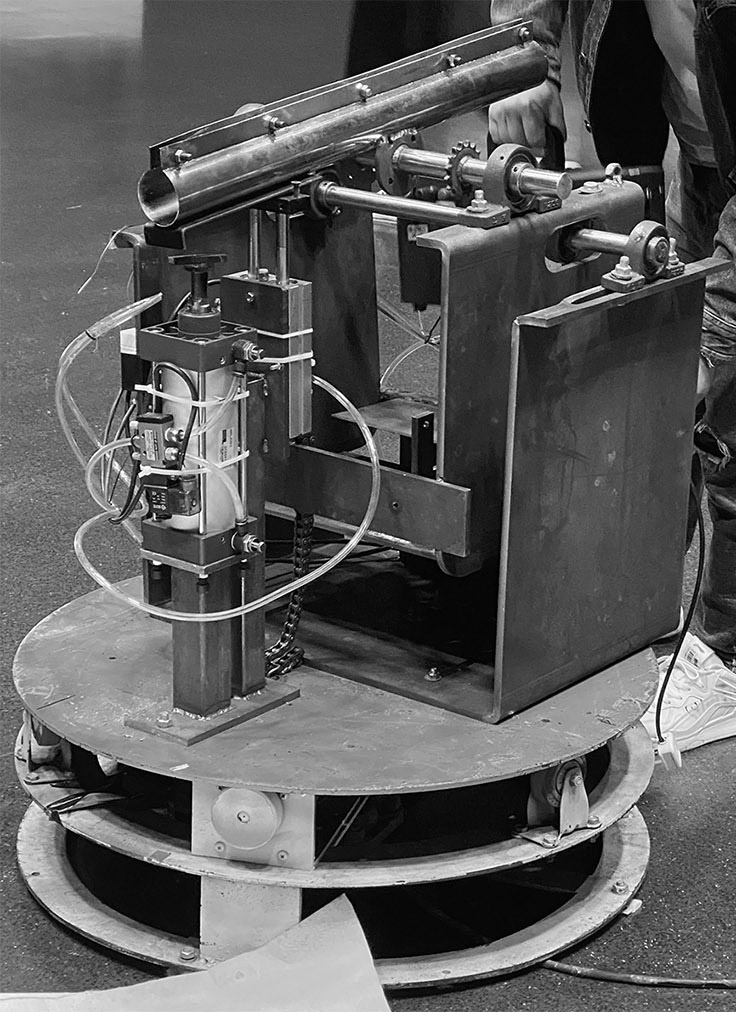 In the previous two collaborations, the architects designed installation based on fashion collection of theseason. And this time, the fashion designer and the architects worked separately after agreeing on a theme in the early stage. The tacit understanding and trust built by the cooperation experience made the communication process in different places very effective. Rather than specific scenery as usually a fashion show does, the conceptual crash leads to qualitative improvement for both the architects and fashion designers. This may be a successful experiment in the cooperation model between designers in different industries. 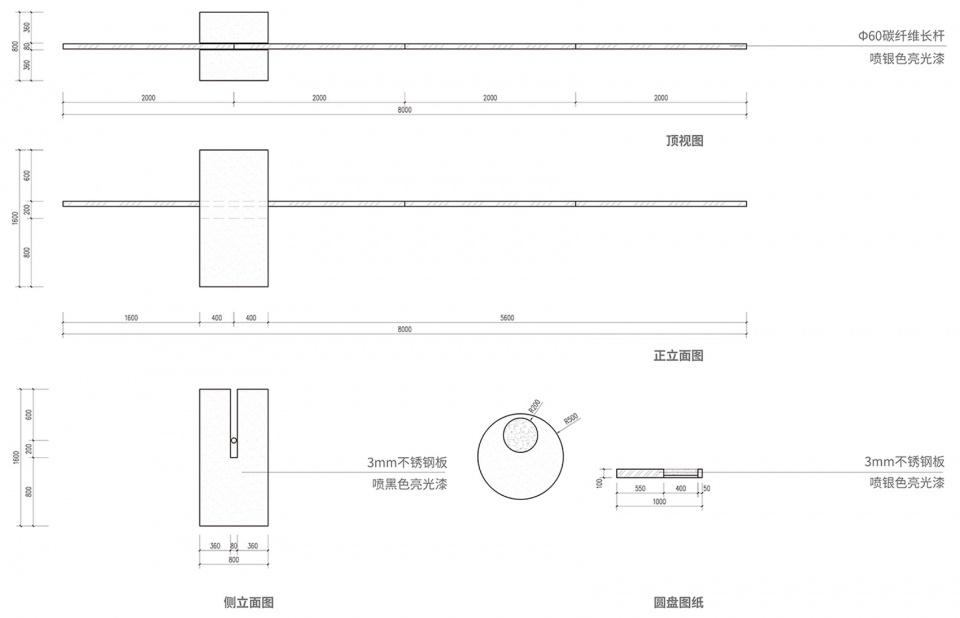