Cloudy Courtyard is located in Shiguan Xiang, Anqing Yuexi, Anhui. Originally, there was an old house in the base, which was a two-storeyed old house with white tiles. Entrusted by the owner, with 10 courtyards, the architect integrates the orderly and free plan and form of “traditional houses in west Anhui”. And through the variations of space, seeing colour and texture, touching rough and delicacy, people could feel fusing warmth and calmness, experience brightness and umbrageous, enjoy nature and man-made at the same time. Cloudy Courtyard is a place where people can live thousands of different lifestyles.

古老世界的表现
The expression of the ancient world

The town Yuexi is the architectural pedigree centre of the Anhui Jiangxi area. Located at the junction of Anhui, Jiangxi and Hubei, Yuexi has been on the main road of Hakka immigrants since ancient times. In the early Ming Dynasty, a large number of immigrants from the Poyang Lake Basin in northern Jiangxi moved from Waxieba to Anqing Mansion and elsewhere. And immigration factors made Anqing a subculture area of Jiangxi culture. Therefore, Yuexi traditional vernacular architecture, especially represented by the “traditional houses in west Anhui”, reflects a genealogical matrix similar to that of the Jiangxi system in the architectural structure and the form, which has many differences from the Huizhou folk houses. 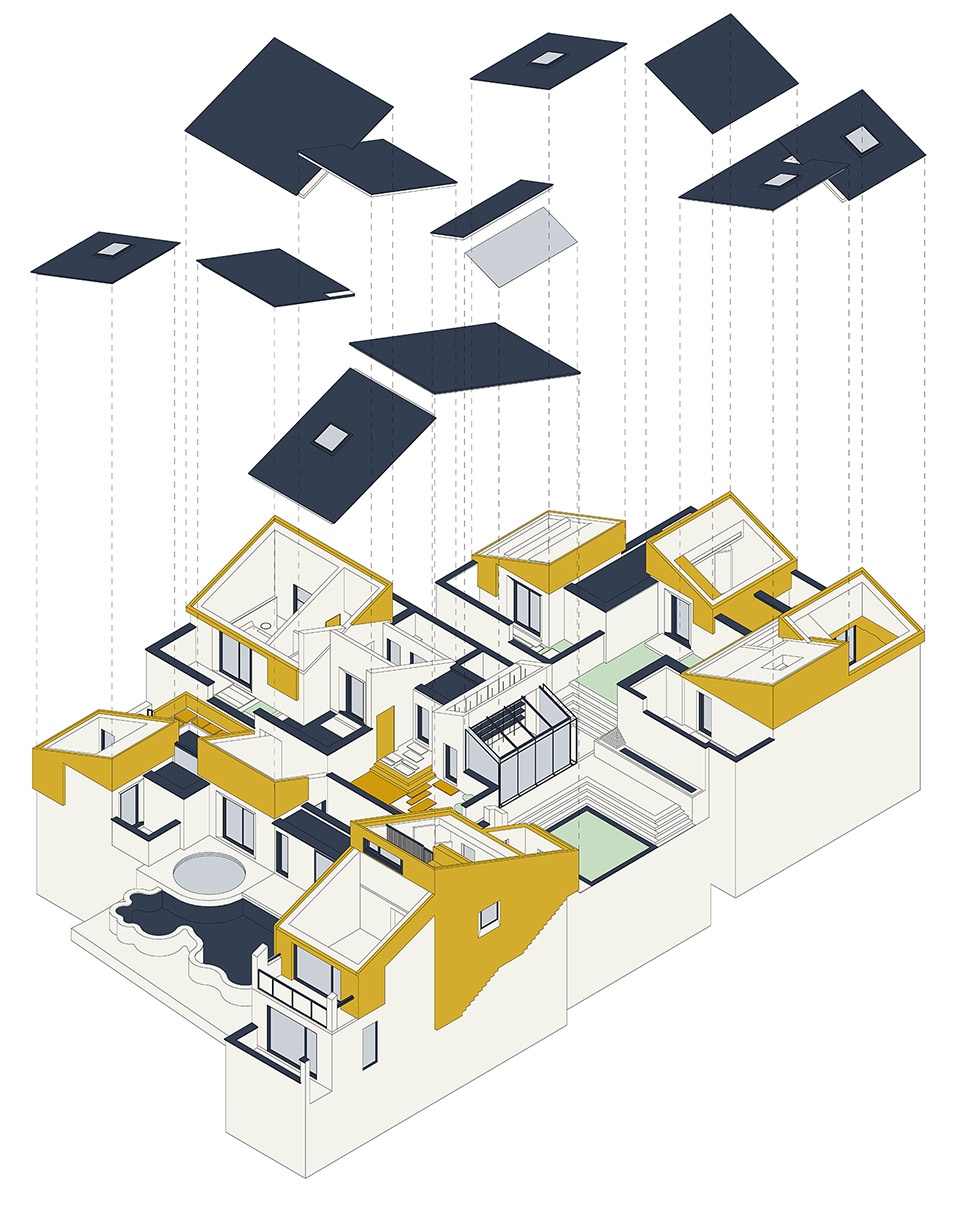 The “traditional houses in west Anhui” is mostly built on the hillside by the waterfront, and it is composed of continuous patios and courtyards to form multiple residential cores. The stepped gable is similar in form to the Ma Tau Wall in Huizhou architecture, while there is a slight difference in proportion that makes the stepped form more unadorned. Perhaps because of its close proximity to the Huizhou residential belt, the “traditional houses in west Anhui” is often omitted in the study of vernacular architecture. 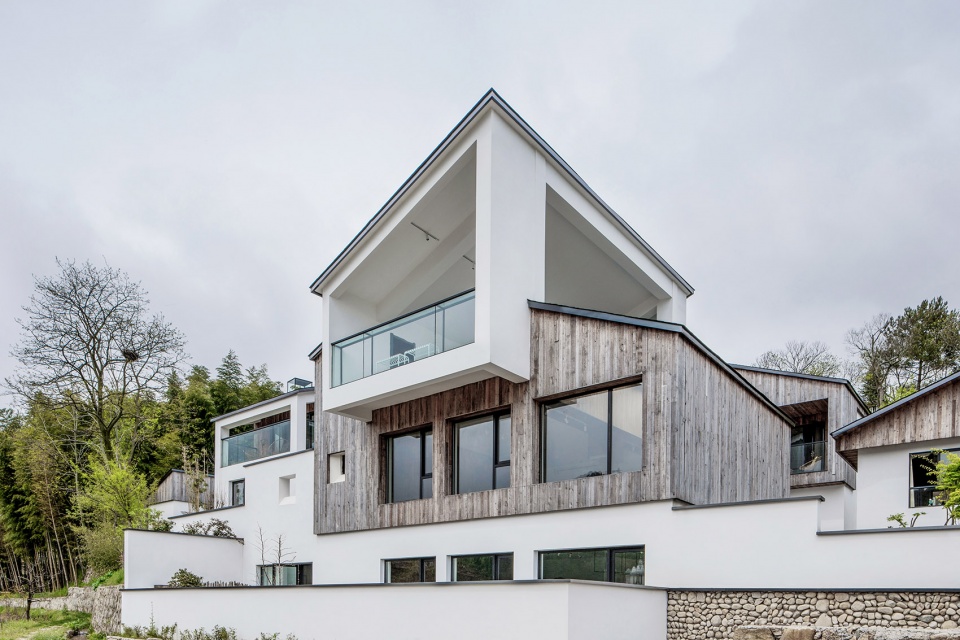 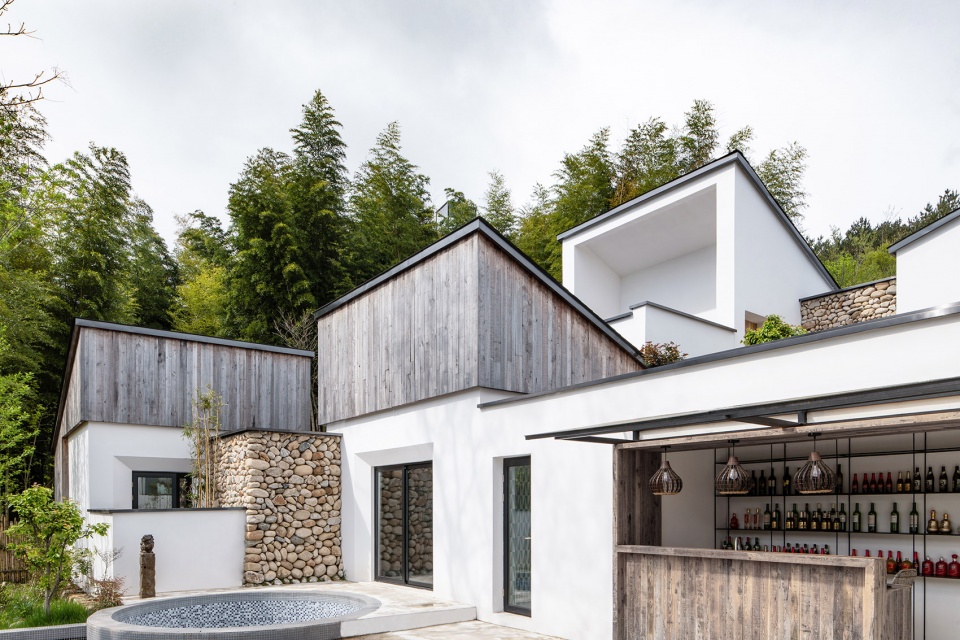 As Le Corbusier said in “Towards the New Architecture”, the country house is a manifestation of the small-scale ancient world. In this project, the complicated courtyards, the architect tried to respond to the orderly but free form as well as the compact and powerful layout of the “traditional houses in west Anhui”. 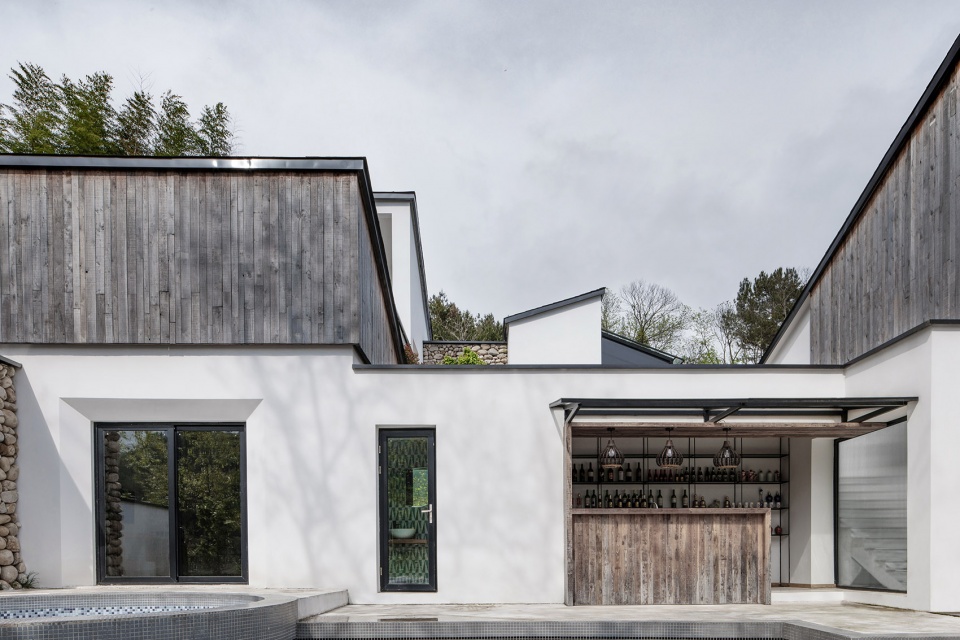 The site of this project is at the end of a rural road, while is also the beginning of the mountainous landscape. Bamboo forests, terraces, scales, elevations, mediums, and even the imaginations that stem from history, have buried many fragmented clues for the design. Through platforms, transitions and openings, the micro-building community introduced the vast mountainous countryside view into the tranquil inner courtyard. 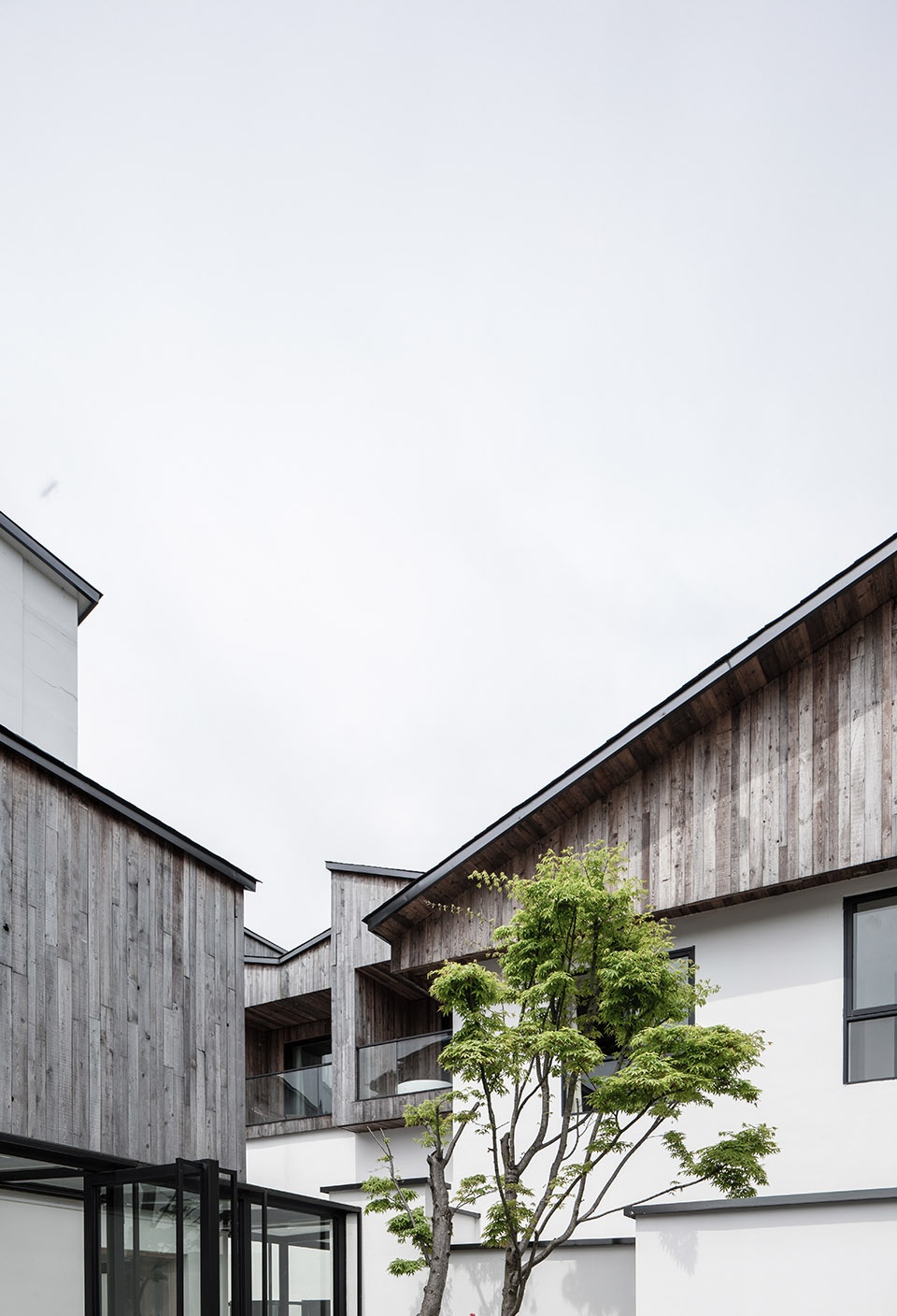 The planning of the cross-shaped courtyard followed the crisscross layout of the “traditional houses in west Anhui”, with mountains as screen and water as its neighbours, the courtyard extended along the vertical and horizontal axes. The old vestibule and back hall of the original “traditional houses in west Anhui” evolved into the first public courtyard and an expanded lobby in the new designed architecture. Those who come and live here are more than visitors from afar but seen as neighbours and relatives in the village, which embodies daily but unusual emotions. 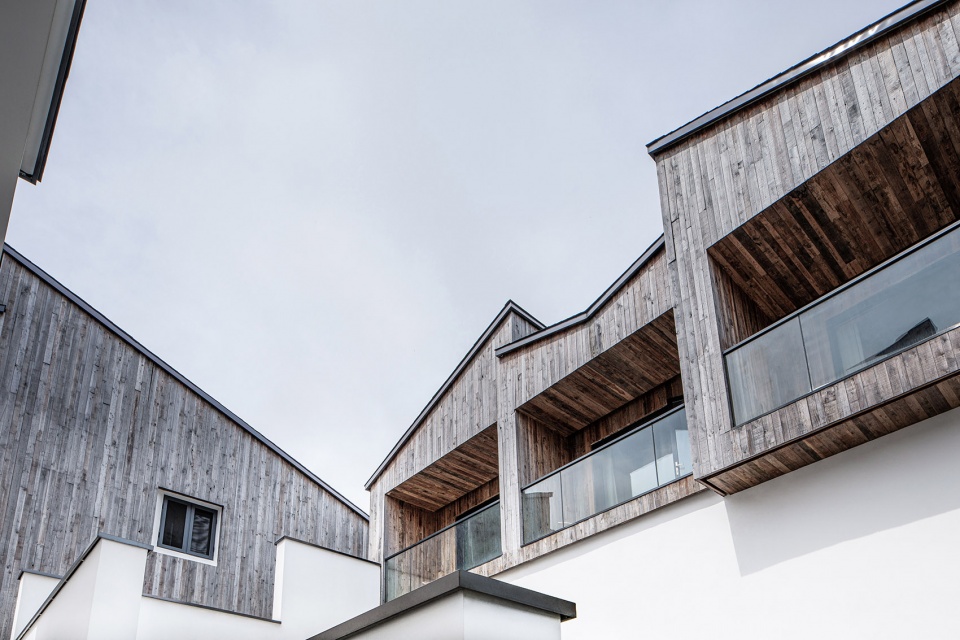 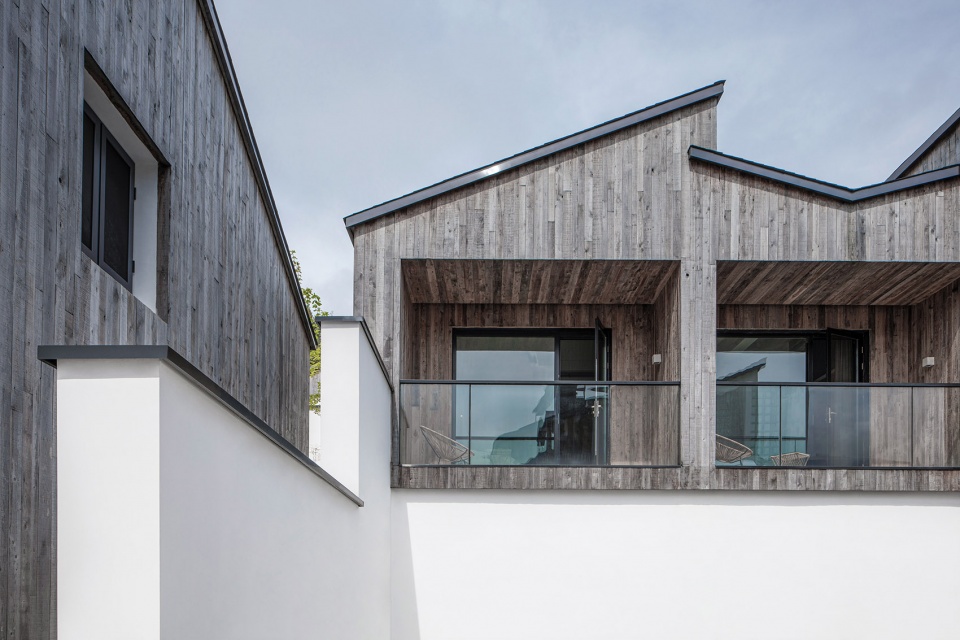 The residential courtyard constitutes the core of the project. The scattered terraces are stacked on layers of courtyards, and the alley tortuously winded. At every moment of pause,  visitors could capture a unique landscape whenever they stopped. The building was constructed in an ecological and primitive way, such as picking up the pebbles in the mountain stream to make them the base of the wall and cutting down the bamboo from the mountain forest contracted by the owner to build the fence. The design of the courtyard wall originated from the Ma Tau Wall in the houses, retaining the simple colour tone, emphasizing the tortuous and elegant lines. The original sense of time and nostalgia of the base, combined with some kind of town characteristic of the village, transformed into a calm temperament. 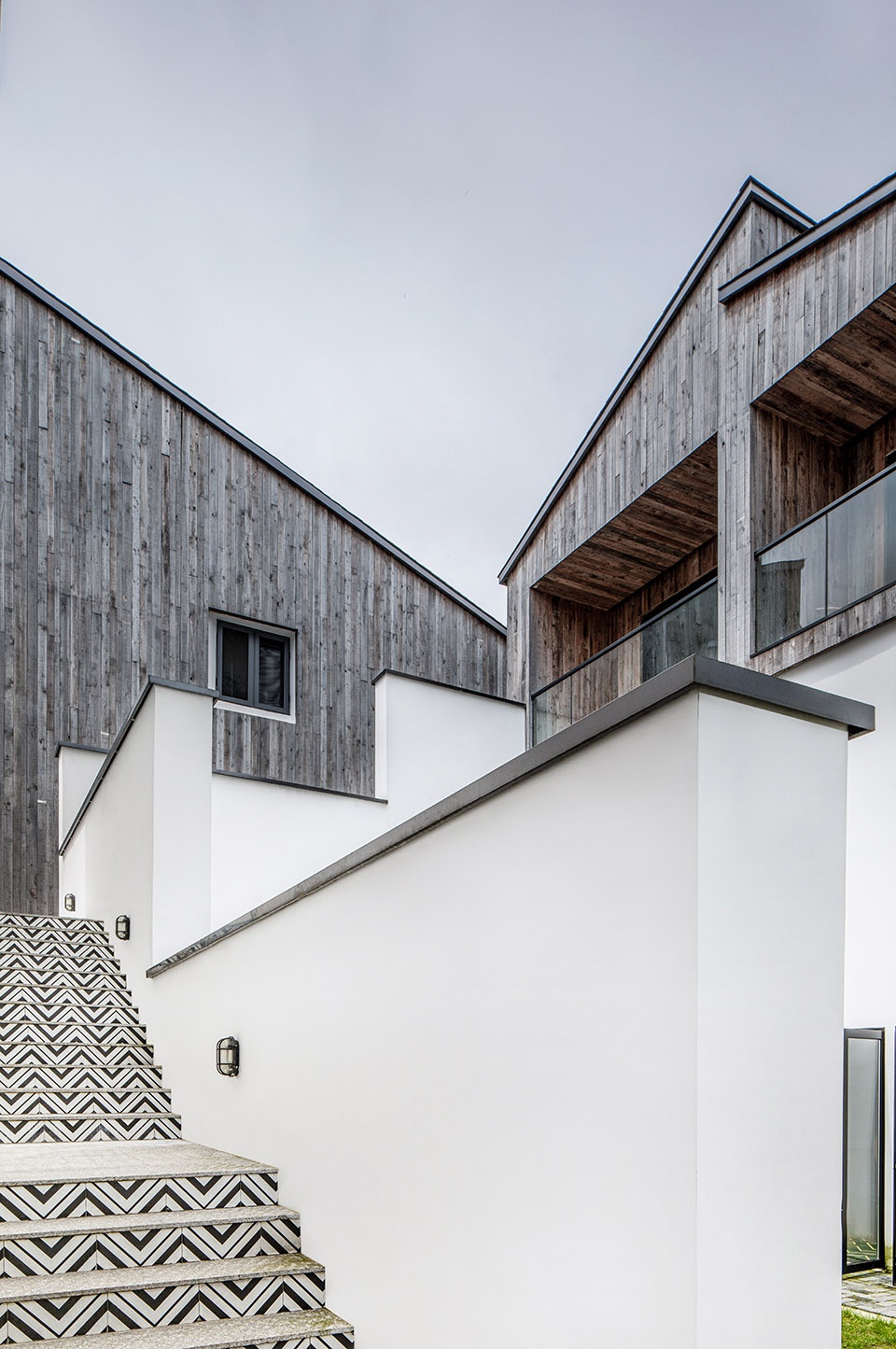 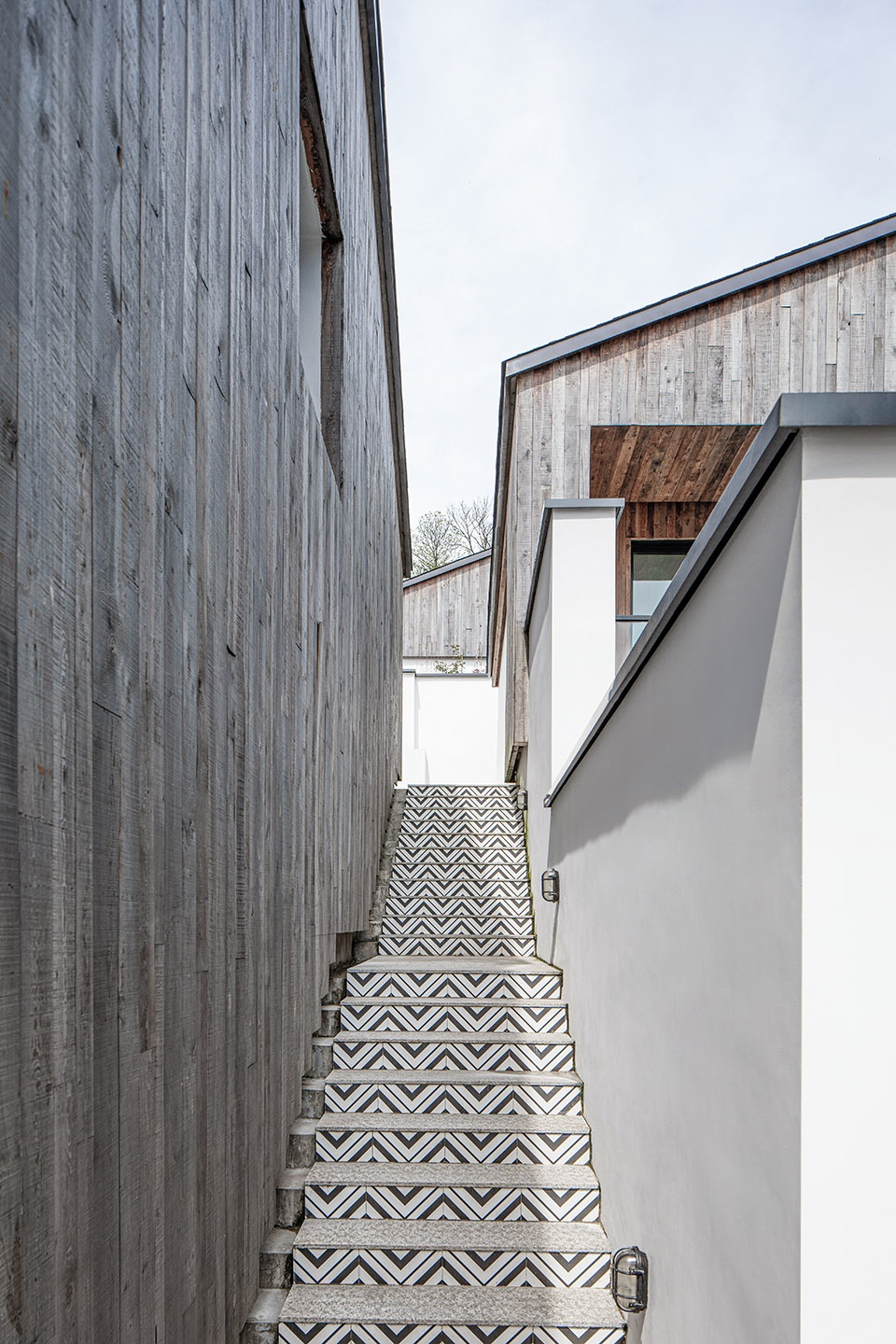 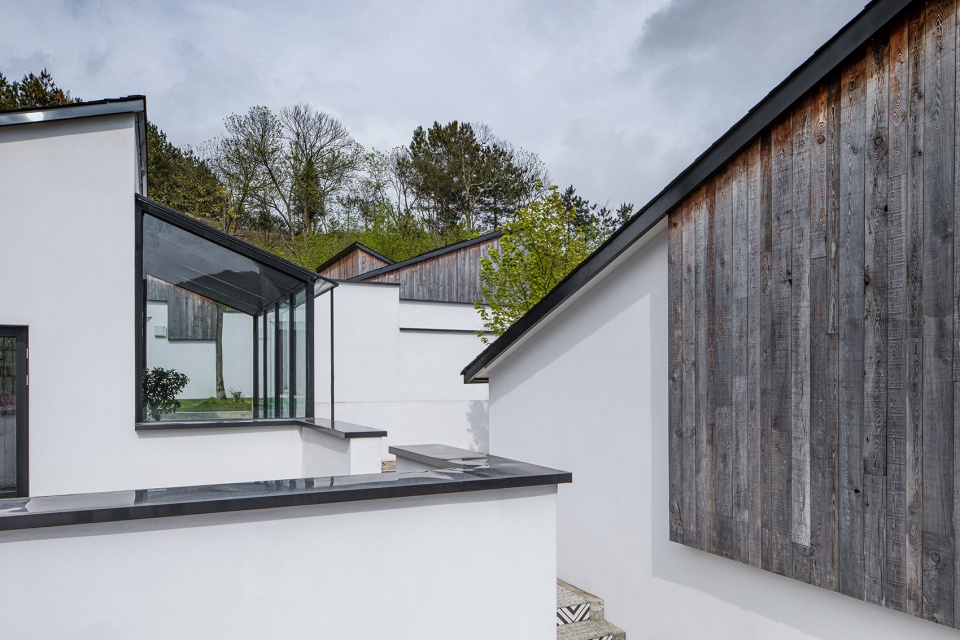 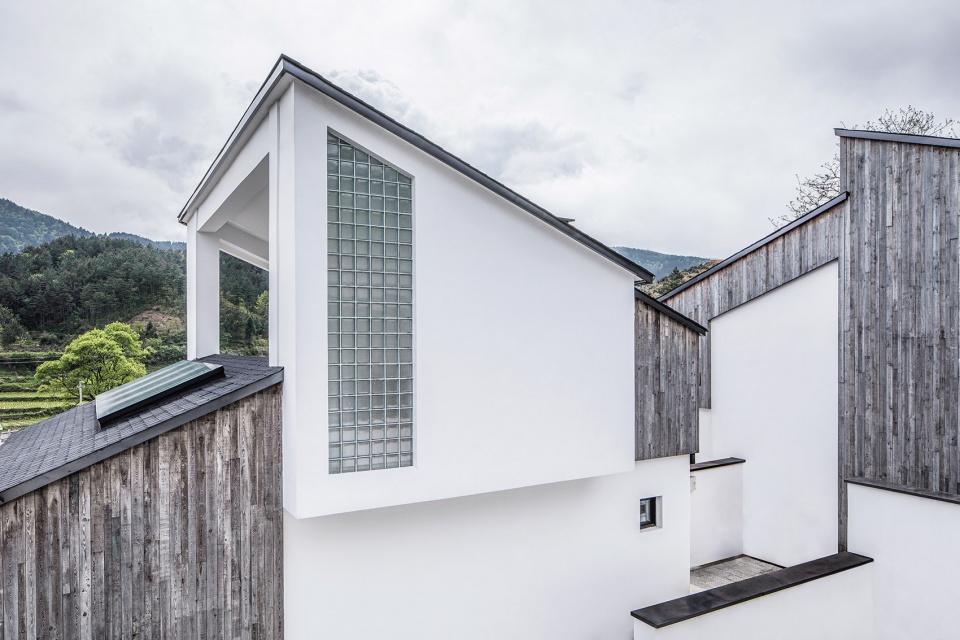 Owing to the high altitude of the area, as well as the scattered architectural spaces and the well-designed patios, a stable microclimate was formed in the building, with natural ventilation forming air convection, and natural plants shielding direct sunlight. 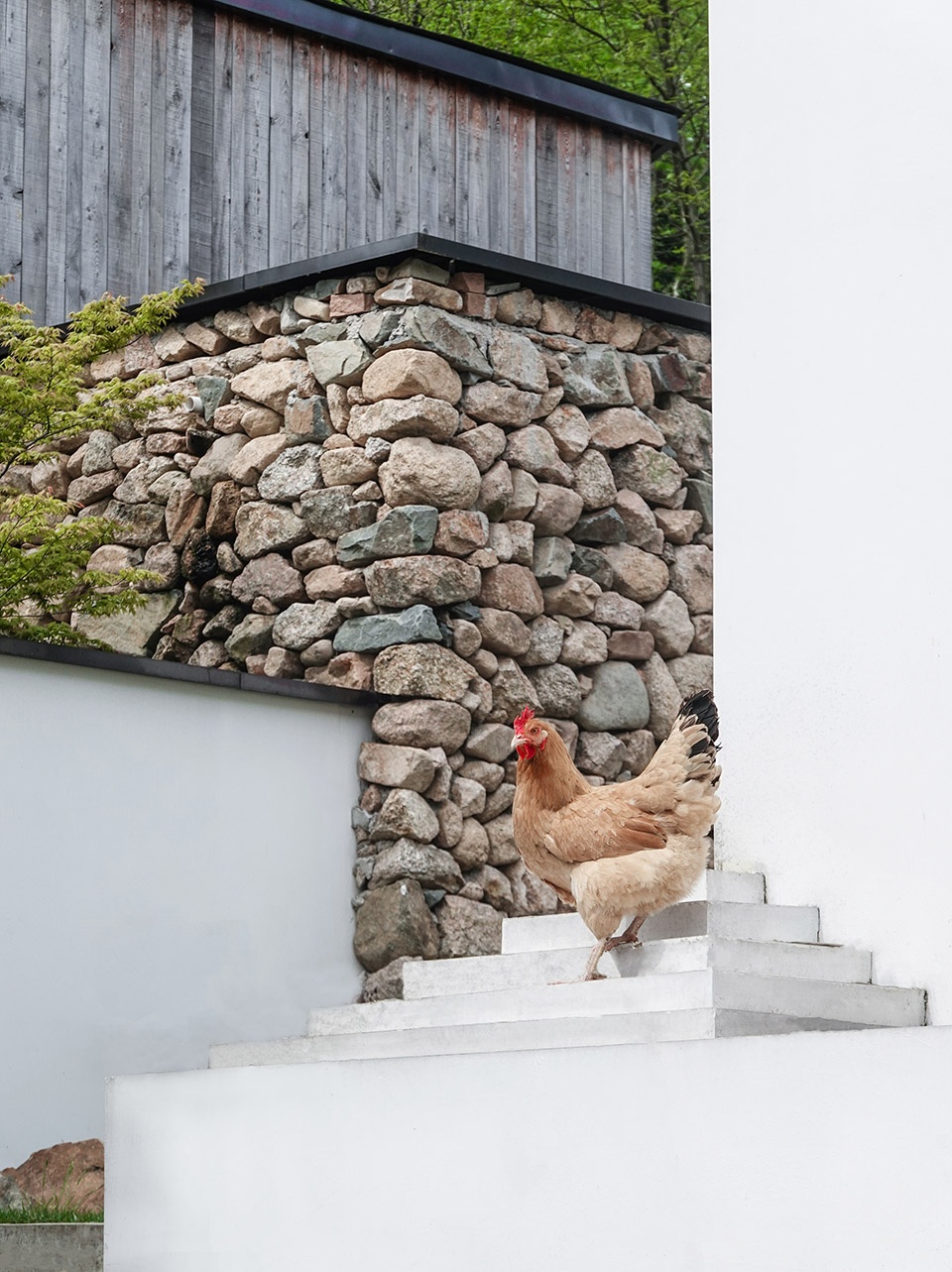 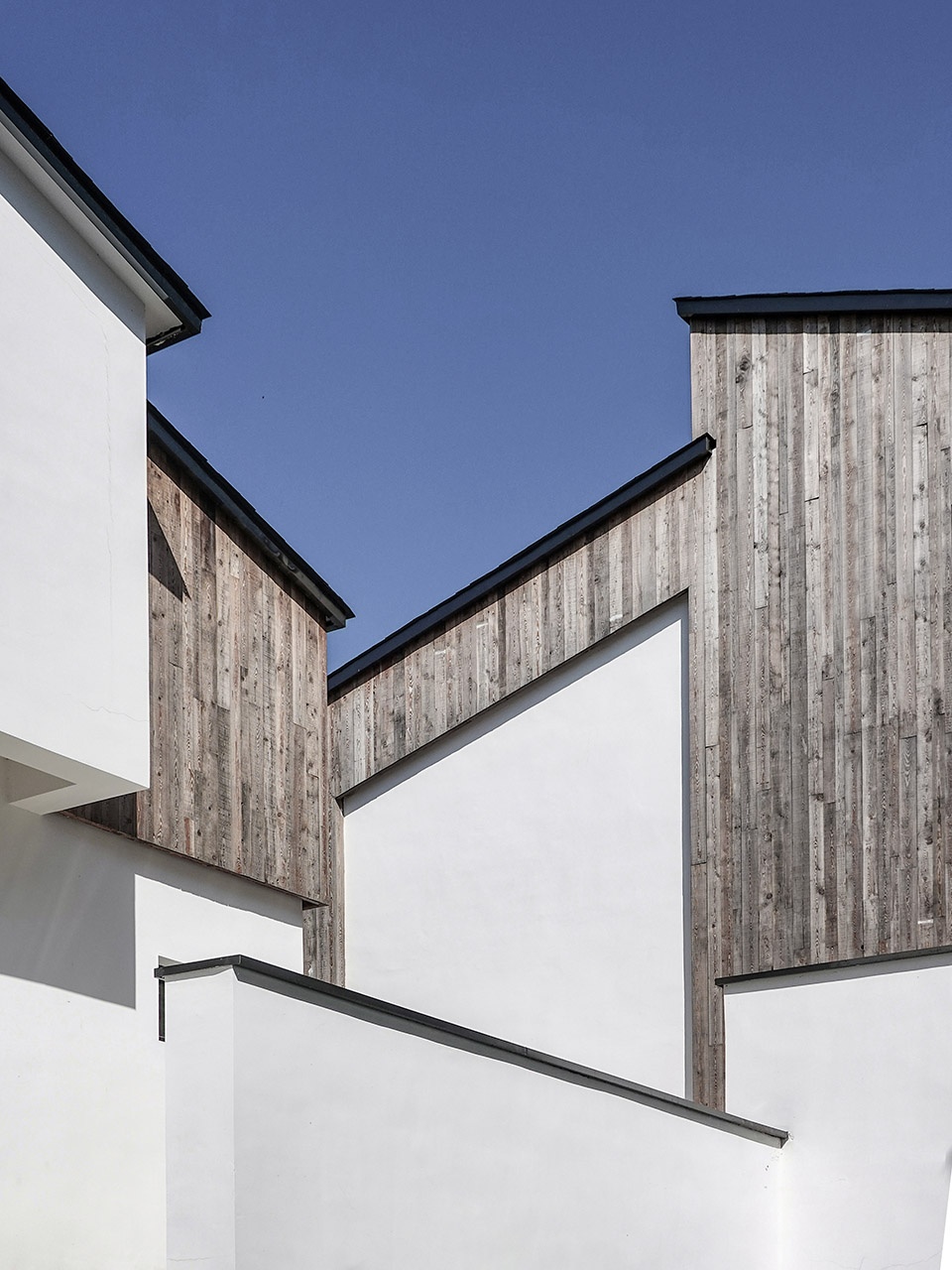 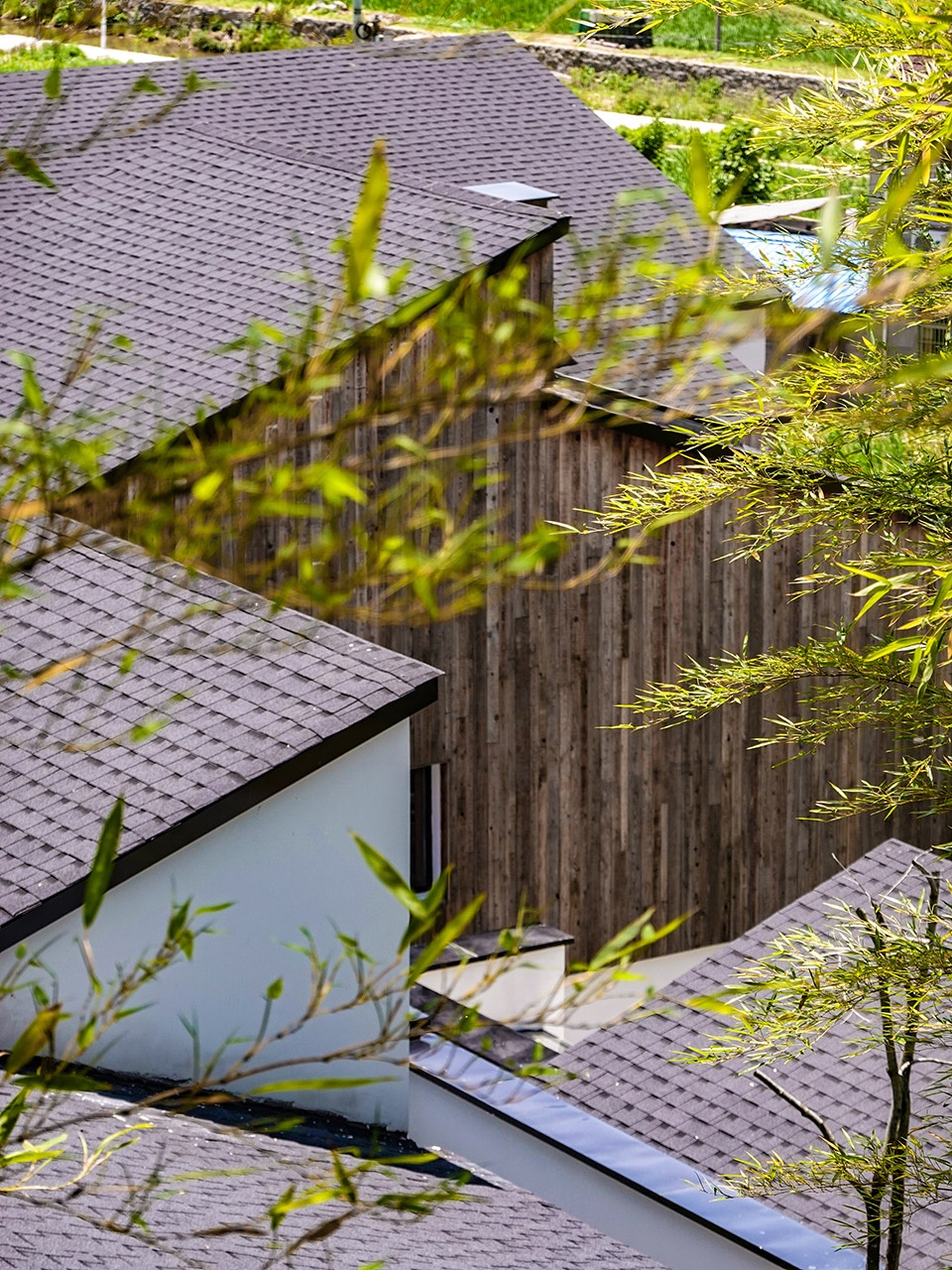 In Chinese architecture, the fire pond did not form a complete and continuous inheritance, or rather, the dependence and worship of fire have been transferred to the “kitchen”-that is, the “Kitchen God”. “The Yellow Emperor Sets the Stove”-People design the spiritual space structure of the building following the culture about God. From the rigour of setting up a kitchen to the strong sense of ritual in the activities of offering sacrifices to the kitchen, around the “kitchen”, family and social activities gradually unfold into a vivid picture of daily life during the long time living with fire. 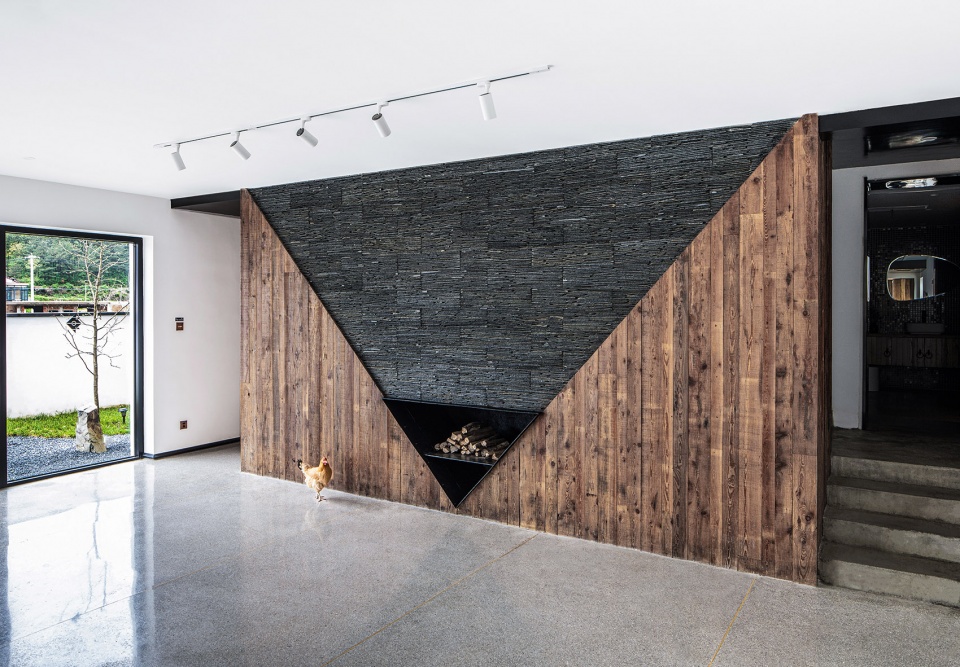 In this project, we once again invited the Kitchen God, the “home fire” that has been burning for the “dry soul” for thousands of years, from the kitchen back to the centre of the building in the hall. Wood, stone, metal, and customized thin steel shelves depicted the warm flames of winter and the imagination of joyful summer barbecue clearly. Material space, decorative elements, daily commodities, as well as mysterious and ancient beliefs gathered together to form a complete system with “home fire” as the core.

The B&B is a place with a great sense of drama and power-it naturally mixes the new and the old, the courage and keenness, the bold publicity and the intimacy of the private sphere. From design to construction, the architect’s concern for the site runs through which affected the materials, structure and final presentation, allowing the site to show the nature and culture, so as to create a slightly strange rural landscape. 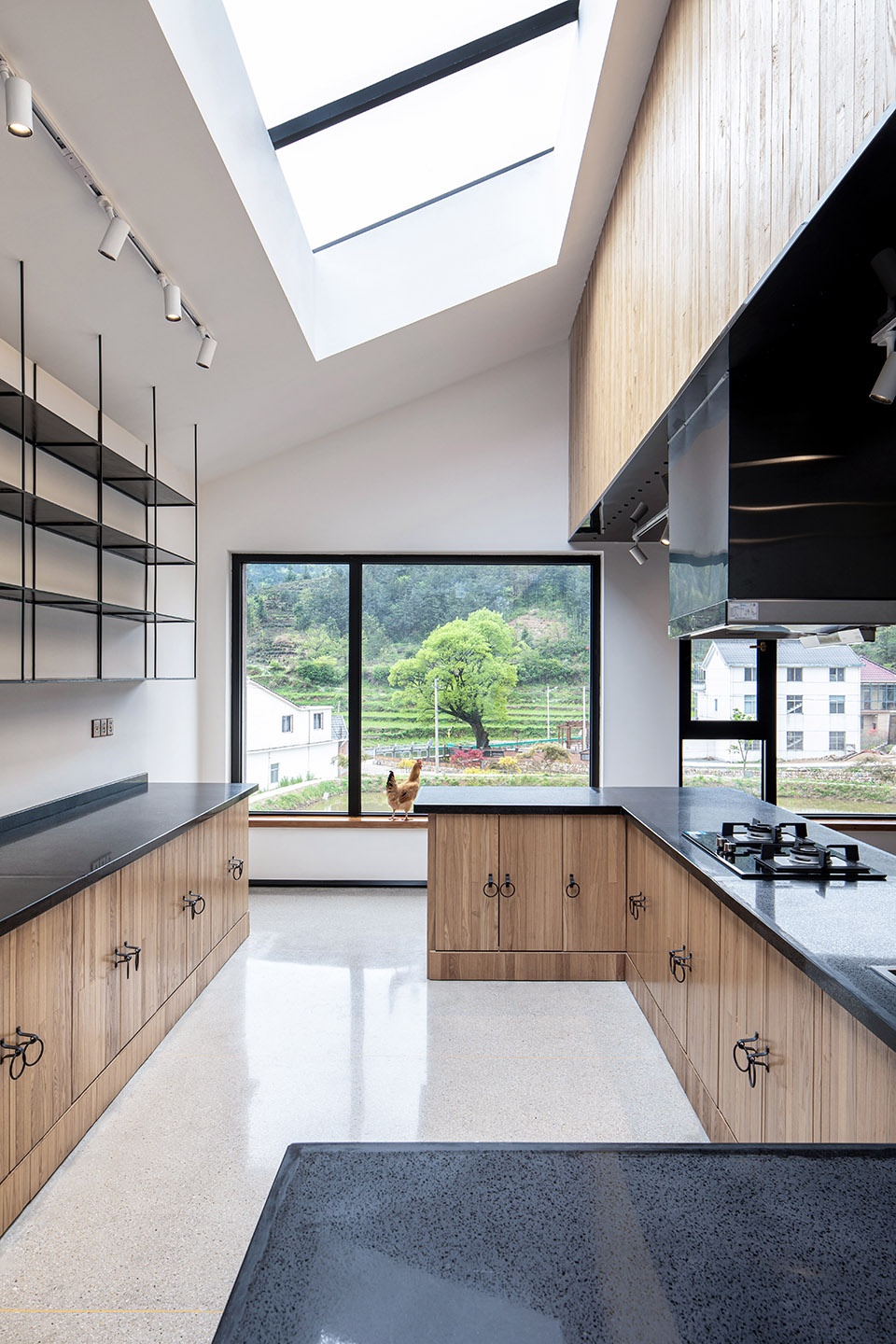 Stone walls, weathering steel, encaustic cement tiles, water, soil, sand and gravel…the rich texture of the materials formed the “hometown colour” of people’s memory: it is the colour of the newborn grass and the wisps of smoke. It could evoke complex emotions and amplifythe momentary sensory experience, and attract people’s attention to many sensitive details: the touch of sand and stone under their feet; the sound of the breeze blowing through the woods; and the rhythm of the water reflecting on the walls. The architecture is symbiotic with the land instead of just building on the land. Every little thing could become especially interesting here. Rain, snow, sunshine and breeze, the change of weather seems to bring various festive celebrations to the building. 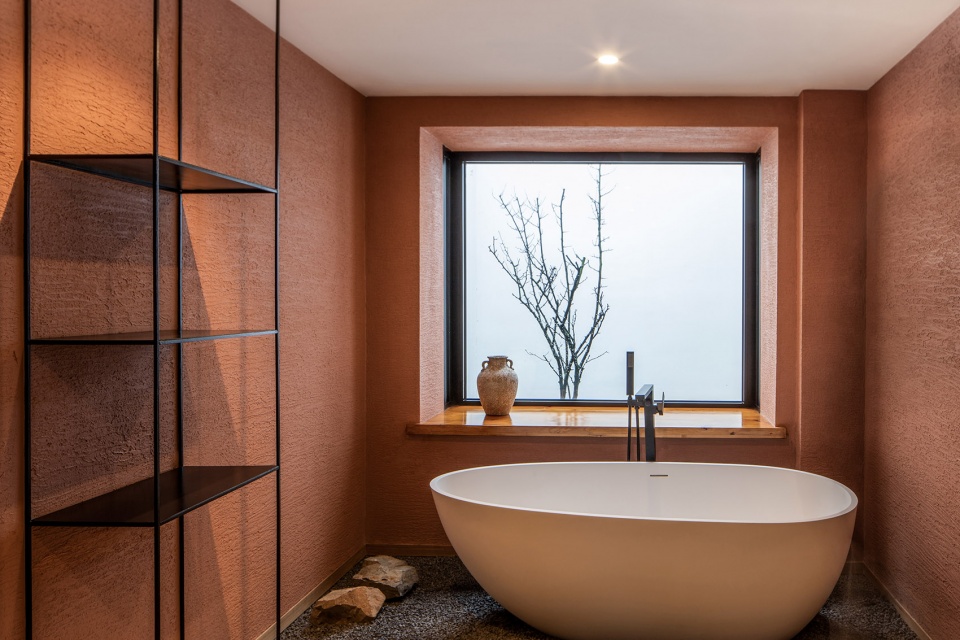 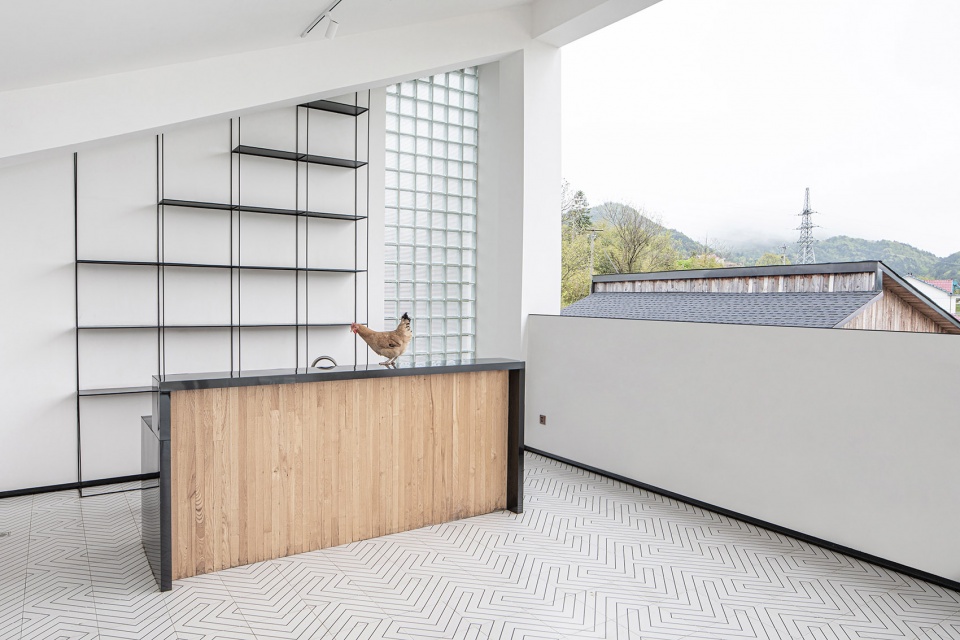 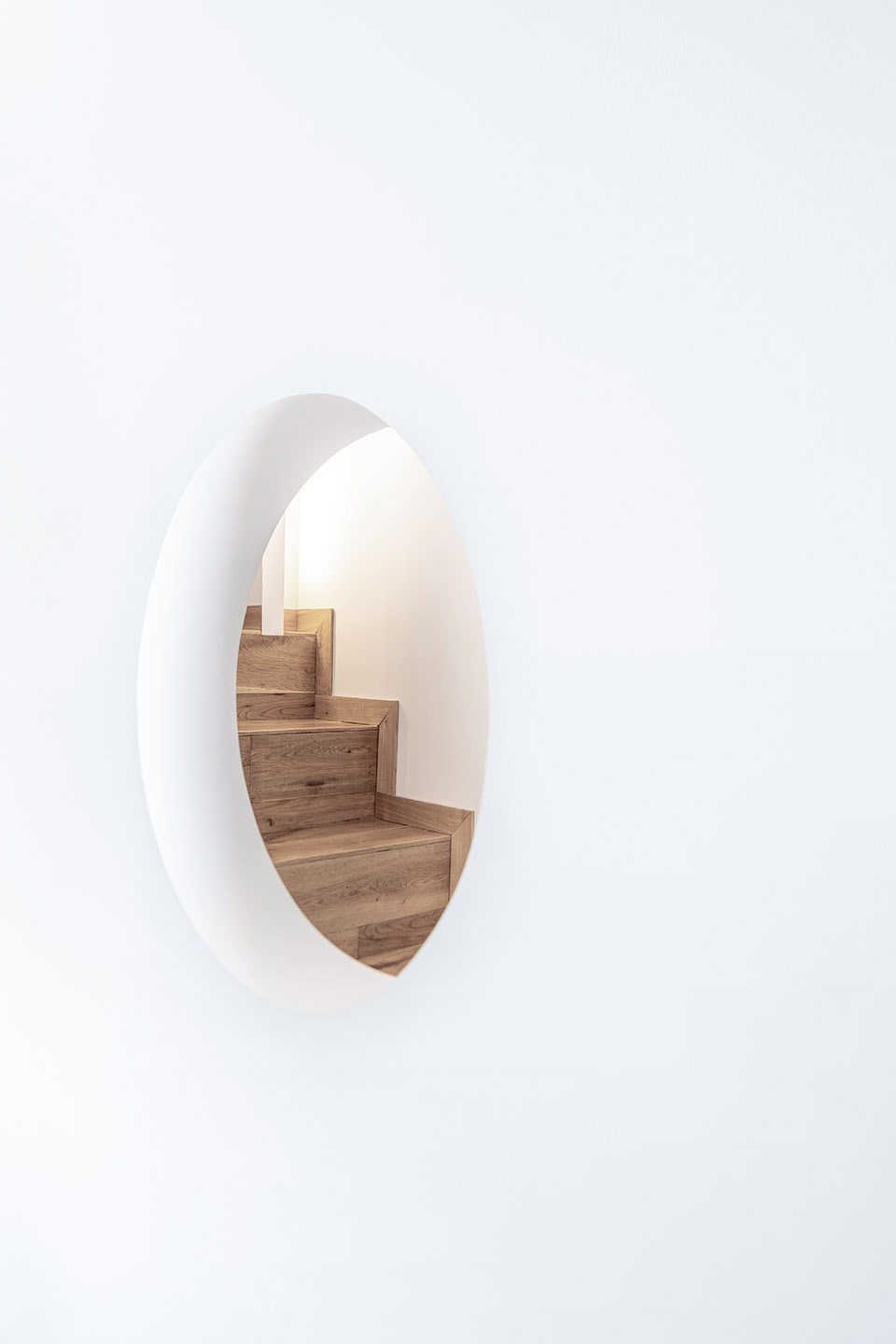 On the day when this project was completed, we went up to the mountain to visit Huike Temple (Huike is Bodhidharma’s student, a famous zen master in ancient Asia). It seemed that there was still drizzling when we set off, while the firmament above the clouds had become clear and bright after we went up the lofty mountains. Sitting on the top of the mountain, looking across the thick sea of clouds in front of us, the verdant mountain top loomed under the trees, and the blue sky seemed to be lifted lightly above the mountain. The distant mountain is accompanied with chaotic clouds, while the green peak is dimly visible-the poem narrates the clear and picturesque view of the mountain in Yuexi, however, isn’t it also the scenery of Cloudy Courtyard? 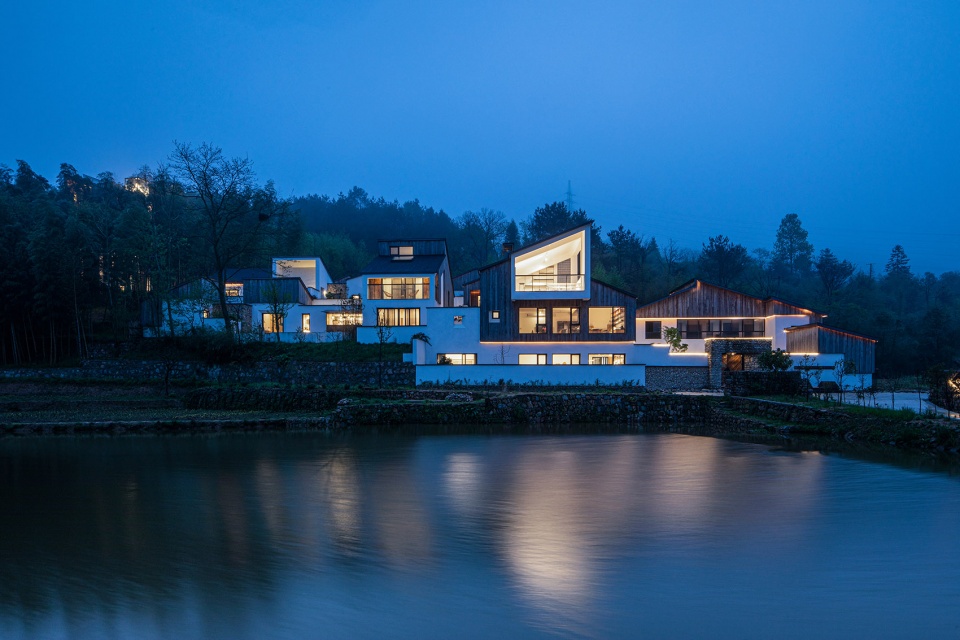 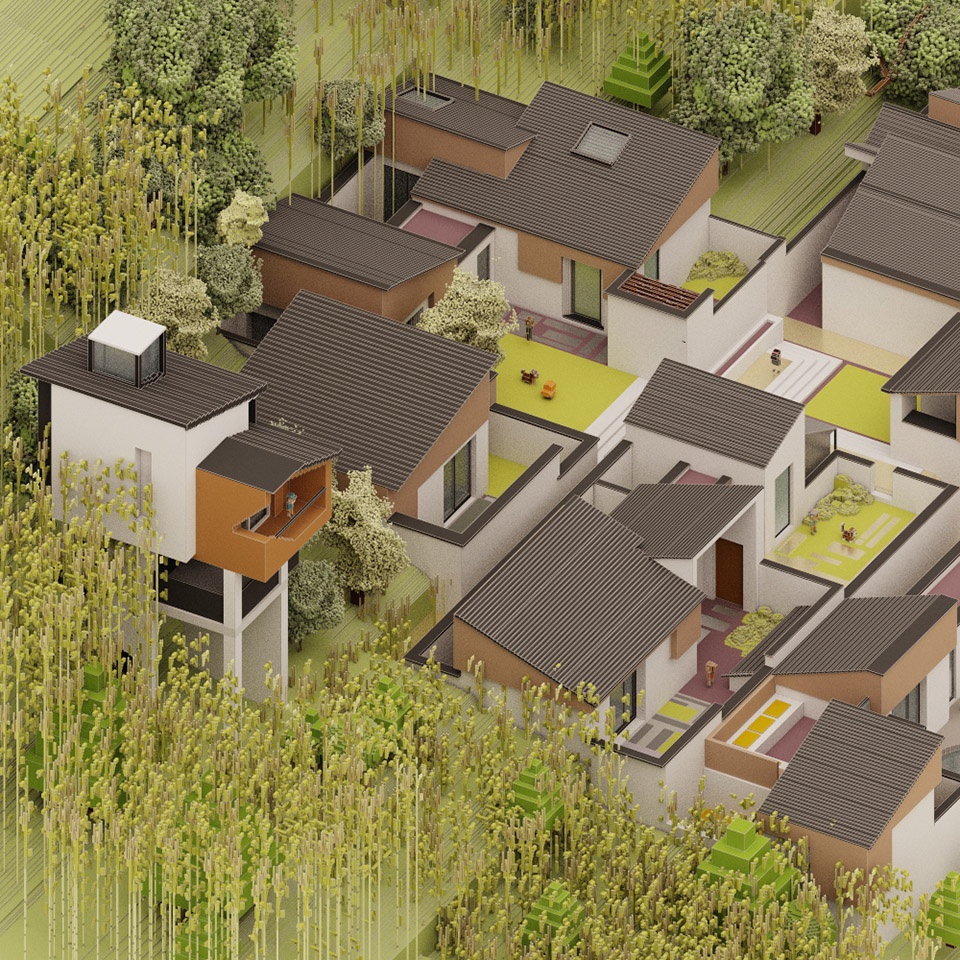 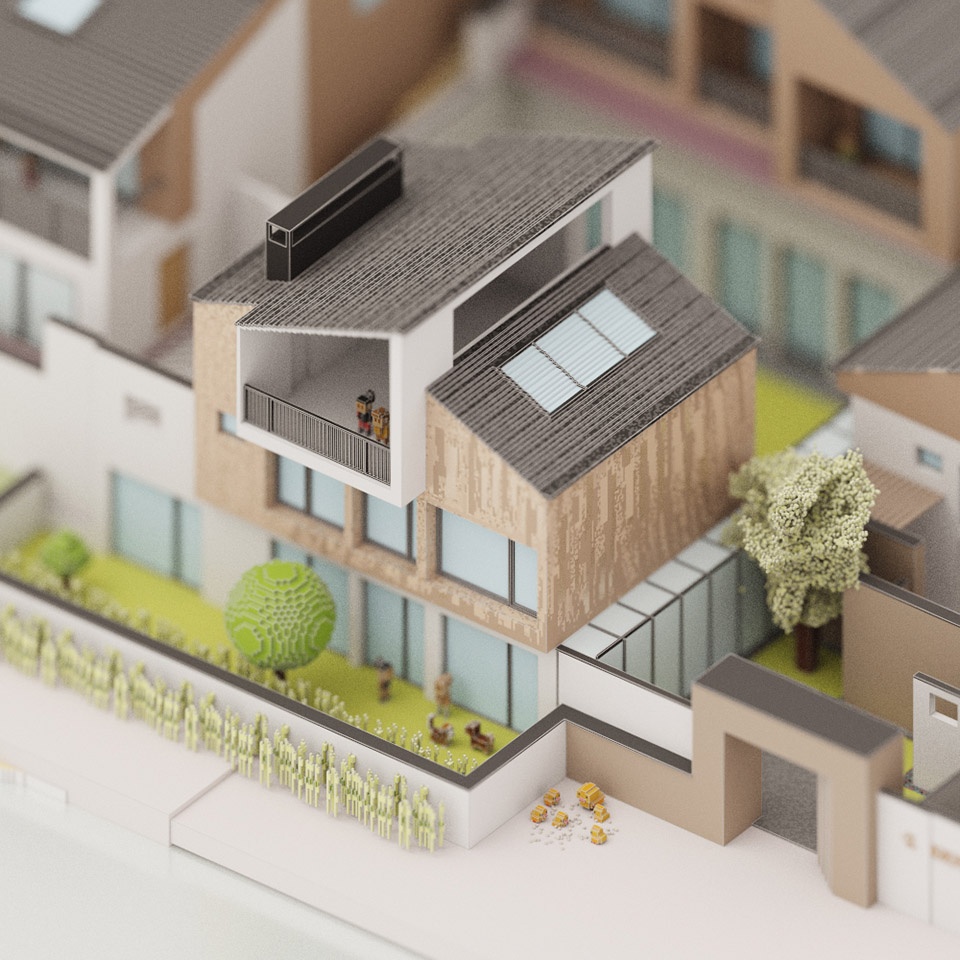 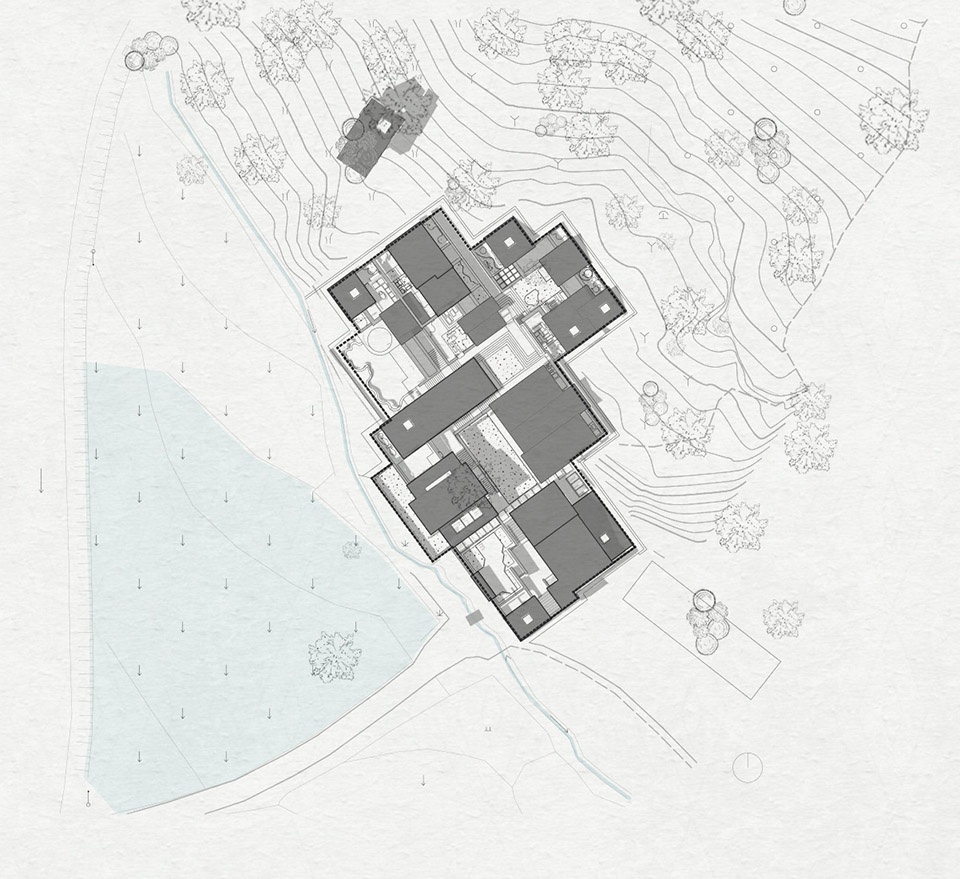 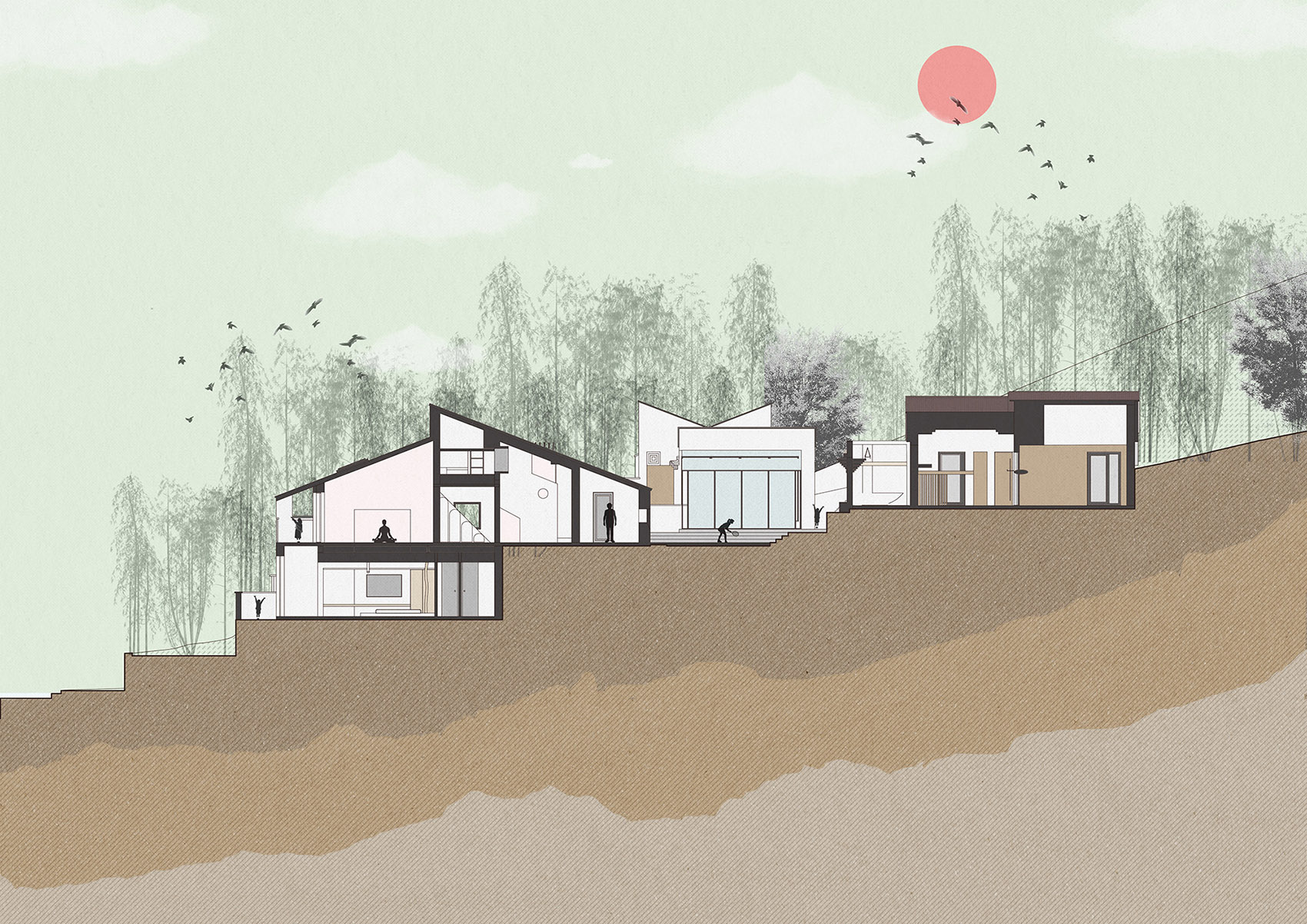 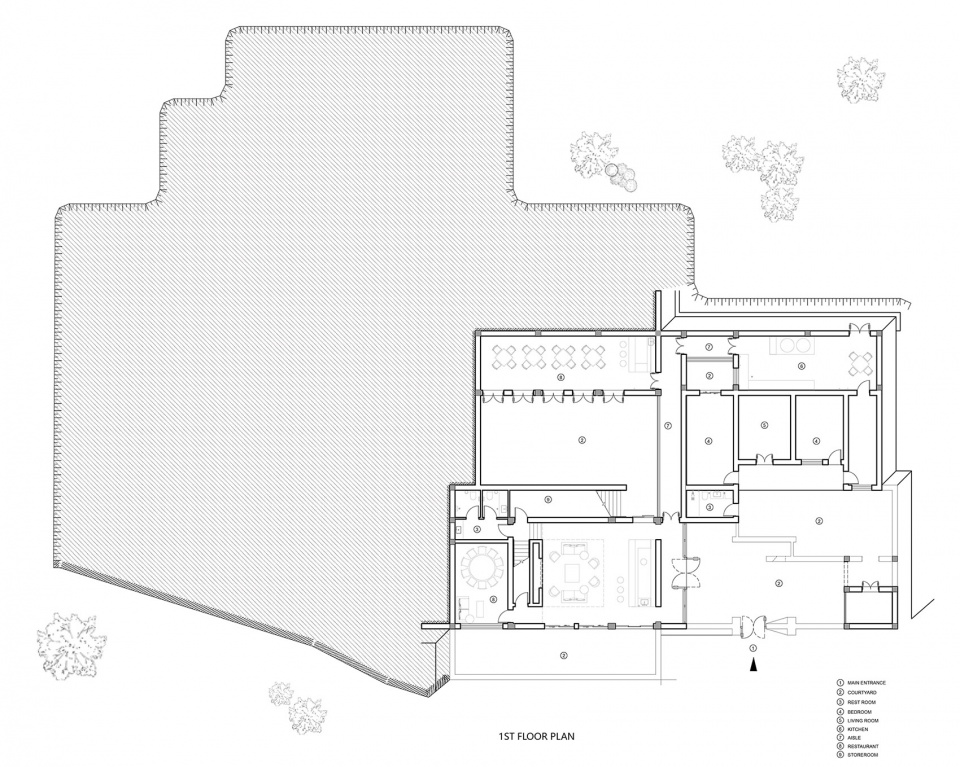 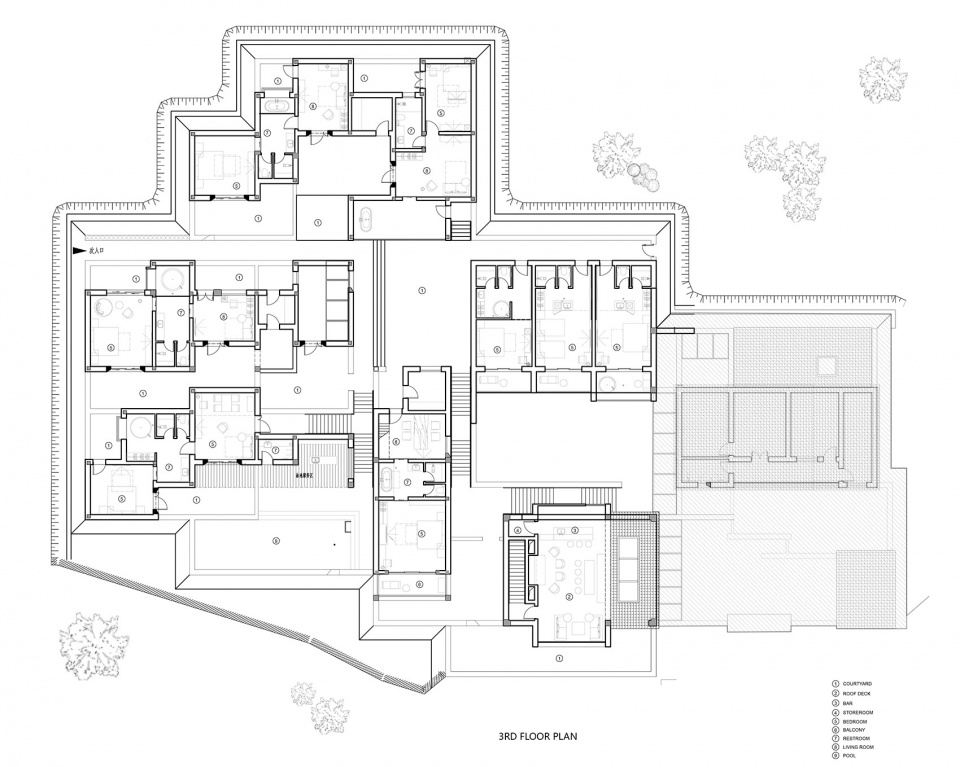