The base locates in the Dingrong Village, which is the the most northern village in Quanzhou and deep in the Daiyun mountains. The village is famous for the ginkgoes, 27 ginkgo trees of 400 or 500 years old intersperse over the village. In the late autumn and the early winter, the golden ginkgo leaves embellish the patches of broad-leaved forest, form a rustic rural feeling together with the ancient folk houses with the characteristics of southern Fujian. Surrounding the village, the bamboo forest groves around the mountains, which seem to be protecting this ancient pure land. The special geographical location and inconvenient traffic preserved the village from being disturbed by outside wolrd for hundreds of years, the original natural features are retained. 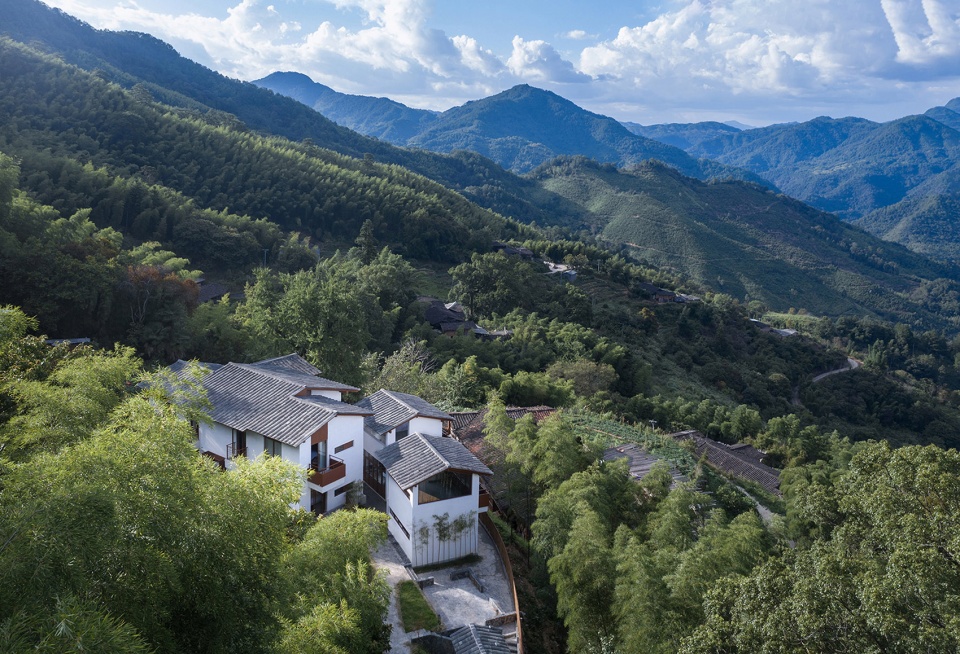 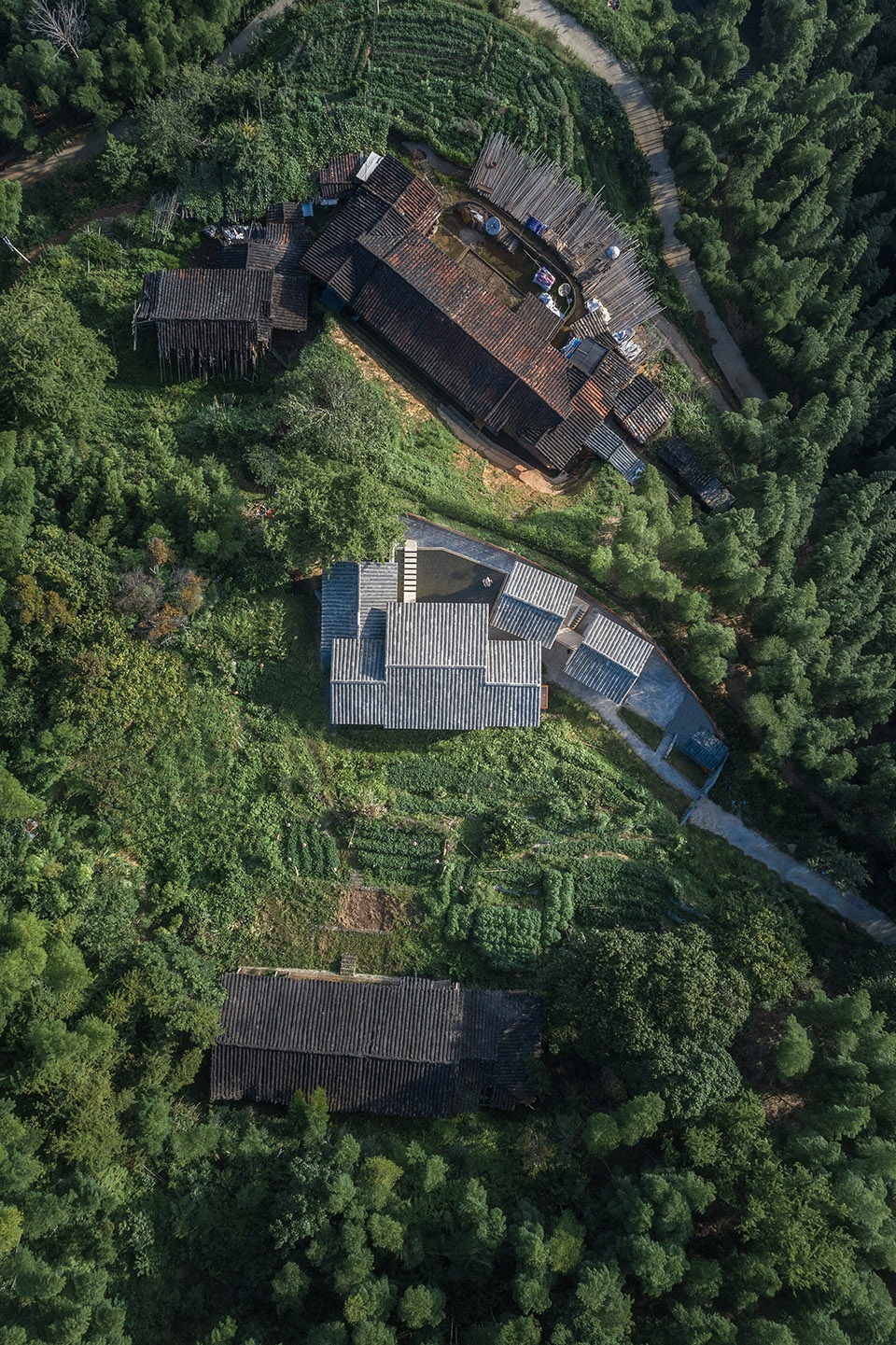 Driving from the urban to the town and then following the narrow village road, we came to the hamlet. We stopped the car under the lush ginkgo trees, that blocked the view. By then it was still in the early summer, the ginkgo season haven’t come yet, we climbed along the steps covered with weeds, and find the construction that we need to transform this time — a old wooden dwelling folk house in the weeds. The old house has the structure of typical characteristics of southern Fujian calls “ Sanhe courtyard ”, and there is a 300 years old ginkgo tree outside the courtyard which seems to be protecting the house. There were some burnt incenses, gold paper and candles in the hall. The owner of the house kept the tradition of southern china, would come back from the city to worship their ancestors in every Chinese New Year and the Qingming Festival, which brings some vigorous atmosphere to the old house. There is a firewood room and a bathroom close to the east of the main chamber, and to the east is a grove of bamboo, under which a path connects the house to the outer village road.

The hall of the main chamber has a tall storey height, while the wing-rooms on both sides are lower. Single rooms and kitchen inside the old house feels gloomy, even though they are with doors and windows, while the rest of the halls and corridors are opened, which are bright and ventilated. The old trees, courtyard, corridors,steps and the mountain in the distance, all these elements constitute every fragments of the old house, walking in these scenes is just like walking in a small village .The design-build method of the old house is a combination of post-and-lintel construction and column and tie construction. The roof truss of the middle hall is the most part that remains intact and exquisite of the house. The structure of the beams and columns are easy ro trace, while the rest parts are obviously dilapidated. 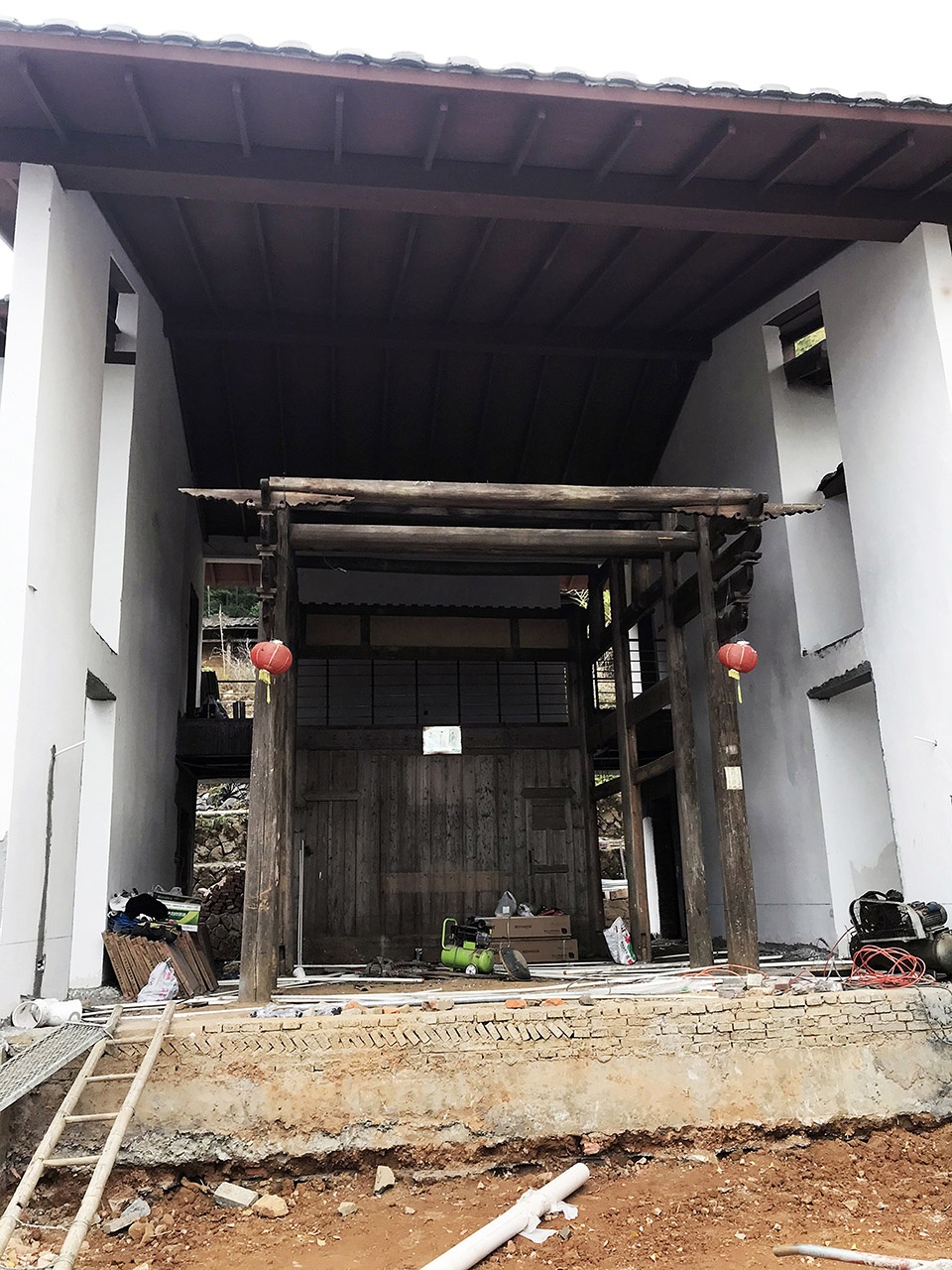 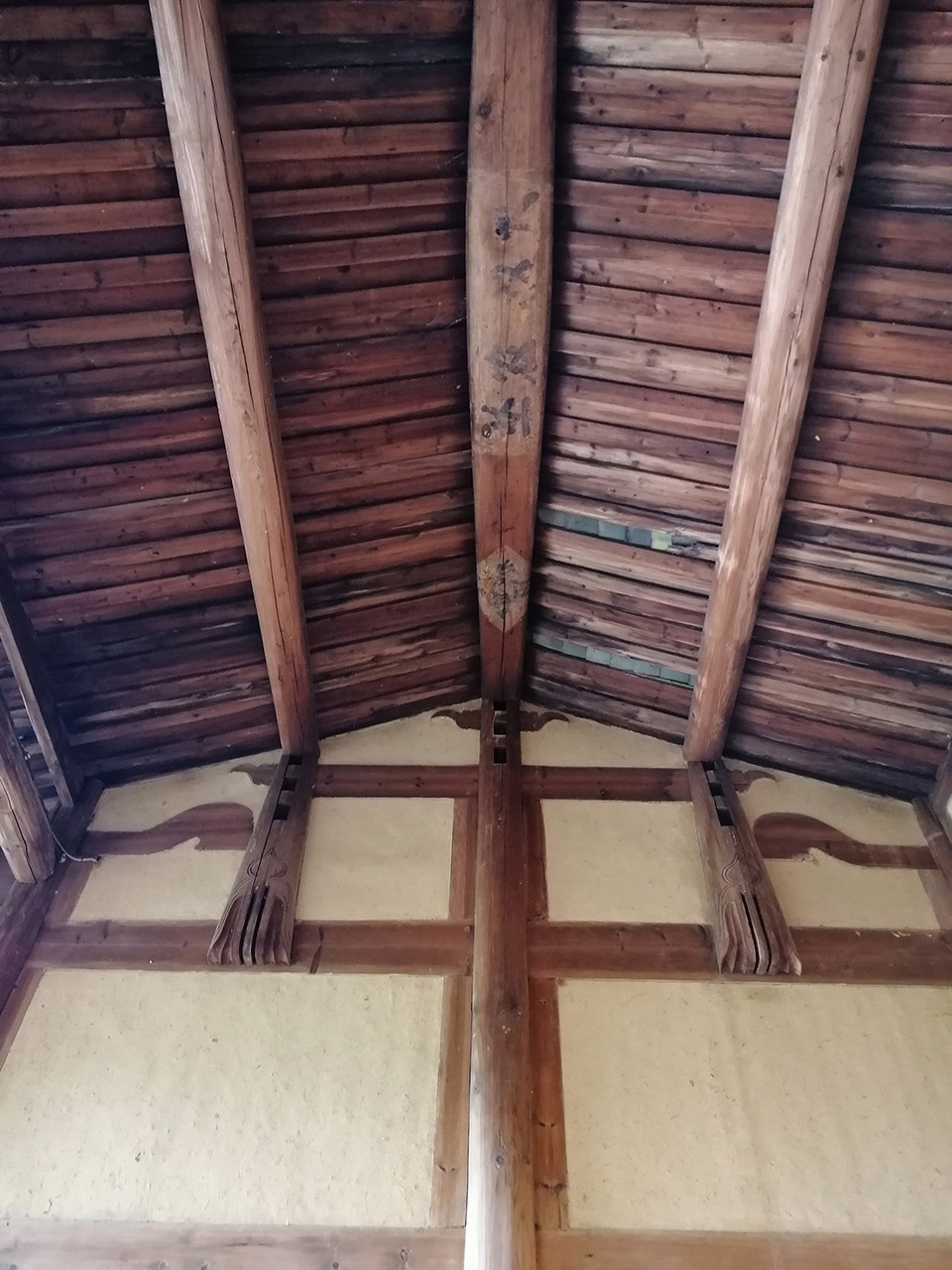 1.By means of the transformation of the first B&B in Ginkgo Village to arouse the vitality of the village, and promote the tourism card of “Ginkgo Village” further in order to let more people pay attention to the old villages and ancient Ginkgo trees. Through these, we hope to boost the rural revitalization.
2.For the owners of the house, this dilapidated old house is the spiritual belonging of their family and he wish to preserve the memory of the “main chamber”.

The village is located on a mountainous terrain, and the local dwellings are built along with such. For hundreds of years, the villagers have chosen the suitable site for construction. The project site faces north,and it is long and narrow from east to west, high in the south and low in the north. The layout of the design follows the texture of the village morphology. The main house and annexes are built along the east-west direction of the land to restore the fragmentary site. The architectural style should be integrated into the village, and the building volume should be able to separate into pieces in order to integrate with the surrounding environment. 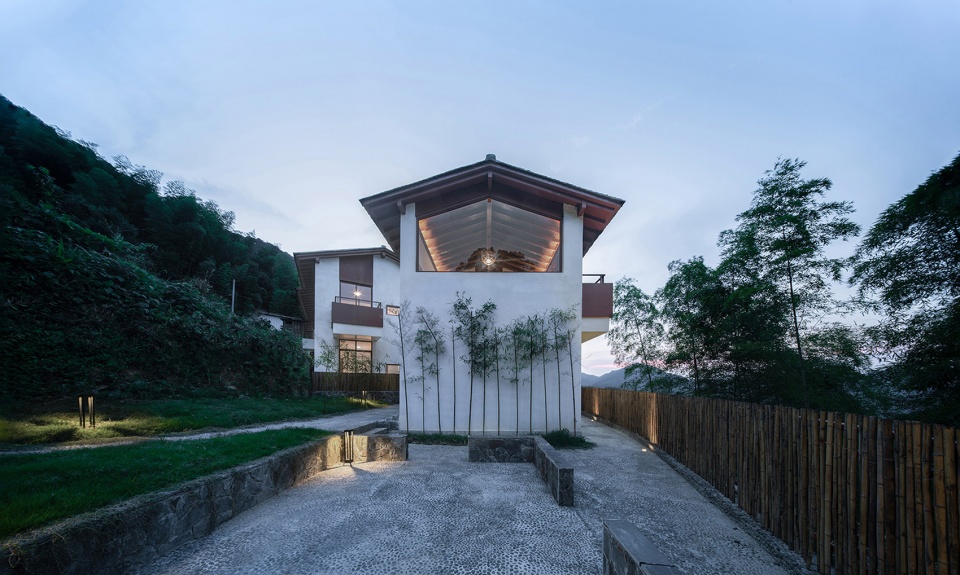 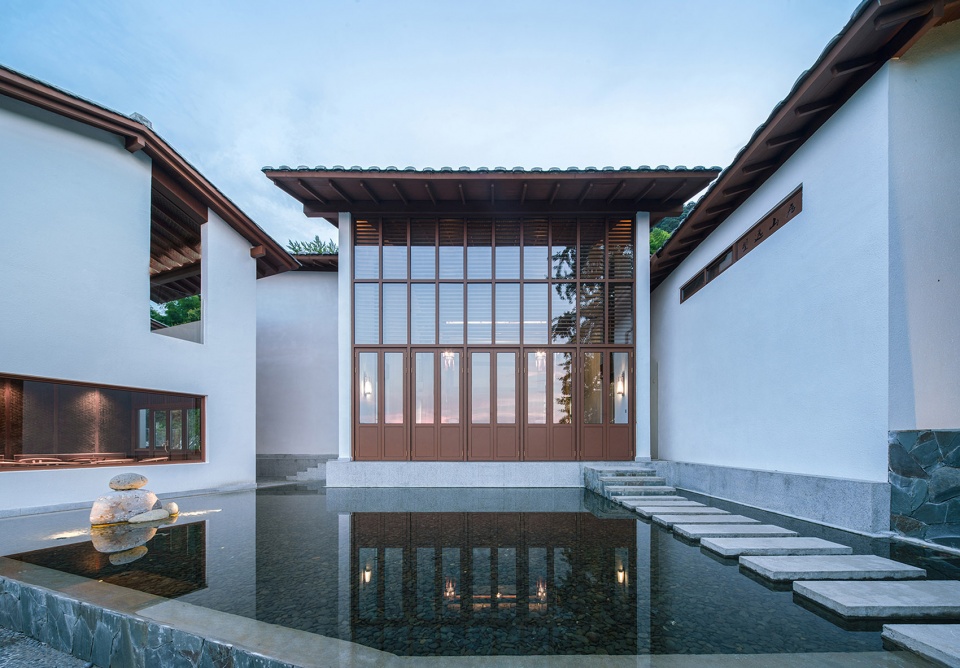 “Ancient trees, mountains and the courtyard” become the key of the design, the usage of internal and external space transformation and penetration to response to the narrowness of land use, five rooms gather in the main chamber, the ways to get to tearoom, restaurant, kitchen or toilet have to get through the outdoor space, this design is the inheriting of old house, would form certain “wandering” alleys, and would produce some “inconveniences” to show the differences of rural area and urban space. Alleys, ancient trees, buildings, water and bamboos can form the multi-direction switch, these would expand the path for experiencing, enlarge the space effect and enrich the place, walking through these spaces, is like wandering in a small village, and would continue the space experience of the old house. 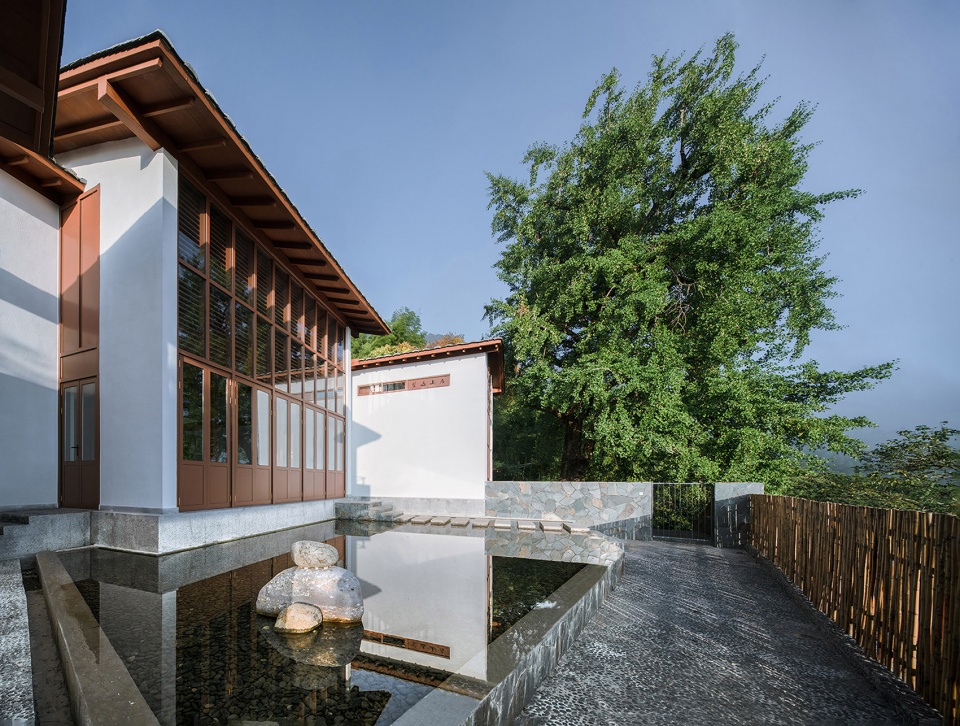 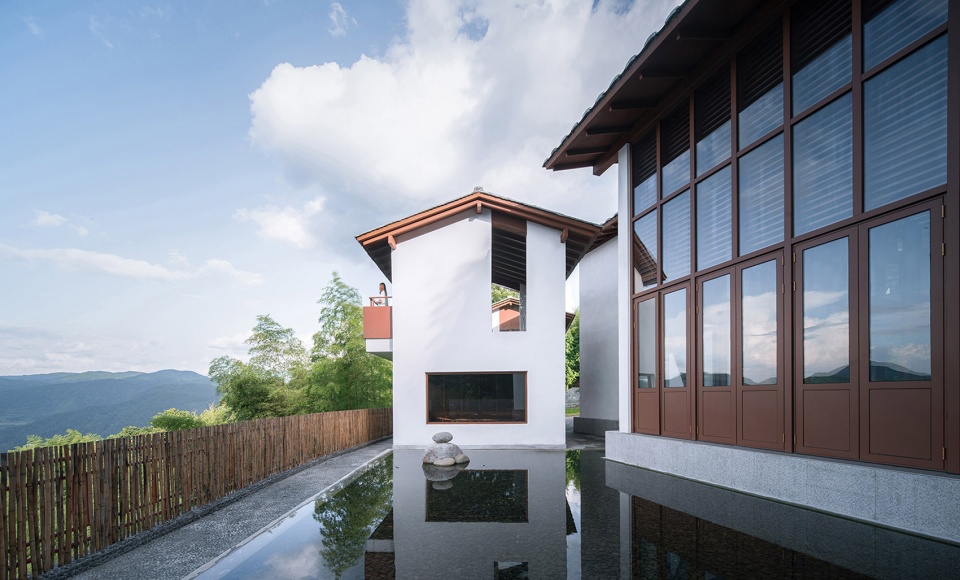 Under the ancient trees, the sound of falling water brings vitality to the whole space. Wandering through the stepping stones on water surface, one can come into the lobby bar. As the central space of the B&B, opening the glazed door facing the distant mountains, the surface of the water reflects the blue sky. The new roof truss, the old roof truss, the water and the distant mountains formed a time traveling picture together. 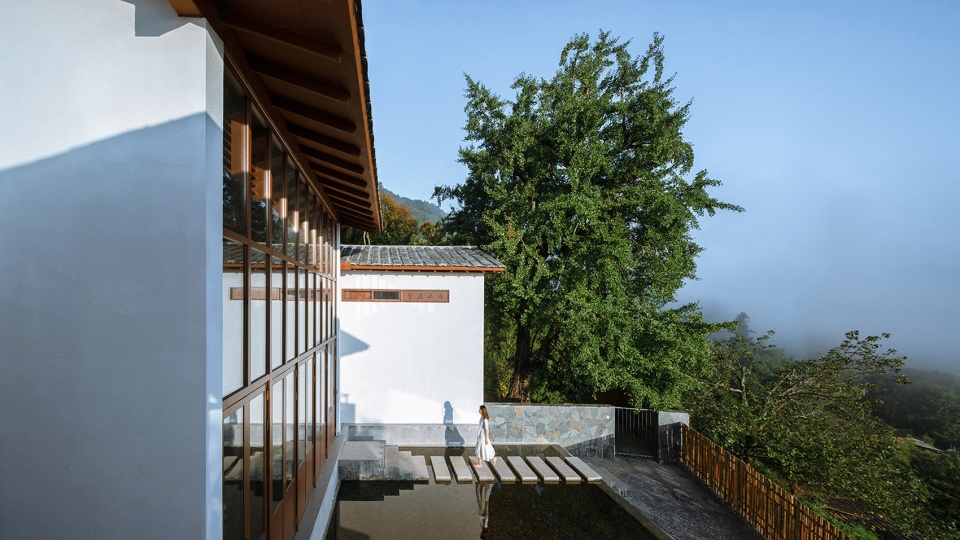 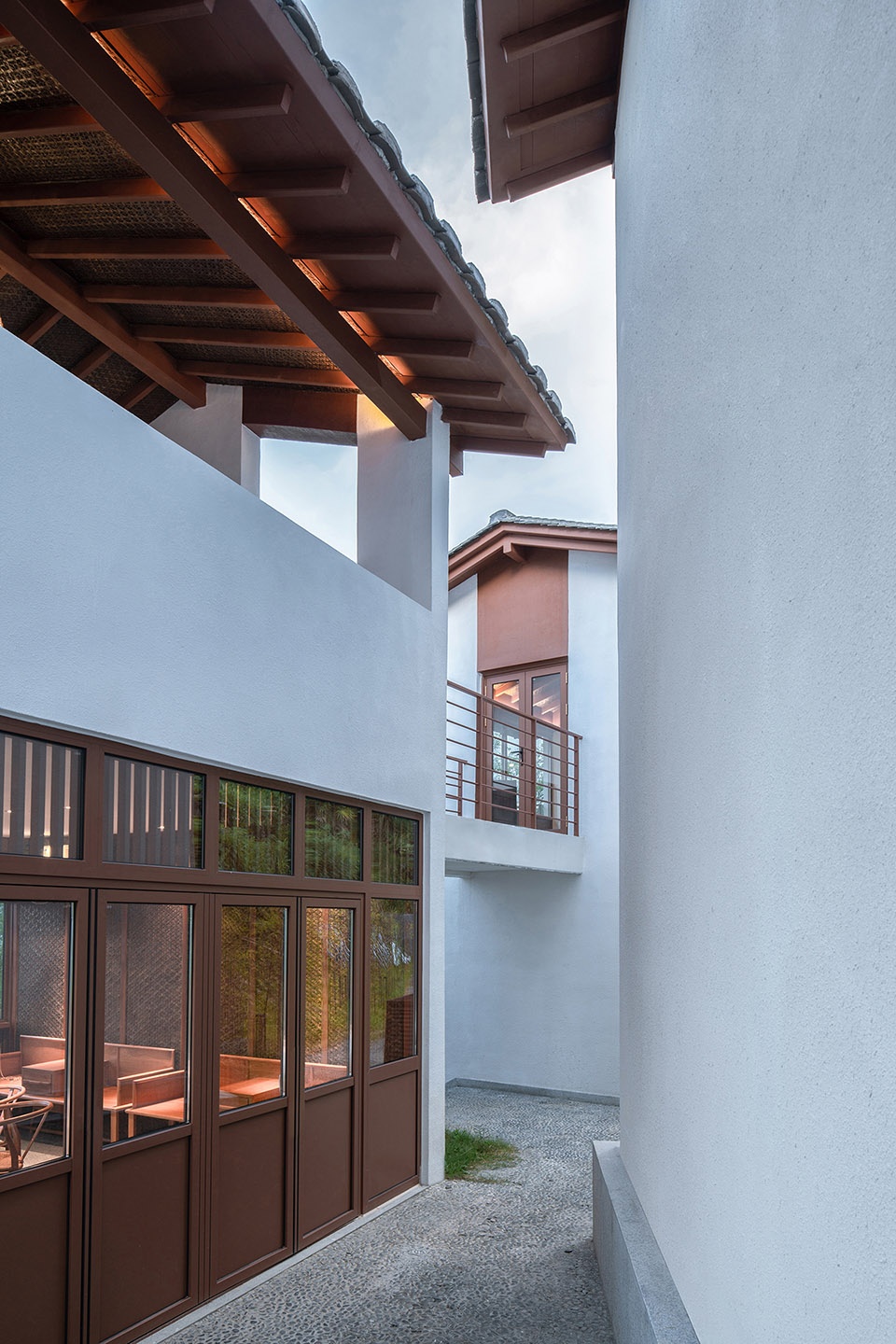 The ancient village is located at a high altitude with inconvenient traffic. therefore the design-build methods are ecological and primitive. Most wall foundation of the dwellings were built with pebbles from the stream down by the mountain, woods were used to construct roof trusses, the walls were put up by bamboo rattan plastered with immature soil, and the roofs were covered with Chinese-style tile. In order to continue the local construction elements, the design uses bamboo balustrades, bamboo woven ceilings, Chinese-style tile roofing, plaster exterior walls and other building materials. The steel structure was used in order to reflect the traditional timberwork. 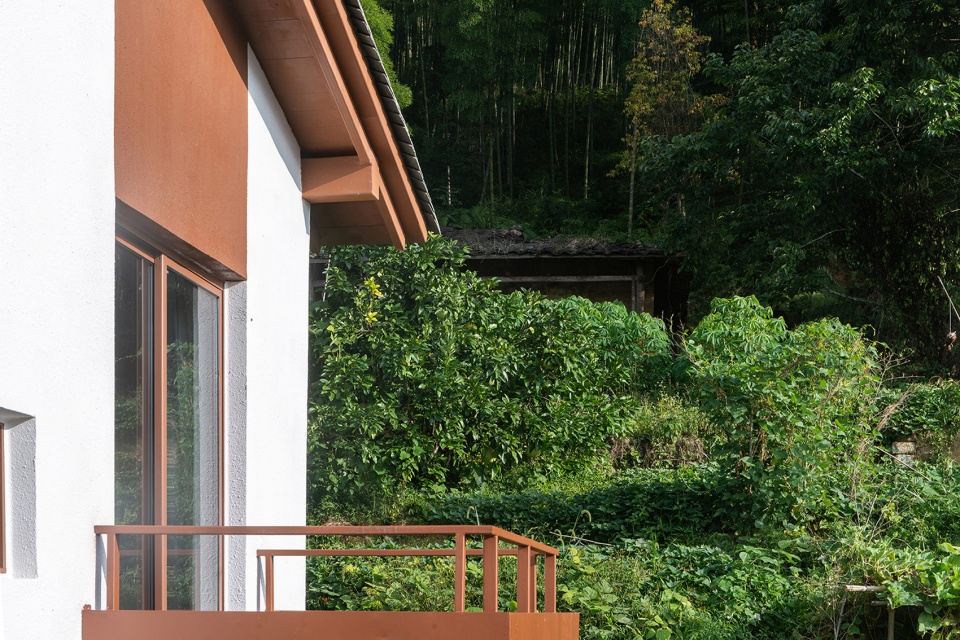 The owner required to continue the memory of the old house, the design puts forward to keep in the hall roof truss in order to form a sense of the speaking between “new” and “old” and thus construct the effect of “room inside the room, house inside the house”, which brought a greater difficulty to the construction. We need the craft to fine process the dilapidated old timber frame in order to keep the traces of history. The old roof truss is needed be protected as an element of interior space in the lobby bar, which would become a narrator of history, also the tie between the present and the past. It is the spiritual space of this project,in the future, this location could also be used as a village hall and the countryside museum. 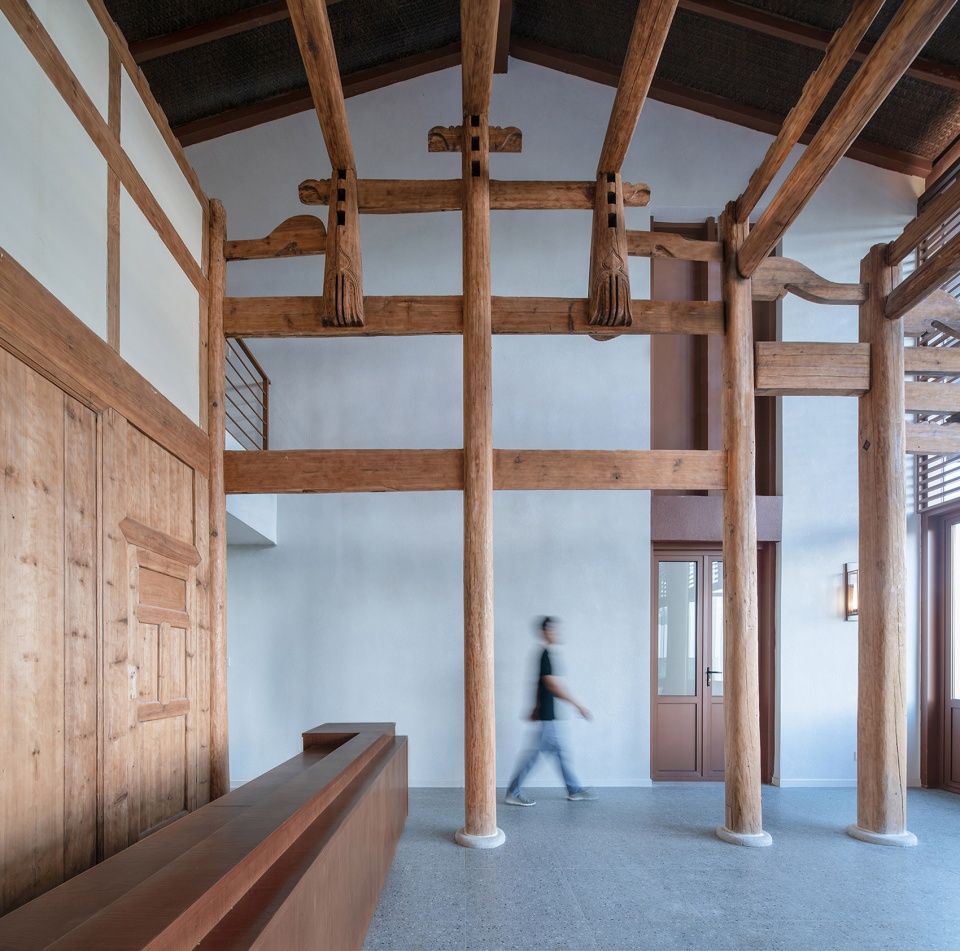 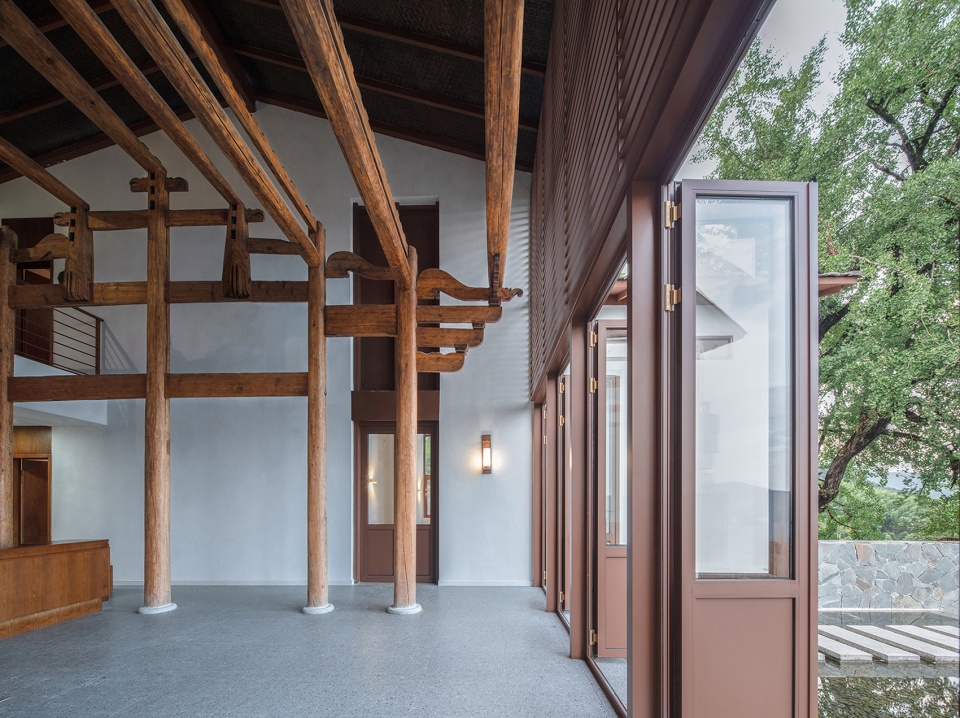 ▼大堂看向室外廊巷，木构架加强视线通廊，looking at the corridor from the lobby, timber frame improve the visual corridor  ©赵奕龙 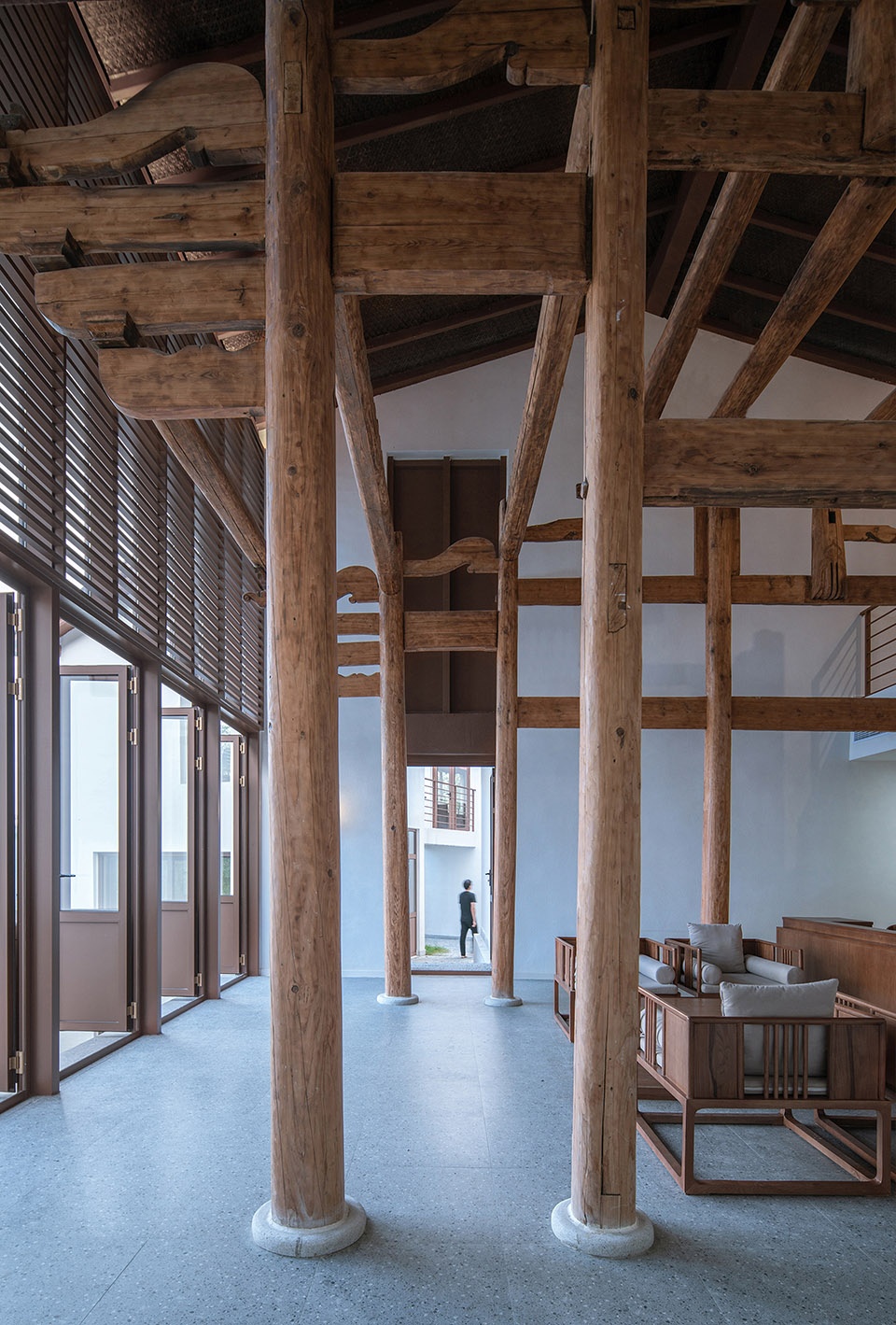 Limited by the budget, the process of construction faced large number of difficulties, mobile machineries shops can not be driven into the lane in the back of the house, we widen the road to satisfy the need of construction, so the construction measures expense is over budget, which also affects the construction fund. At the same time, because of the other factors, the plan of building a kitchen and a bathroom as new single buildings has to be canceled and changes to transform the original toilet, the location of kitchen in the original design is changed to be the outdoor dining area, the firewood room transformed into a dining room. 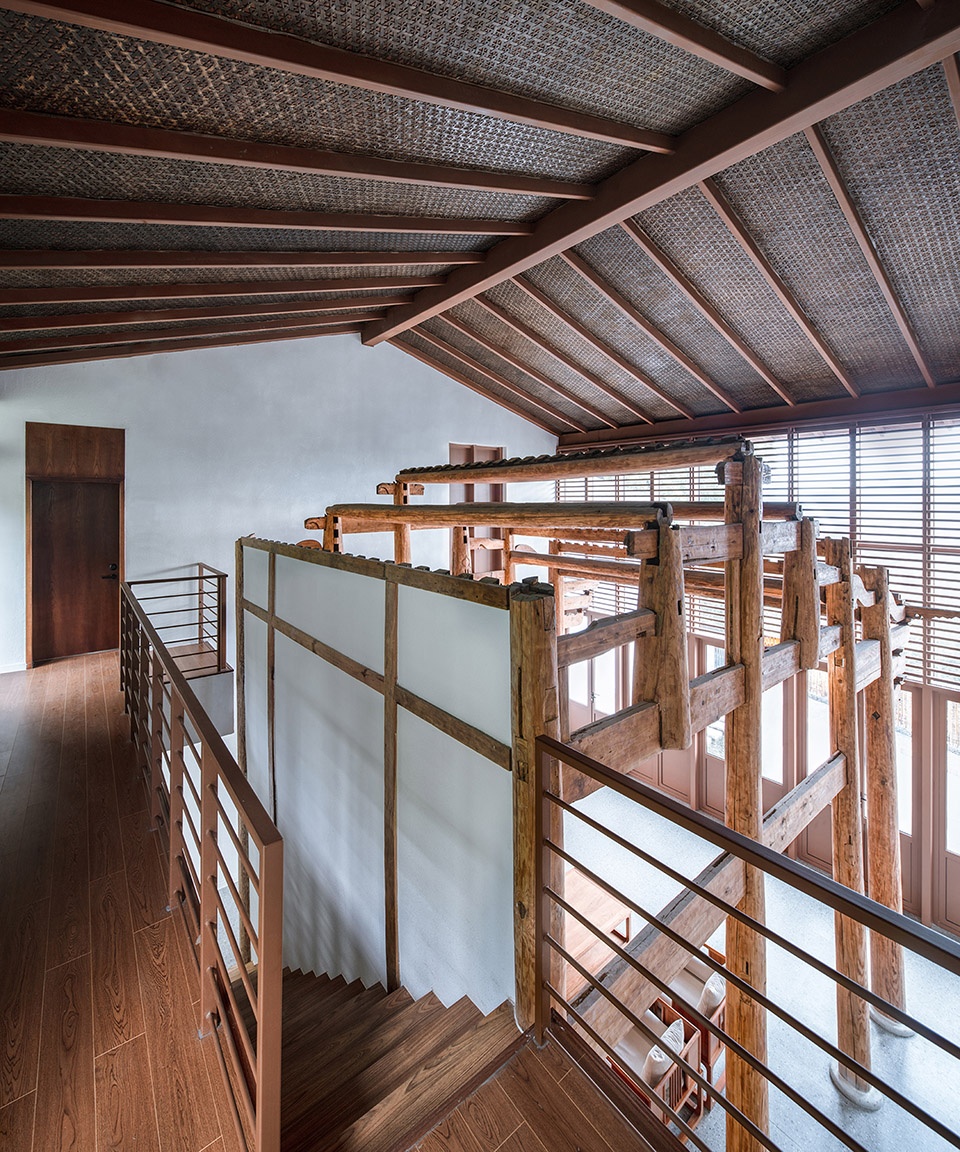 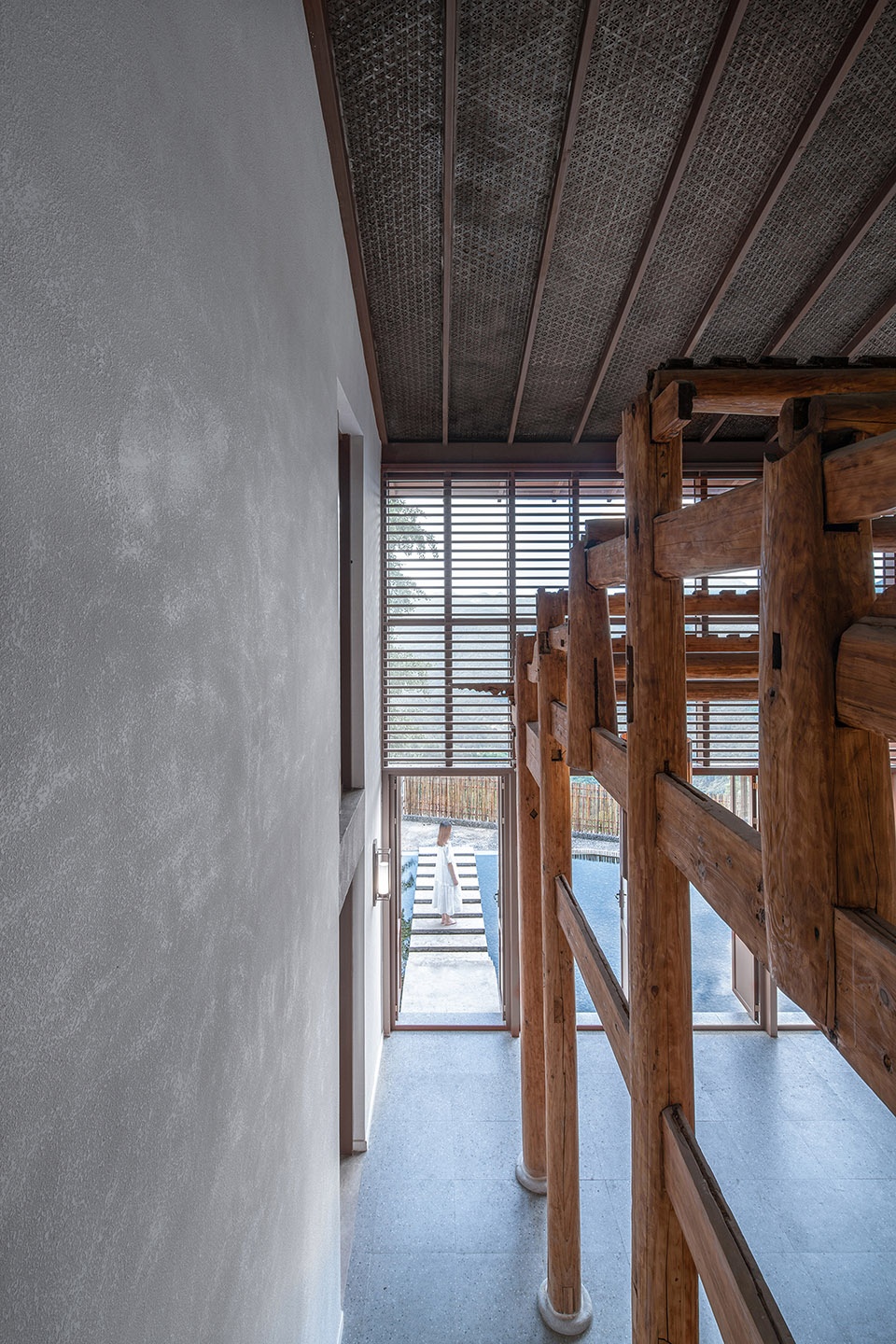 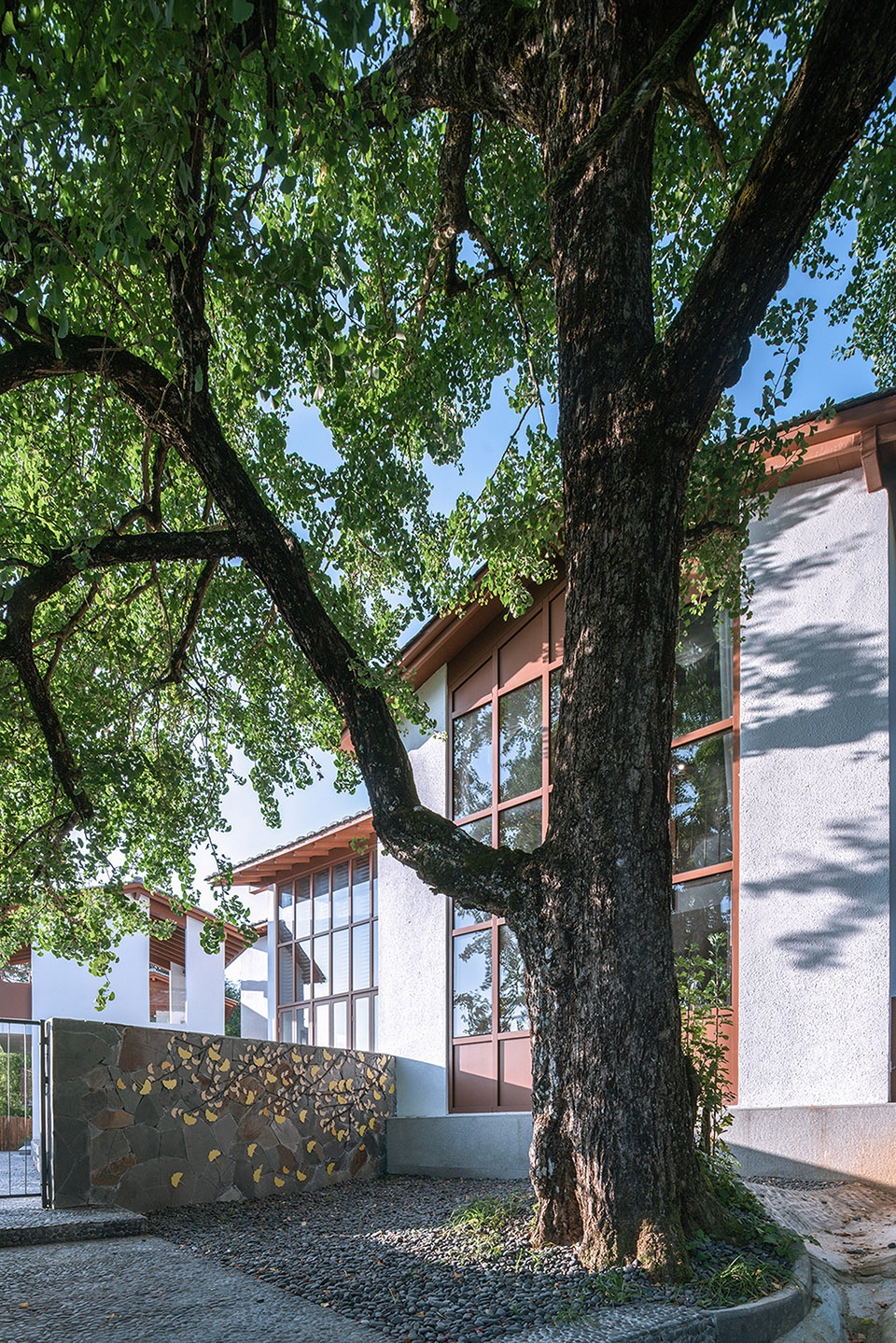 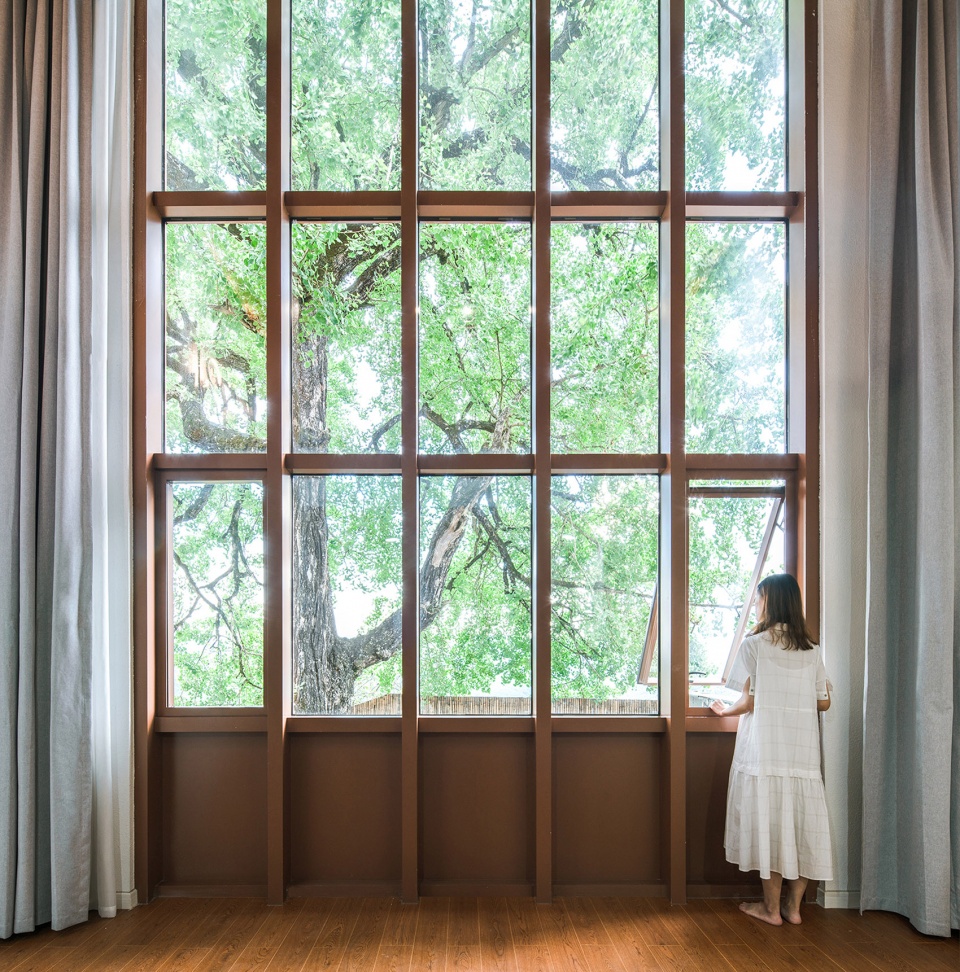 The viewing angle of the mountain in the distant: Due to the site condition and the orientation, the tearoom was turned to the east by an angle, therefore, a wide transverse view of the distant mountains could be guaranteed for the main chamber. The observatory also keeps a safe distance from the north retaining wall of the site, it also keep paralleled to the distant mountains. 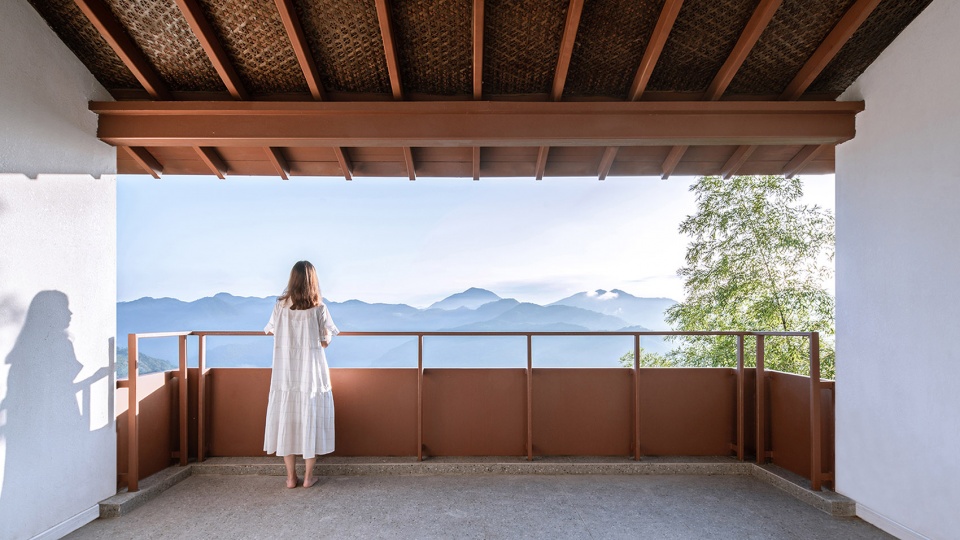 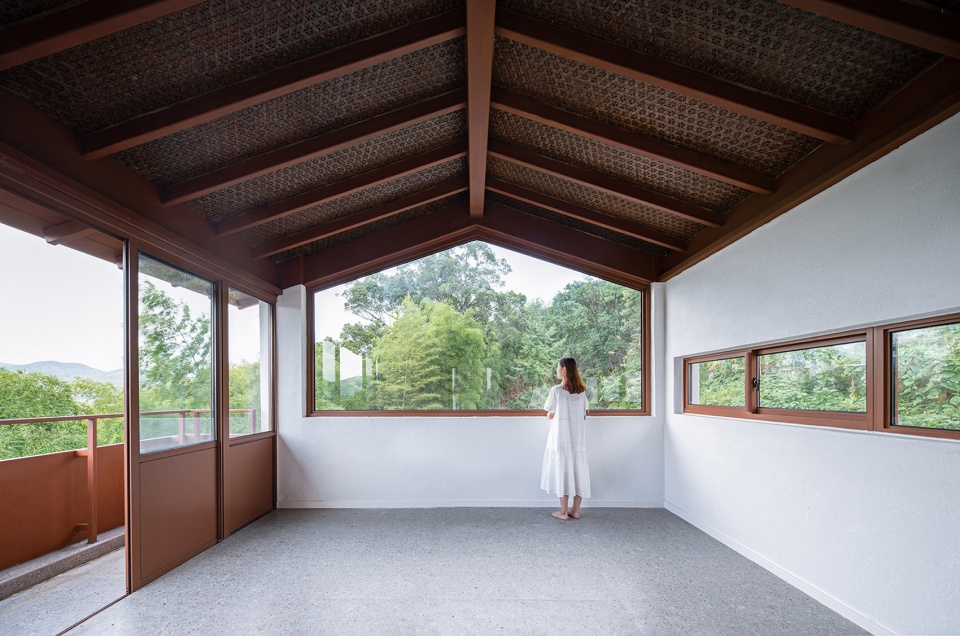 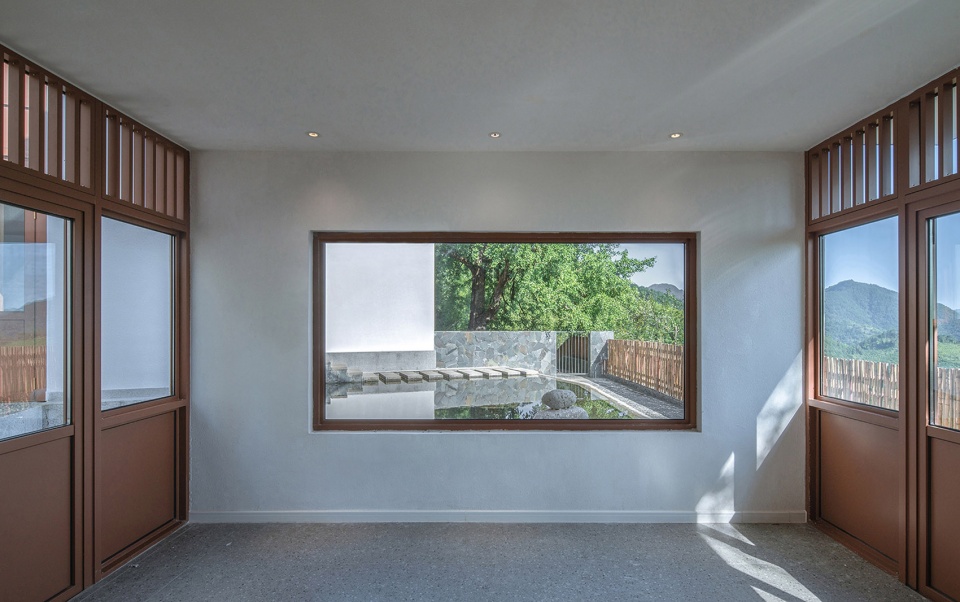 The largest guest room has a loft layer, and the elevated space faces the ancient tree, this would form a sense of conversation between human beings and the ancient trees, as well as the interior and exterior spaces. The balcony of the west guest room on the second floor is adjacent to the farmland path of the terrace, forming a “handshake balcony”, on which the users can actually shake hands with the old farmers passing by. The east rooms face the bamboo forest, bamboos are luxuriant and will not block the view, every time when the wind comes through, bamboo leaves would swish. 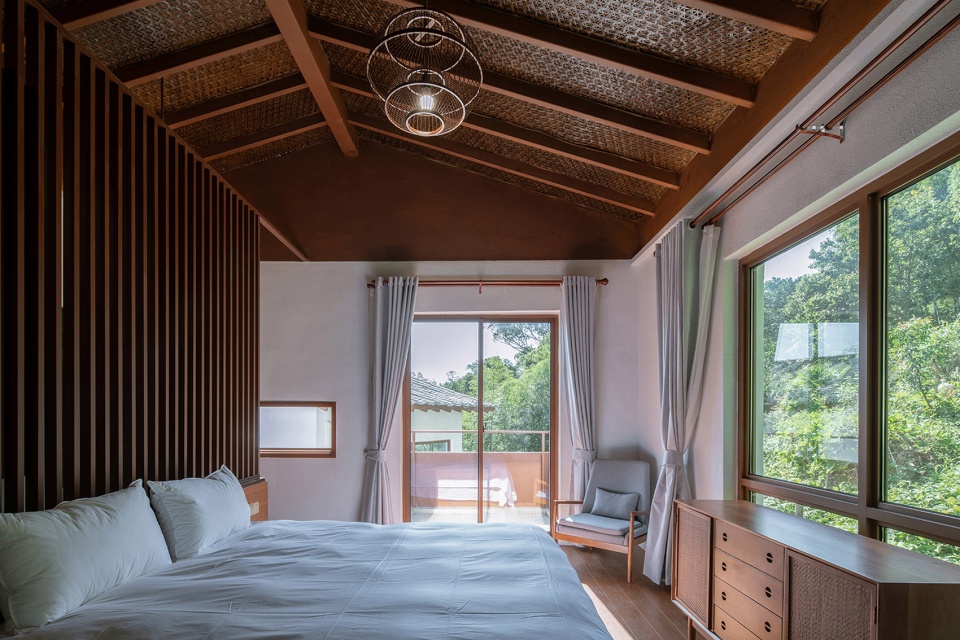 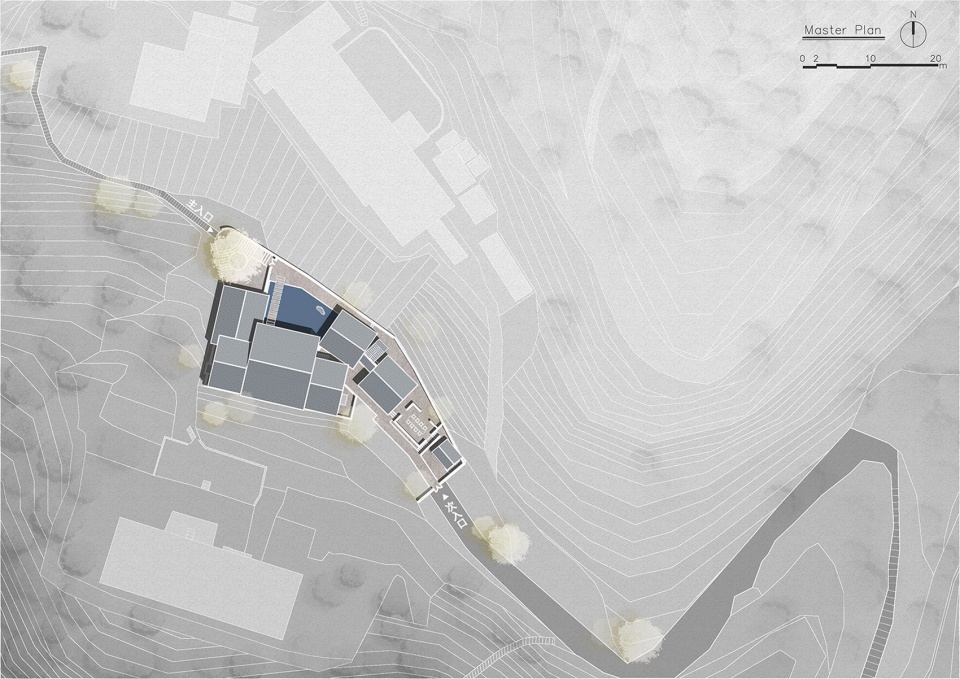 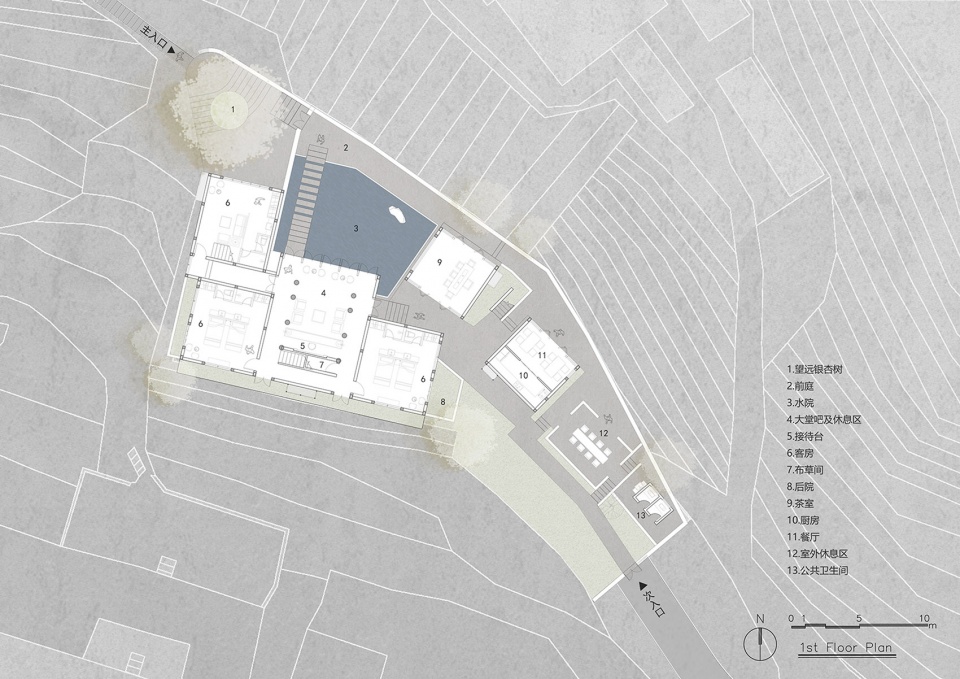 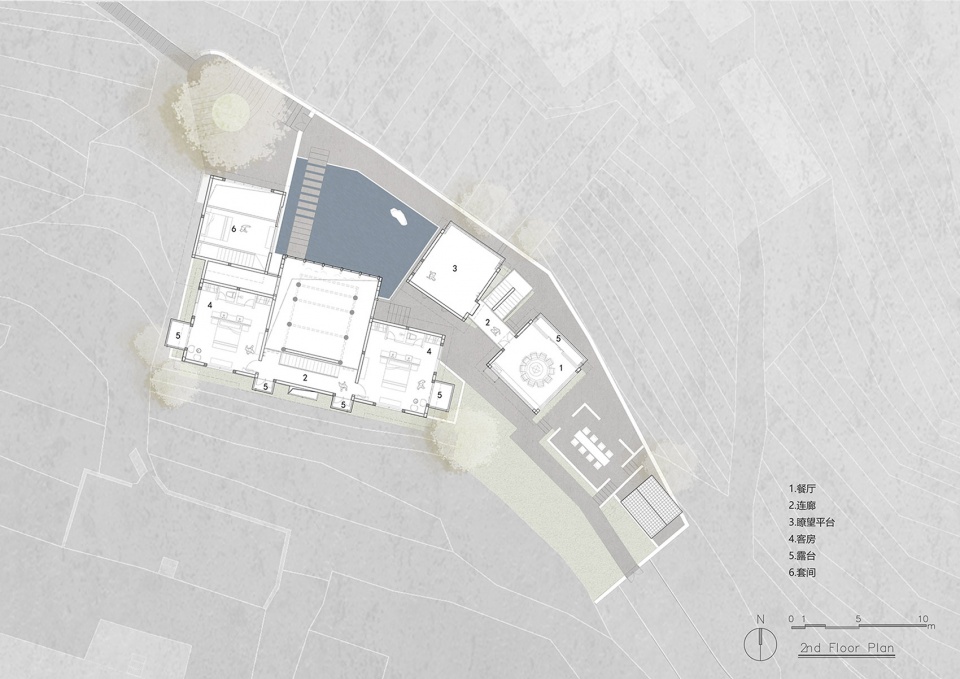 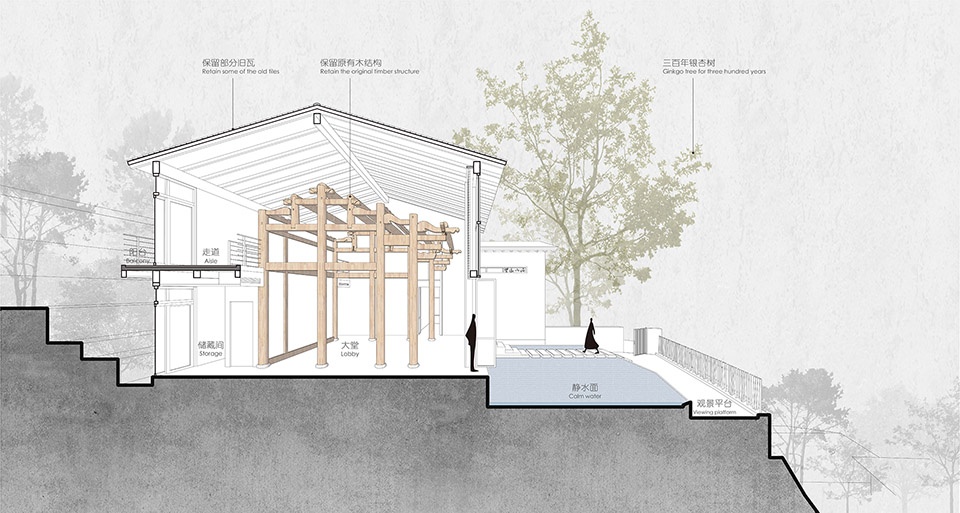