Time has no beginning and no ending so does space , there is no end inward and no boundary outward. How can we place ourselves in this world? Why not break the boundaries and put yourself gently between heaven and earth to appreciate the changes of nature in four seasons of the year and four seasons of the day?

Boundless theater is an art space created in a natural place in a transparent architectural form and an open attitude through local construction based on the thinking of endless time and endless space.

Egret Bay art museum is located in Rizhao, Shandong Province. It is located at the east foot of Wulian mountain, a famous Buddhist mountain. Mr. Su Dongpo visited the mountain many times during the reign of the governor of Mizhou, and left a good sentence of “its beauty does not reduce the wild geese”. The construction concept of the town is to “reshape the relationship between man and nature”. On a land area of 10000 mu, it combines the aesthetic space with natural landscape and various business forms. After more than ten years of construction, it seems to be an ideal place for people to live.

There is a primitive small valley in the town, which is a natural valley from the remaining vein of Wulian mountain to Chaobai River. A stream flows slowly, which is very much like the artistic conception in Tao Yuanming’s peach blossom source. A large number of cherry trees have been planted in the valley. During the spring flower season, it will brighten the whole valley and the hearts of residents and tourists. 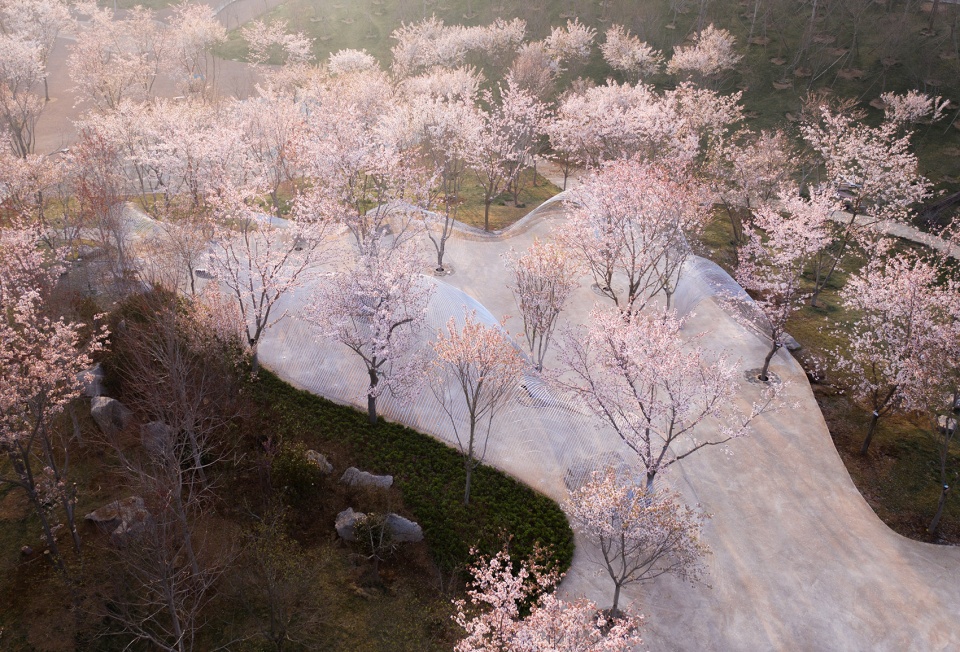 In the early spring of this year, Mr. Xu qunde, the founder of egret Bay, went on an outing with me. I talked to him about a building I had built before. There was a process photo. In the picture, there was a woven curved steel mesh floating lightly in the woods hidden by mist. Seeing this picture, Mr. Xu immediately said that there was a place in egret bay where one could be woven, which was located in the cherry blossom Valley mentioned above.

Mr. Xu wants to build a building in the center of Cherry Valley as a place for music, dance, drama and other artistic activities. He described to me that his ideal state is “nature is the best”, the cherry tree is the main body, and the architecture is hidden in it. The two form a perfect relationship. As I understand it, this building is like a small thatched canopy hidden in deep mountains and lakes in Chinese landscape painting, facing the landscape with an elegant attitude, and taking nature as the soul. 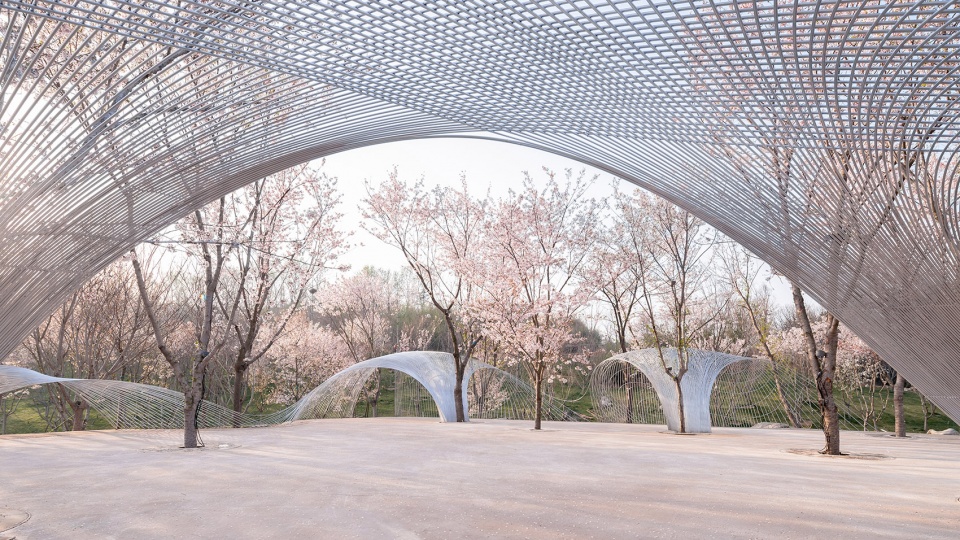 We also agreed that the steel mesh in the picture should evolve into a permanent building. People can not only swim, but also watch the blooming cherry blossoms through the mesh gap. However, everything is vague and unknown. What kind of architecture will be produced in a randomly planted cherry forest?

Like throwing a cloth bag, I threw myself under the cherry trees. There were no design drawings, and it was only a month before the cherry blossoms opened. Mr. Xu and I have been good friends for many years. He said that as long as you are on the scene in person, you will naturally be full of expectations. In this way, with the unlimited trust of your friends, you started working. 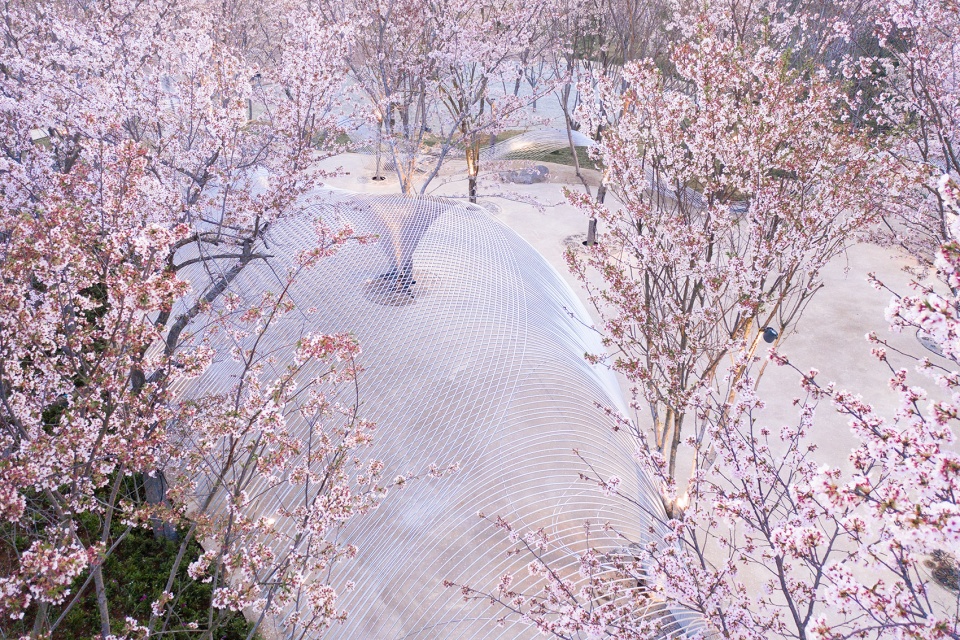 In my imagination, the theater should be a streamline body, a surrounding space, in which people can shuttle freely. I imagine that when cherry blossoms are blooming all over the sky, heaven and earth, cherry trees, the theater will accommodate me, cherry trees are the main, the theater is the second, and I am the free element in this scene. For example, in the picture of residence in Fuchun mountain, the mountains and forests are extended, the residence is secluded, and the little characters are free spots. This is my favorite poetic picture.

I think of the artist’s working mode. I have zero distance and full-time work with my works, but this is a challenge, which means that I have to cooperate with the craftsman in the whole process in this venue regardless of wind and rain. The craftsman and I took the steel bars as pencil lines and the three-dimensional space dominated by the woods as drawing paper. The hard and unmanageable steel bars swam in the air and turned into soft curves, and began to shape the original shape according to the semicircle track. 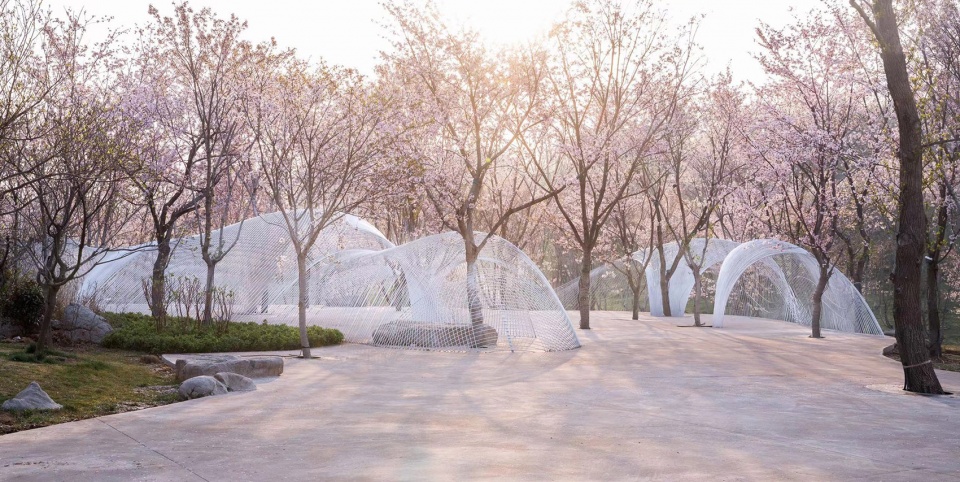 On the west side of the stage, there is a huge stone, which looks like a huge stone bed. At one end of the stone, there is a large cherry tree, which stretches like the Feng Shui tree at the head of each village in the old days. Often, the wife is waiting for the husband who works in the field, and the mother is waiting for the return of the wanderer. In the wind of summer night, it is a pleasant place for the elderly and children in the village. This picture has not been seen for a long time today. I compare this tree to the Feng Shui tree at the head of the village, weaving a circular shed space. The round diameter of the ground is based on the boulder, and the height of the top is limited to the cherry branch. After completion, a pink cherry falls to the dome, leaving a hole in the direction facing the southern mountain forest for you to come. 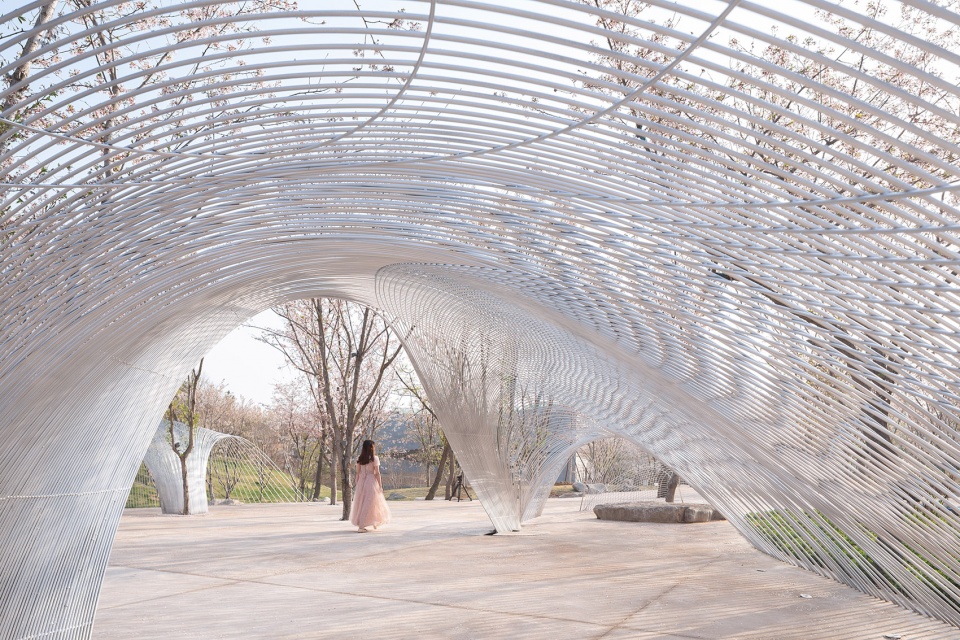 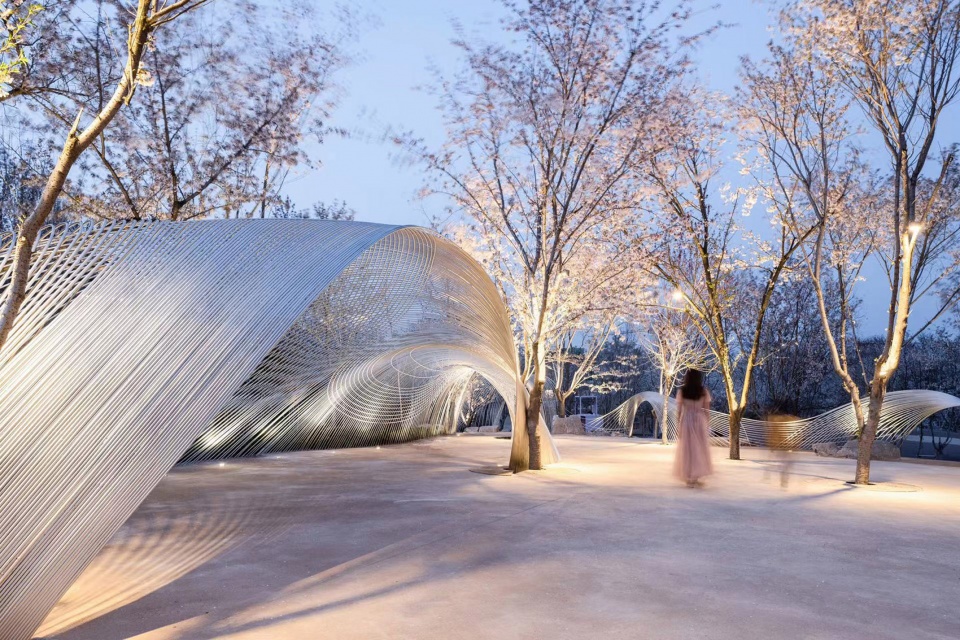 The eastern part of the stage connects the entrance in the other direction and evolves into a changing corridor between four cherry trees. There are two main cherry trees opposite the main stage. Taking the tree as the axis, they form two fans, which are very similar to the wings of birds. The west of the site is the main entrance. As a corresponding, a semicircular dome was carefully woven in the east of the site. After five days, three workers demolished it three times and finally completed it. The dome is independent and beautiful. However, looking at the whole site, it seems too crowded, so Luo Dan cut his hand and reluctantly demolished it.

After the demolition, it was decided to make a streamline and decent to connect the north main stage and the south wing stage. It should be a standing curved wall, but the structure is very difficult, because from the beginning, it was decided that all the steel bars are curved, and one end grows from the ground and the other end enters the ground. It can not rely on the vertical support, so there is no straight line in the whole building. Therefore, a steel bar is twisted in the opposite direction on both sides to make it stand up. The curved wall is low and the connecting surface is long, so two different shapes are adopted. The coordination of structure and form is quite brain burning. 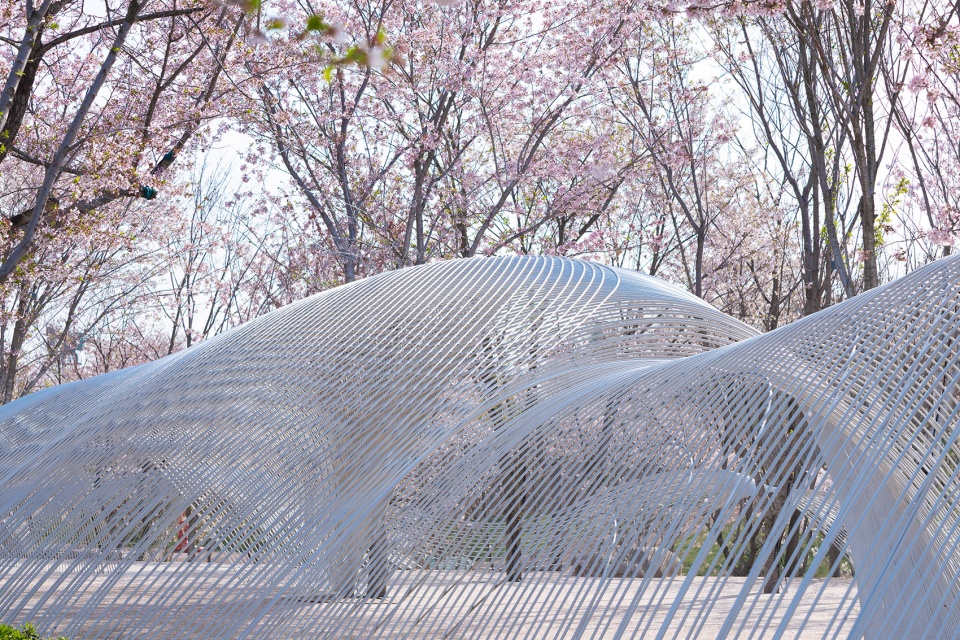 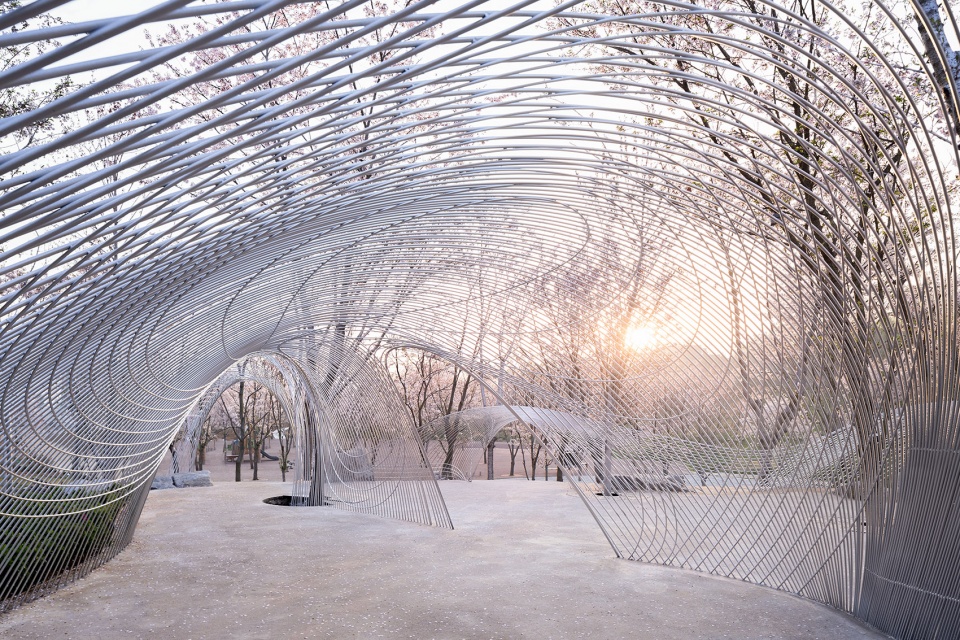 Using steel bars as the only material and weaving them into buildings by hand in three-dimensional space has high technical difficulty. The method I adopt is to make the warp first, that is, the upper and lower lines, the spacing or equal distribution of the warp, or close arrangement or gradual change, and then make the weft after the warp is completed. The weft is better to be less. It should play a role in tying the stability of the structure, or interweave with the warp into a diamond pattern, or a free and soothing wavy line. The shaping of shape and the organization of lines should first follow the stability of structure, followed by the characteristics of steel bars. All steel bars are bent manually by craftsmen without any mechanical bending. Thirdly, follow the guidance and overall planning of beauty, and try to make the trend of each line beautiful and the shape woven is also beautiful. 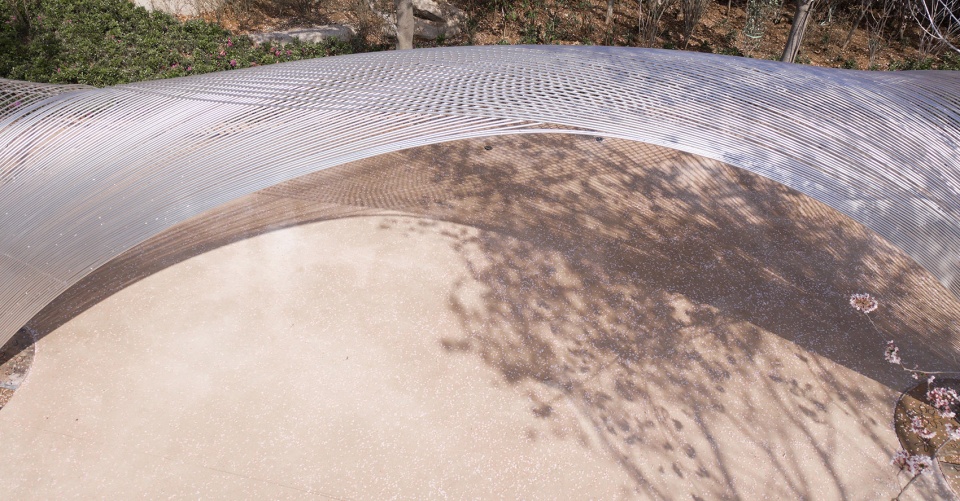 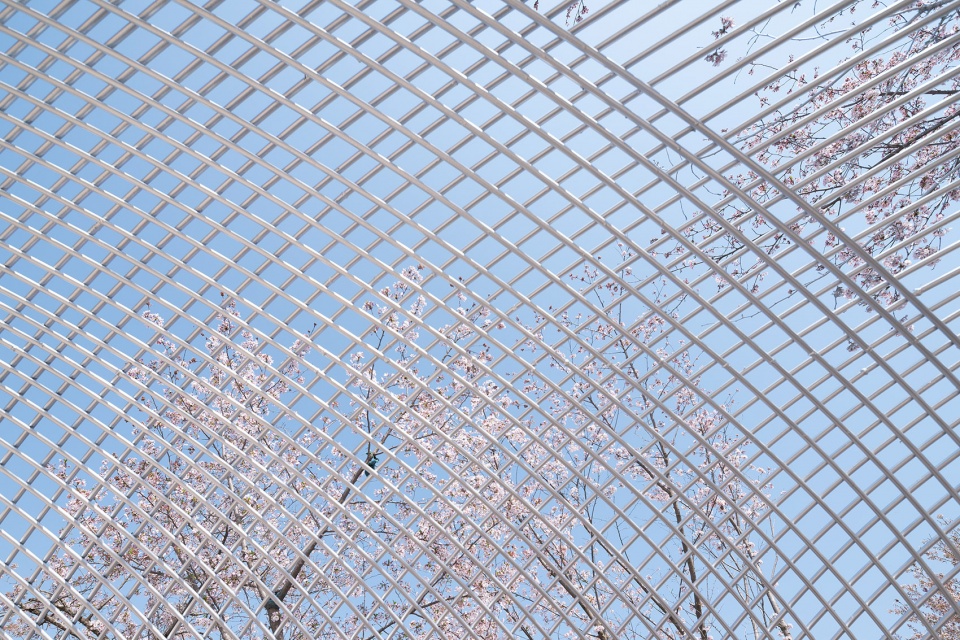 As for the theater itself, we hope to break the tradition. First, we eliminate the limitation of the boundary of the traditional theater. Second, we break the limitation of the auditorium and the stage. All performances that can move freely can be used interactively. Thirdly, in the non-specific performance, the theater presents a completely open attitude. It is a stage for all people and all natural things. On the first day of the completion of the theater, a cherry blossom rain became the earliest dancer of the theater, giving the theater a romantic color. Next, the cats in the countryside, walking residents, professional dancers and tourists appeared in turn. 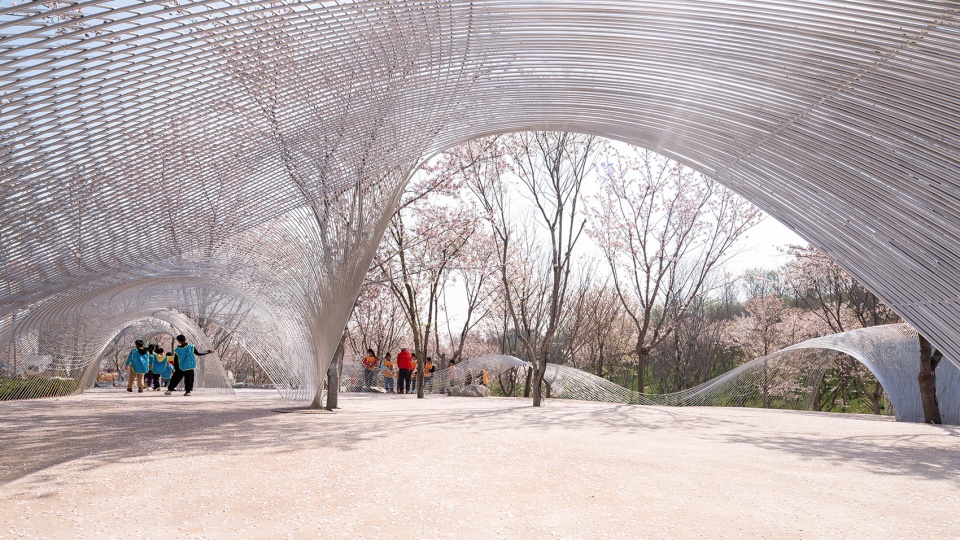 The theater tries to make people return to the old harmonious and warm neighborhood relationship. Once upon a time, as described in the story of the source of peach blossoms, children and old people were free and happy. The location of the theater is also a neighborhood space in the Egretwan community. Contemporary Chinese people live in a fast pace and are used to building their own life dreams in a crowded city. When we return to the community, we walk with our neighbors, We have lost the leisurely pastoral life in the period of agricultural culture, and people are in a feeling of longing for and fear of communication. The theater tries to narrow the distance between people through its hazy poetic state and create a fun and relaxed way of meeting and communication. 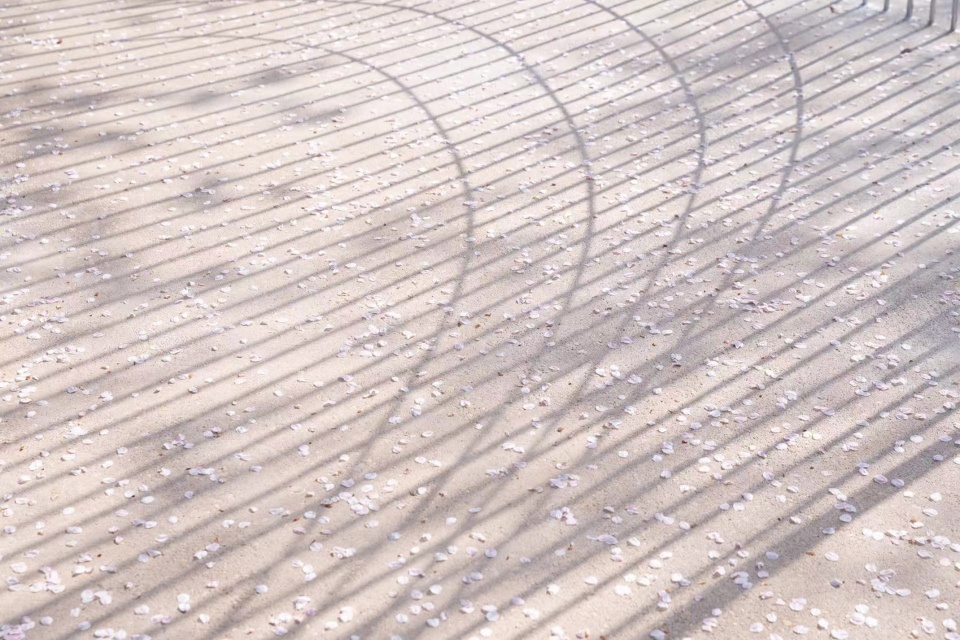 ▼仇英《独乐园图 》，The painting of solitary paradise by Qiu Ying

The theater also tries to re-establish a wonderful connection between people and nature through wonderful space construction, so that people can encounter the cherry blossoms and the surrounding nature in a wonderful way. In the painting of solitary paradise by Qiu Ying, a painter of the Ming Dynasty, there is a picture that shows that the ancients surrounded a pavilion with growing bamboo plates, while Gao Shize lay leisurely on his side under the bamboo. People in the midst can realize real sleeping landscape through the gap between the bamboo forests. There is no doubt that the essence of traditional Chinese architecture, gardens and pictorial Chinese painting lies in the wonderful contact between man and nature and the network structure of the theater, Countless visual holes have been formed, and people living and traveling have formed a dramatic look at the surrounding scenery. 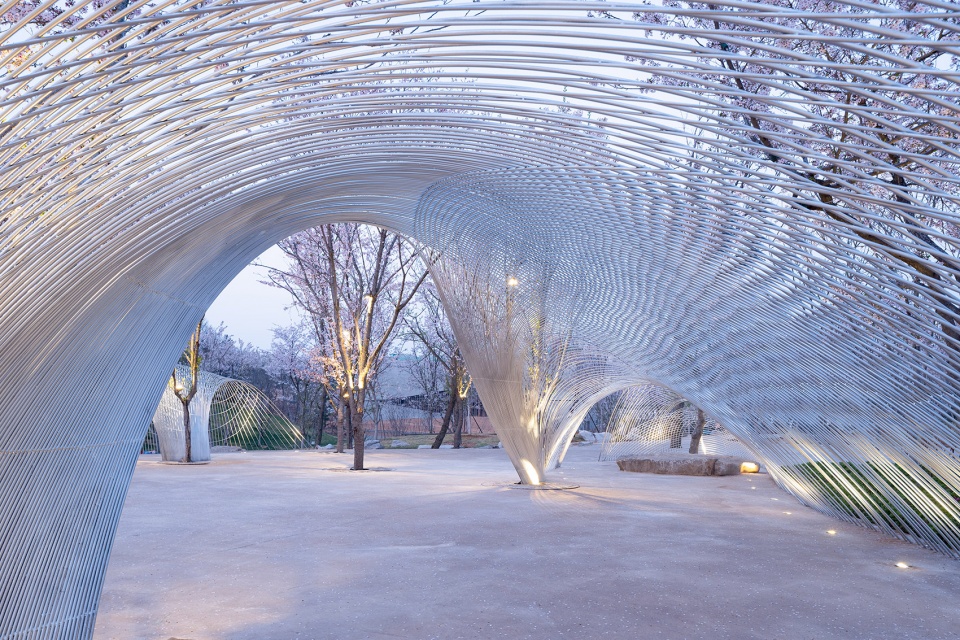 The theater also tries to make a clever combination of space, nature and art. First of all, it hopes to shape the theater into an aesthetic thing. It is not only a secular space used frequently, but also an independent aesthetic place. At the same time, it also forms an interesting relationship with nature. It hopes that the beauty of craftsmanship displayed by the silver lines will make people in the venue think about the beauty of form, Together with the multidimensional interaction between space and nature, it brings people a wonderful experience. 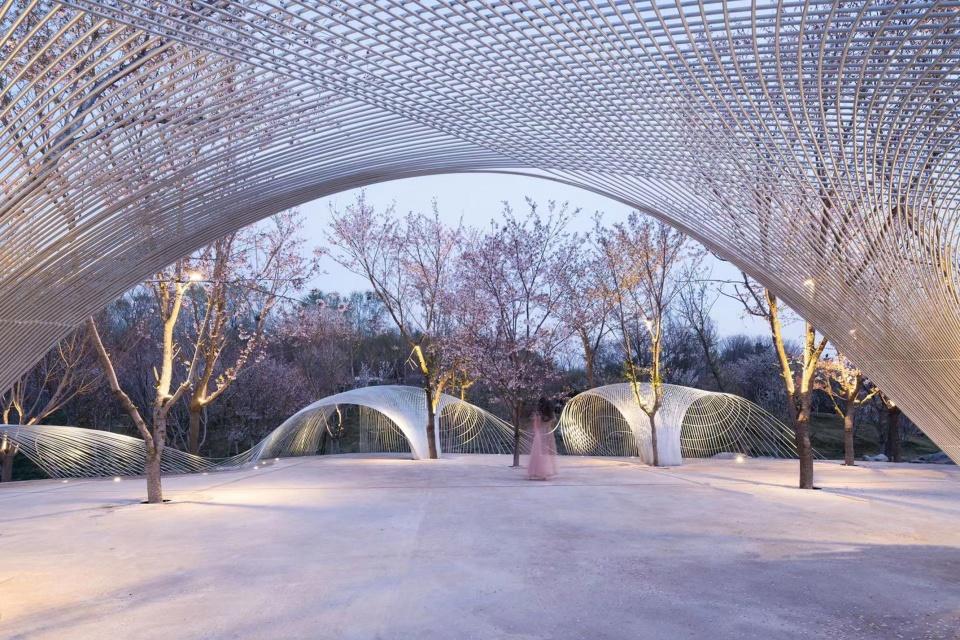 The most beautiful appeal of the theater is to hope that everyone in it and all things in nature will become the protagonist. You and I are not only the protagonist of the stage of our daily life, but also the protagonist of this specific stage. The surrounding mountains and forests, the wind and moon, the light color change reflected by the silver thread at four o’clock a day, the changing light and shadow on the muddy land, the falling cherry blossom rain, birds and butterflies, the dawn and sunset, and the mountain fog will also be the protagonists of the theater. 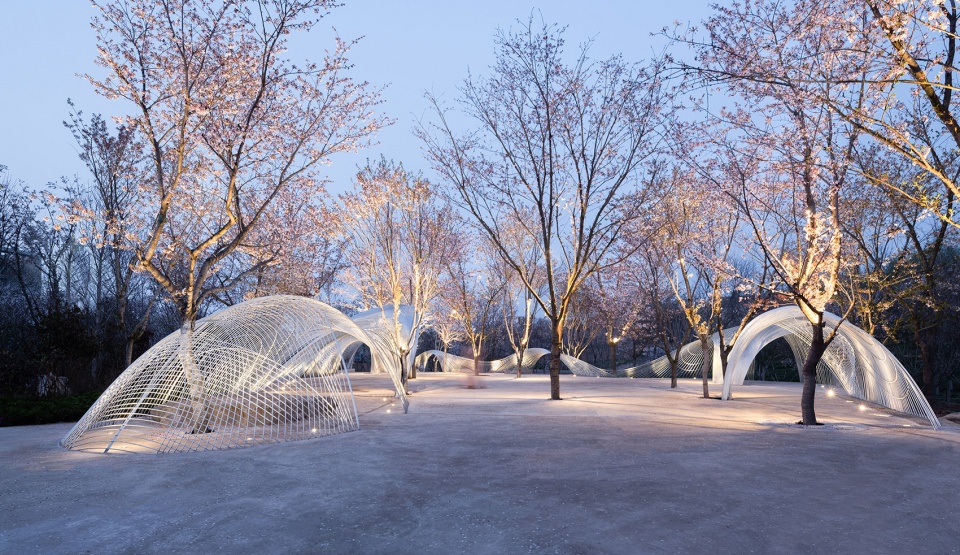 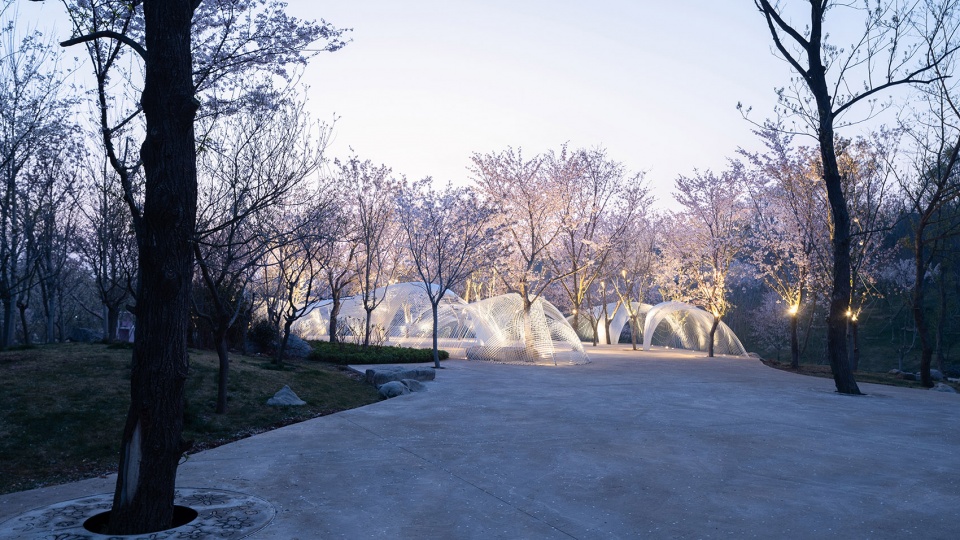 Life is like a drama, which is performed all the time. A person has countless roles and needs to play them all. Life is infinite and spirit is infinite. Boundedless theater hopes to respond to the participants’ spiritual infinite state through the unbounded form of material space. 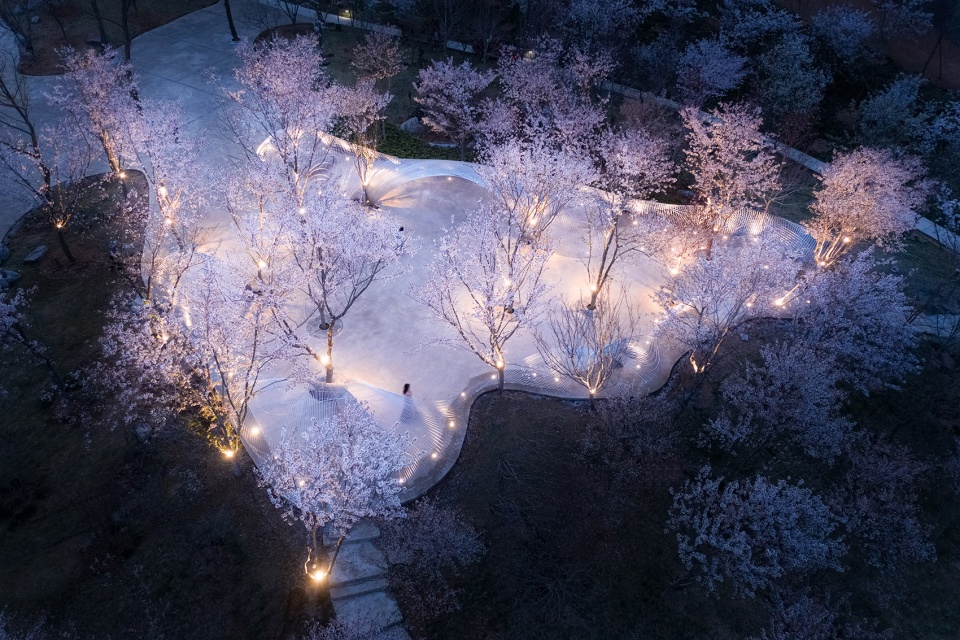